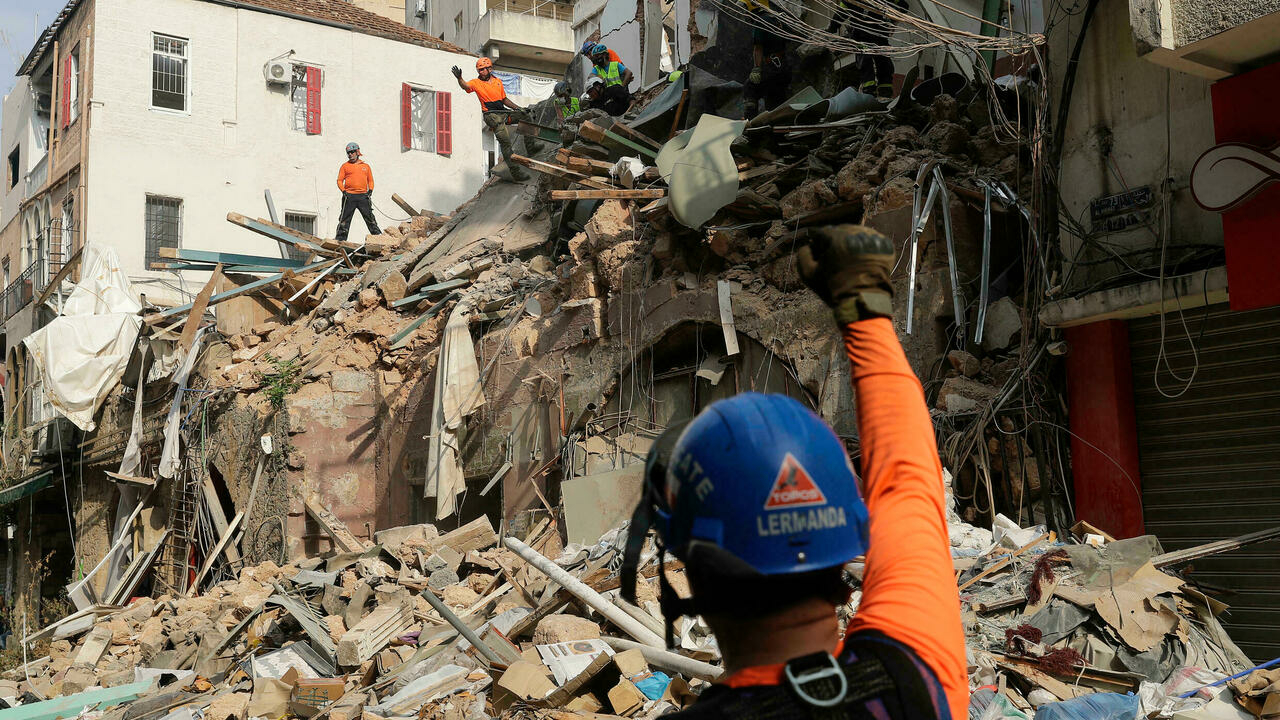 Rescue workers dig through the rubble of a badly damaged building in Lebanon’s capital Beirut, in search of possible survivors on September 3, 2020, a month after a mega-blast at the port destroyed much of the city. © Joseph Eid, AFP
Share:

Thousands of middle-class Lebanese families have moved overseas since the August 4, 2020, blast that rocked the city of Beirut. Some of those leaving town, particularly those who grew up during the 1975-1990 civil war, want a better quality of life and security for their children. But not everyone has the luxury of leaving.

When Fouad Assaf, 51, first felt the tremors of the explosion that rocked the capital last August 4, he rushed to the Red Cross in the hard-hit district of Gemmayze where he has volunteered as a first aid worker for the past 30 years.

As he searched through the rubble for survivors and helped treat the injured, he had a “revelation” – a “huge shock in that I realised that nothing here would change”.

While Beirut reeled from one of the largest non-nuclear explosions in history, a blast that killed 218 people, injured another 7,000 and destroyed much of the city, Assaf began making plans to leave.

Like his fellow Lebanese, he had been grappling with the growing struggles of day-to-day life in Beirut: queuing three hours for petrol, working around the lack of electricity, trying to feed his family on a sharply dwindling income and struggling to get hold of basic medicines like paracetamol.

Lebanon’s current economic crisis is “among the world’s worst in 150 years”, according to the World Bank, and it has thrown the country into turmoil.

Citizens are wrestling with soaring unemployment, record hyperinflation, the plummeting value of the Lebanese pound and growing food insecurity – as well as the Covid-19 crisis. More than half the people in the tiny Middle Eastern nation now live below the poverty line.

But for Assaf, the August 2020 explosion was the “coup de grace”. At the end of the summer he and his family leave Lebanon for Paris, where his children are now enrolled in school.

“Many people were thinking about leaving before August 4,” said Assaf, a technology entrepreneur and father of two young boys. “But the explosion woke them up.”

As a boy growing up during Lebanon’s 1975-1990 civil war, he spent his “entire childhood” hearing his parents say the war would end at any moment.

“This week, next month, the international delegate is coming, the United Nations is coming, this next week, next year, we’re going to get our Lebanon back,” he recounted in a sing-song voice.

“We don’t want to put our children through what we went through,” he said simply.

“There is no more middle class in Beirut,” he said. “Those who have the means to leave have left, the others will leave very soon … the middle class who stay behind are les nouveaux pauvres (the new poor).”

Stories of people living without electricity, mothers unable to feed their kids for a whole week and people being kicked out of their homes because they can’t pay the rent fill her Facebook feed all day long.

“It’s horrible, it’s horrendous what’s happening,” she said, deploring “the lack of medicine – the lack of everything”.

“A 10-month-old baby died because her father couldn’t find the medicine he needed in any pharmacy in Lebanon,” Dahrouge said.

In December 2019, just months into the country’s deepening financial crisis, she launched LibanTroc, an online bartering platform to encourage “solidarity among Lebanese”.

What began as a spontaneous gesture on Facebook – and a way of circumventing the extortionate exchange rates between the US dollar and the Lebanese pound – quickly grew into a large humanitarian community, run by volunteers and largely funded by small contributions from the Lebanese diaspora.

LibanTroc, which now has more than 73,000 members on Facebook, also helps the homeless and young drug addicts to get off the streets. Volunteers deliver medicine, food boxes and clothes to those in need. They help people find jobs, start businesses and look after their mental health.

“We deal with cases in a very transparent way,” said Dahrouge, explaining that every request for help is carefully verified. “So donors trust us.”

LibanTroc is her “daily dose of positivity”. Sometimes she closes 10 cases a day, some of them in less than half an hour. She’s delighted that no one has ever been turned down. And she’s endlessly touched by those “keen to pay it forward” – people who want to give them a stroller, or medicine they don’t need any more, so they can be redistributed.

But right now, Dahrouge, a mother of three, thinks about leaving Lebanon “every single day”.

She is tired of trying to cook for her kids without power, organising her day around three-hour electricity blackouts and managing the household budget on an ever-decreasing income.

She can no longer buy the breakfast cereals her kids are used to. Brands like Nescafé and Nutella have to be scratched off the shopping list.

She’s worn down by living with no social security and no free healthcare, trying to raise teenagers who are “traumatised” by the explosion.

“People are so depressed, drained and helpless, everyone is in ‘survival mode’,” she said. “We can’t see the light at the end of the tunnel.”

Sometimes she thinks about sending out her CV to try to get a job overseas. Before the economic crisis, she worked as a copywriter and advertising creative director – until the “clients stopped paying and advertising projects ran out”.

But the thought of leaving Lebanon is “heartbreaking”.

“Leaving your home, everything – just to try and fix your pieces back together,” she said.

“Just when I think of it I want to cry. I love my country. The warmth of the people … we are like one big family.”

But even if she decides to leave Lebanon, she can’t. All her savings – the money she put aside for her children’s education – are stuck in one of Lebanon’s moribund banks because of the liquidity problem.

She can only withdraw a small amount of Lebanese lira a month. Air tickets have to be paid for in “fresh dollars” – dollars transferred from overseas rather than “local dollars”.

But while Dahrouge, like many others in Lebanon, feels like she is “held hostage”, Lebanon’s ruling elite smuggled their money out of the country when the economic crisis first began.

“They are travelling, enjoying holidays and big weddings abroad while people are digging in garbage,” said Dahrouge with disgust. “They are monsters.”

‘Not a bankrupt state, a stolen state’

“Why is [Saad] Hariri on the French Riviera?” asked Maya Ibrahimchah, 48, founder of the NGO Beit el Baraka, referring to Lebanon’s former prime minister who was recently named PM-designate. “Where are the dollars that he stole?”

“All the superpowers know exactly where the money is. It’s placed in banks, in the United States and France and Switzerland. Give us back our money.”

“Lebanon is not a bankrupt state, it’s a stolen state.”

Back in Christmas 2018, Ibrahimchah was despairing of the “ingrained” corruption in Lebanese society when she met a retired French teacher living under a bridge.

Astonished to find this “well-dressed, highly educated woman” in such dire straits – teachers in Lebanon’s private sector have no pension plan – in February 2019 she opened a small supermarket where people shopped for free with points. Every month she renewed their points; those who could help out were given more.

She started out by helping some 228 families. Then six months later, when the revolution kicked off as the economy went into freefall, she found herself supporting 175,000 individuals.

“People were falling all around us like flies,” said Ibrahimchah. “What was happening was horrible – people were losing their lives, their livelihoods, dignity, [struggling for] food. It was surreal and it was only the beginning.”

Now, in the wake of the Beirut blast, her NGO has already rebuilt 311 homes and she plans to put some 32,000 children through school.

For in the days after the explosion, it was volunteers and NGOs – made up of the country’s youth and funded by the Lebanese diaspora – who swept the rubble and debris from the street. In the absence of the state, NGOs and associations looked after the wounded, collected the names of the missing and the dead, and provided the thousands of newly homeless citizens with food and shelter.

“I’m not saying this is a good thing,” she went on. “Every country needs to have a government.”

“But what’s important is that NGOs are setting new standards of governance,” she said, delighted that NGOs were managing to infiltrate “extremely corrupt” public institutions.

But given the raft of problems facing Lebanon, Ibrahimchah understands that leaving is the only option for some people at the moment.

“There are people in very, very difficult situations, people who lost everything and they need to save their lives.”

Every day she sees formerly comfortable families selling their pianos, their pictures, the dining room table and chairs – just so that they can afford to eat.

She understands that “extremely, extremely underpaid” nurses, some of whom are on salaries of $30 a month, need to leave for a while – and that then they’ll return.

But she’s disappointed by prominent doctors on fat salaries taking up posts at Harvard and Cambridge with no plans to come back to their country.

“Why couldn’t they even wait one year to see what was going to happen? Elections are going to take place in May, June – July if they get postponed. Couldn’t they – the wealthy elites – wait a few months?” she asked.

Ibrahimchah herself won’t be “going anywhere”.

“Citizenship is like a marriage,” she said. “It’s for better or for worse. If things go bad, you just try to fix it.

“How are we going to rebuild this bloody country if everybody keeps leaving?