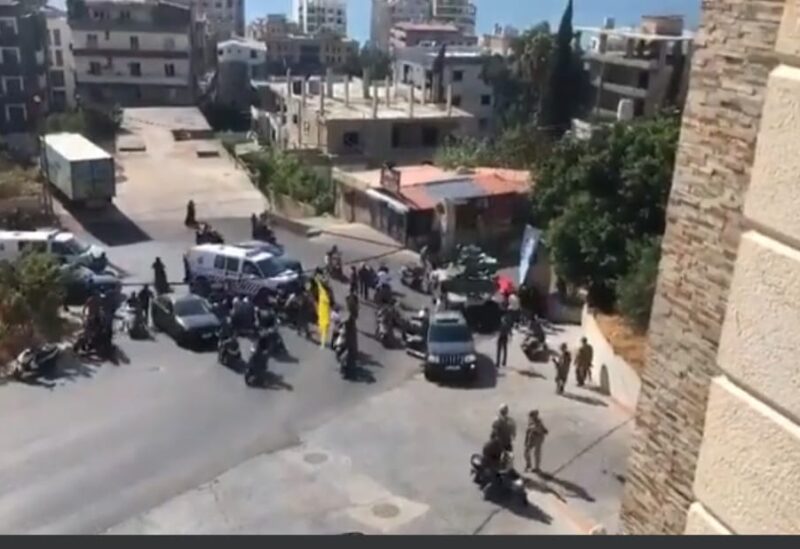 Deadly armed clashes erupted Sunday in Khalde area south of Beirut during the funeral of a Hezbollah operative who was killed overnight at a wedding in a vendetta shooting.
Share:

Deadly armed clashes erupted Sunday in Khalde area south of Beirut during the funeral of a Hezbollah linked official who was killed overnight at a wedding in a vendetta shooting.

Several people were also wounded in the exchange of fire.

The National News Agency said machineguns and RPG rockets were used heavily in the clashes, sparking panic among residents.

Media reports said three Hezbollah members were killed and several others were wounded when a convoy carryingShibli’s coffin came under gunfire near his Khalde home.

MTV said shots were fired at the mourners convoy from several buildings in an apparent “ambush.”

The army later said that it reinforced its presence in Khalde, warning that troops would “open fire at any gunman who may be spotted in the area.

MTV for its part reported that a “political agreement” was reached on “leaving things to the army.”

Shibli an official of the Hezbollah-linked Resistance Brigades, was shot dead overnight at a wedding in Jiye by a Ahmed Zaher Ghosn a member of Khalde’s Arab tribes.

The shooter, who was swiftly arrested, is the brother of 15-year-old teen Hassan Zaher Ghosn who was killed in Khalde’s clashes a year ago by Shibli .

The Iranian backed Hezbollah militant group is the only militia in Lebanon that was allowed to keep its arms at the end of the civil war in 1990 . It has grown to become stronger than the Lebanese army and now controls all the branches of government . Many Lebanese now consider Hezbollah as an occupying force .