Iran has abandoned its own people to support terrorists abroad 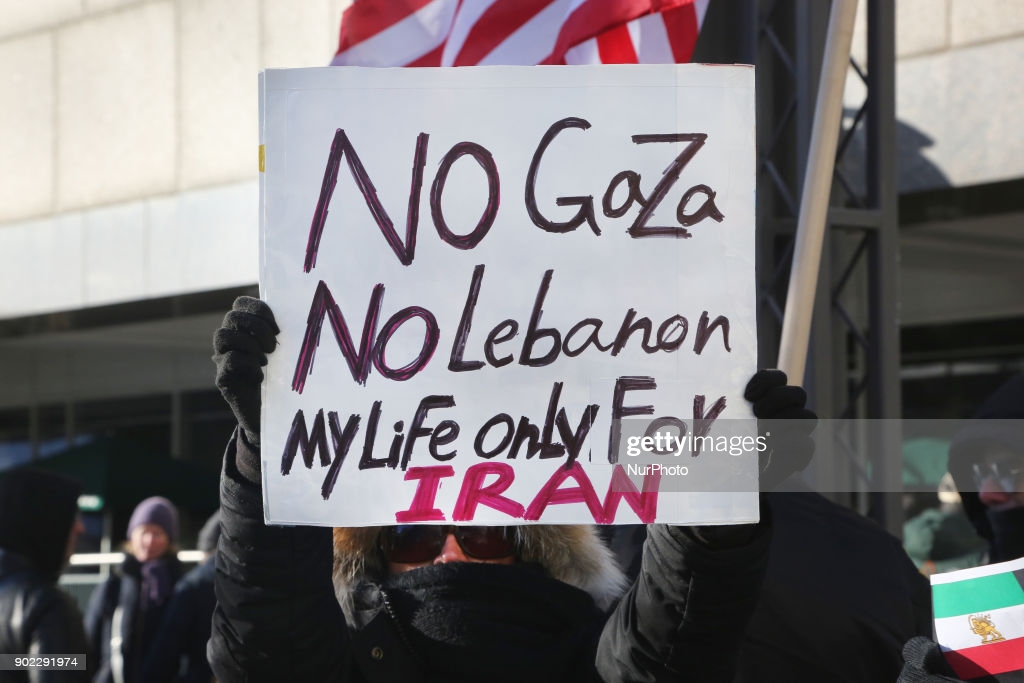 Protestor holds a sign saying ‘No to Gaza, No to Lebanon, My Life Only for Iran’ as hundreds of Canadians take part in a protest against the Islamic Republic of Iran in Toronto, Ontario, Canada, on January 06, 2018. Protestors showed their solidarity with anti-government demonstrators in Iran and their support of a national uprising of the Iranian people. Protesters called for a regime change for social justice and freedom and democracy in Iran. There was a also a call that power in Iran be returned to Reza Pahlavi, the former Crown Prince of Iran and the last heir apparent to the defunct throne of the Imperial State of Iran and the current head of the exiled House of Pahlavi. (Photo by Creative Touch Imaging Ltd./NurPhoto via Getty Images)
Share:

This week, Iranians marched in Tehran to protest a dire water crisis that has decimated farming in the southwest. But amidst the chants on the domestic front emerged another one: “No to Gaza, no to Lebanon; I sacrifice my life for Iran!”

Video circulating showing protesters in Tehran today chanting “No Gaza, No Lebanon, My Life is the Sacrifice of #Iran.” This is a similar chant to the ones used in previous rounds of protests, including during 2019. pic.twitter.com/If6PmyH4gh

The chant reflects a crucial complaint that hums like a heartbeat through the Iranian people: that the regime has not only deprived them of crucial freedoms but has sold them out to fight someone else’s battles.

And they are right.

In 1979, Ayatollah Ruhollah Khomeini’s Islamic Revolution turned Iran into a fanatic theocracy—one which continues to oppress Iranian citizens, particularly women and religious minorities. Then, just three years after the revolution, the nascent regime set its eyes on a dubious priority that had nothing to do with its own people: It established, trained, and funded the terrorist organization Hezbollah in southern Lebanon. It did this despite the fact that there were already urgent priorities at home; Khomeini had declared the United States an enemy of Iran, which meant that trade, tourism, and the other indisputable benefits of warm relations with the United States evaporated overnight.

Then came ground and aerial attacks from Saddam Hussein’s forces during the Iran-Iraq War, which resulted in one million combined Iranian and Iraqi casualties. Staples such as rice and sugar were rationed throughout the 1980s; ration lines would form before dawn in most cities. Bombs dropped on Tehran and Bagdad, including chemical weapons. As a child in pre-revolutionary Iran, I lived through that war.

And yet, while this was unfolding on the home front, Khomeini insisted on funding a war somewhere else. Thanks to his desire to “export the revolution” to the greater Middle East (as well as parts of Africa and Latin America), Khomeini’s Iran became the only country in modern history to have invested billions in terrorist fighters thousands of miles away in Lebanon, who did nothing to help win the deadly war at home.

But while Tehran smoldered, Hezbollah was indisputably successful in Lebanon. As former American ambassador in Beirut, Jefrey Feltman, wrote in a 2019 Brookings op-ed, “Hezbollah serves as the most successful, and the most deadly, export of the 1979 Iranian revolution.” When it came to establishing and training Hezbollah, Iran went all-in—while millions of Iranians, including my family and I, were running for our lives to escape deadly Iraqi air raids in Tehran, Shiraz and Isfahan.

The regime could have stopped with Hezbollah. After all, Hezbollah made sense: Its fighters were Shi’ite followers of Khomeini and sworn enemies of Israel, the regime’s ultimate enemy. Instead, the mullahs turned their gaze (and billions of dollars) toward two Sunni terrorist organizations—Hamas and Islamic Jihad.

An offshoot of the Muslim Brotherhood in Egypt, Hamas quickly created a charter that called for open genocide against “the warmongering Jews” in Israel. In the early 1990s, Hamas delegates attended two conferences on Palestine in Iran, cementing their ties with the regime.

For its part, Iran explained its support for the terrorist organization by reiterating its commitment to Muslims worldwide, as well as to Al-Quds, or Jerusalem. And some Iranians certainly bought this narrative. But most scratched their heads, and then turned their focus instead to how they would recover from eight years of war and food rationing. Meanwhile, their government was teaching Hamas fighters how to build and use suicide bombs against Israel and funding these endeavors; in the 1990s, the regime supported Hamas with roughly $50 million annually.

And it was then that, between Hezbollah and Hamas, Iranians started growing resentful over who was ultimately receiving their tax dollars.

Of all the regime’s needless belligerence and interference in the region, its obsessive support of Palestinian terrorists has perplexed average Iranians the most. Even with the current devastating water and power shortages at home, Supreme Leader Ayatollah Ali Khamenei has been tweeting more about Palestine than Iran. Iranians in Iran as well as the Diaspora use a well-known Persian adage to explain how deeply the regime seems to identify with Palestinian terrorists at the expense of its own citizens: “The bowl,” we say, “is hotter than the soup that’s in it.”

Forty-two years after the revolution, Iranians are still enraged that the regime effectively chooses foreign terrorist organizations over its own people. That’s why Iranians continue to take to the streets denouncing the regime’s foreign policies vis-a-vis Hamas in Gaza and Hezbollah in Lebanon.

Tehran, July 26, 2021
Protesters chant "Not for Gaza! Not for Lebanon! I sacrifice my life for Iran!"
A chant continuosly heard in protests since 2009, this is the foundation of what protesters want to be the countey's regional policy in the post-IR Iran.#IranProtests pic.twitter.com/DYAByGjsmI

Protestors have chanted “No to Gaza, no to Lebanon; I sacrifice my life for Iran!” since at least 2017. For anyone who follows news out of Iran, this chant, which is almost always accompanied by “Death to the dictator!” (Khamenei), signals an important and powerful turn in the trajectory of protests against the regime.

The Iran the protestors chant that they would give their lives for is not represented by the regime but by the 82 million people whose freedoms it represses, most of them secular and educated, who are thirstier than ever for democracy and prosperity. It’s painfully easy to see why they feel they’ve been sacrificed on the altar of state-sponsored terrorism; in 2008, the U.S. estimated that Iran gives Hezbollah roughly $700 million annually, while Hamas receives up to $100 million. Combined, that’s nearly $1 billion dollars—while many Iranians are starving.

Instead of addressing this concern, the regime has opted to silence the protesters, as is its wont; since July 15, when protests first erupted in the Khuzestan, up to 10 people have been killed by security forces, including bystanders, and over 100 have been detained.

Tabby Refael is a Los Angeles-based writer and civic activist, and co-founder of 30 Years After, a 501(c)(3) nonpartisan organization that promotes the civic participation of Iranian Americans.