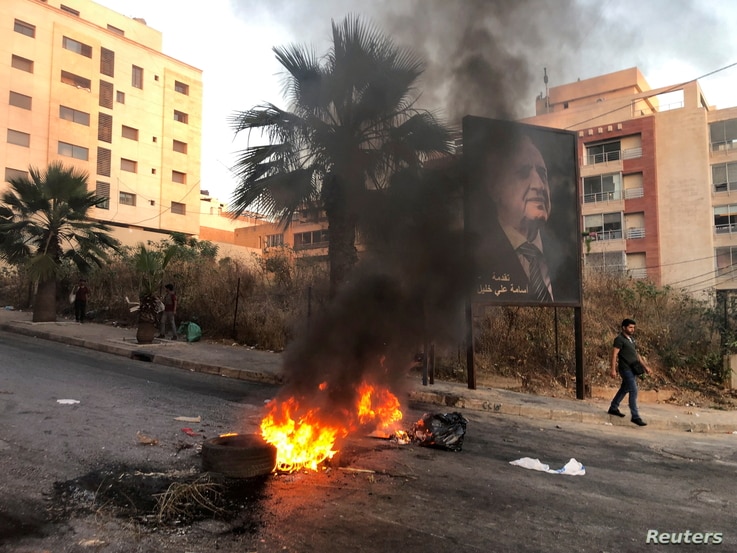 A man walks near a burning fire blocking a road, during a protest against mounting economic hardships, in Beirut, Lebanon, June 28, 2021.
Share:

The little girl wearing a red Mickey and Minnie Mouse tee-shirt was firm. “The rulers of this country are all trash,” she pronounced with indignation, and “they should resign; it would be better if someone from any other country came to rule us,” she told the host of a talk show on Lebanon’s MTV channel.

“We cannot get anything.  There is no medicine, no Internet, no fuel,” she said.

The audience applauded. The host sighed.

Since Marita Derzeh’s pronouncements, made July 15, the plight of her small Mediterranean country has only worsened, and while the youngster’s comments might reflect the views more of her parents than herself, they aren’t out of place in a country that is losing patience with the everyday struggle just to get by.

The Lebanese pound is now trading on the black market at 22,000 to the dollar, around 15 times the official rate of 1,500. The government is running out of hard currency to subsidize staple products, medicines and gas, and the most common sights in the country are miles-long lines of ill-tempered motorists to fill up tanks. Hospital directors say they are running out of medicine.

Lebanon’s PM-Designate Steps Down After Months of Deadlock

A deepening political crisis has left the Lebanese without a government for nine months, even as they endure an unprecedented economic meltdown

The World Bank has dubbed Lebanon’s economic free fall, which has seen the country’s currency lose 95% of its value against major foreign currencies since 2019, as one of the world’s worst financial crises in more than 150 years.

“The Lebanon financial and economic crisis is likely to rank in the top 10, possibly top three, most severe crises episodes globally since the mid-nineteenth century,” it said in a recent report. And it largely blames the country’s sectarian political elites for the slow-motion crisis.

“This illustrates the magnitude of the economic depression that the country is enduring, with sadly no clear turning point on the horizon, given the disastrous deliberate policy inaction,” the bank said. It warned, “The social impact of the crisis, which is already dire, could rapidly become catastrophic.”

Ordinary Lebanese families have seen their purchasing power plummet and are desperate.

And with more than half the population now living below the poverty line, the Crisis Observatory at the American University of Beirut reported this week that families would have to spend around five times the minimum wage just to put sufficient food on the table, never mind paying for utilities, gas and hard-to-find medicine.

The observatory, set up to monitor Lebanon’s crisis, said the cost of food has soared by 700% over the past two years with increases quickening. “The price of a basic food basket increased by more than 50 percent in less than a month,” Nasser Yassin, head of the observatory told AFP Wednesday.

An international conference co-hosted by the U.N. and France, the country’s former colonial ruler, scheduled August 4 to discuss the crisis in Lebanon, might be the last chance to save the failing state of Lebanon from meltdown, warn French officials.

The conference coincides with the first anniversary of the devastating Beirut port explosion, which left more than 200 people dead, about 6,500 injured, and flattened part of the Lebanese capital. Many blame Lebanese officials for storing hundreds of tons of highly explosive ammonium nitrate at the port, which ignited.

“The moment of truth is fast approaching,” a senior official at the French foreign ministry told VOA. “The politicians reform or they don’t; unless they do, there’s not much we can do to help pull the abyss,” he added. French officials are especially alarmed about the stability of Lebanon’s army, a key state institution that’s being relied on to maintain security and law and order in a country that’s on the brink of social explosion and breakdown.

Earlier this week the commanders of Lebanon’s army warned of mounting turmoil in the wake of last week’s resignation of Saad Hariri as Prime Minister-designate, a Sunni Muslim centrist. “The army is a deterrent to chaos,” General Joseph Aoun told his soldiers.

Lebanon’s armed forces need an immediate injection of $100 million to cover the basic needs of its soldiers, according to Gen. Youssef Haddad. He has warned publicly that the country’s armed forces will be in “critical condition” by September and that, “if the army collapses, Lebanon will be lost.”

France, the U.S. and Saudi Arabia have earmarked the country’s armed forces as the key institution to save. In Riyadh earlier in July, their diplomats discussed subsidizing the Lebanese Army with monthly allowances for 80,000 soldiers and officers, say Western and Arab diplomats. The average salary of a soldier was before the economic crisis worth around the equivalent of $800 a month, now it is about $80.

Diplomats and analysts say the country’s brutal 1975-1990 civil war shows the danger, if the military were to falter. Marco Carnelos, a former Italian diplomat, says Lebanon is already a failed state. “But there is always further to fall, and Lebanon seems to be heading there,” he wrote in a commentary for the news site Middle East Eye, adding, “When will the world step in?”

He complains: “No western power other than France has yet dedicated to Lebanon the attention it deserves.” U.S. diplomats say the Biden administration also deserves credit for trying to get the international community to focus more on Lebanon and has warned not only of the mounting humanitarian crisis in the country but the danger of severe regional consequences.

On Thursday, U.S. Secretary State Antony Blinken added his voice to the widespread dismay at the resignation of Saad Hariri, who said he was abandoning his efforts to form a government nine months after accepting the challenge because of political squabbling between Lebanon’s factions. The 51-year-old Hariri, who served as prime minister twice before, blames obstructionism by Lebanese President Michel Aoun, an ally of the radical Shi’ite movement Hezbollah, which is backed by Iran.

“Lebanon’s political class has squandered the last nine months,” Blinken complained in a statement. “The Lebanese economy is in free-fall and the current government is not providing basic services in a reliable fashion.” He added, “It is critical that a government committed and able to implement priority reforms be formed now.”

But like France and other international donors, the Biden administration is conditioning support for an IMF bailout of Lebanon on the formation of a pro-reform government and the implementation of financial and economic changes. They say without them the state will continue to slide toward failure.

Western diplomats say the August 4 conference in Paris will likely focus on two key areas: how to use both carrots and sticks to cajole the country’s political elites to agree on reforms, and if that fails, how to mitigate the humanitarian crisis and maintain the stability of the country’s armed forces.