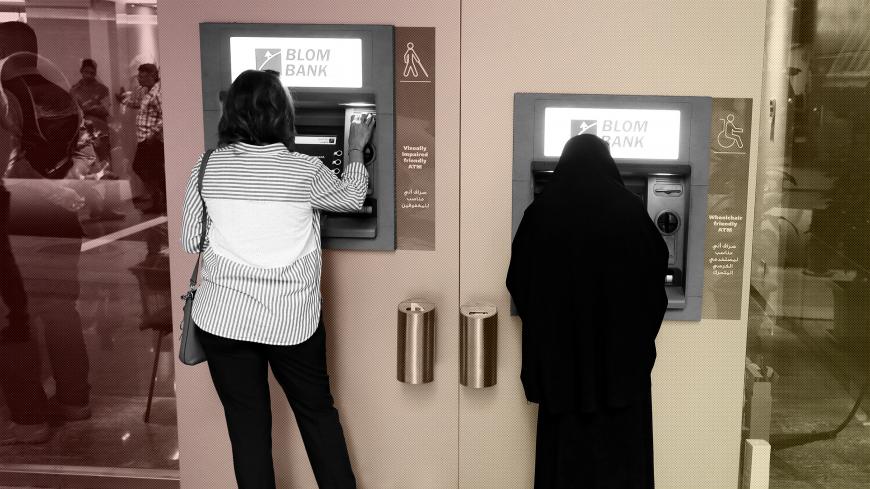 File photo of an ATM machine in Beirut Lebanon- Syrians have used Lebanese banks to save, move and invest capital. This was the case even during the Lebanese war years, and especially during the last decade or so of war in Syria. The collapse of the Lebanese economy is closely tied to the Financial crisis in Syria. While the Lebanese pound lost over 90 % of its value The Syrian pound has lost 98.5 % of its value .
Share:

Rightly, although for all the wrong reasons, Lebanon has been a frequent fixture in global news bulletins at least since the major explosion that devastated its capital, Beirut, almost a year ago. Most pressing has been an economic crisis that is unprecedented in the history of the modern state. A major failing of the country’s banking sector, which experts have described as a Ponzi scheme, and the resultant lack of foreign currencies have precipitated the much-discussed economic crisis and its many repercussions. One consequence, however, is rarely discussed: The fact that Lebanon’s neighbor, Syria, which continues to reel from the effects of war, its loss of revenue-generating territory and the drain on its human capital, is also reeling from devastating and seemingly unending economic shocks.

One of the most direct effects of the collapse of the Lebanese banking sector is the loss of private Syrian capital. Since Lebanon implemented its 1956 Law of Bank Secrecy (which was only lifted by parliament temporarily for one year in December 2020), many Arabs — Syrians included — have used Lebanese banks to save, move and invest capital. This was the case even during the Lebanese war years, and especially during the last decade or so of war in Syria.

As the internal unrest in Syria intensified in the first half of the 2010s, and as the growing conflict seemed to become more and more drawn out, Lebanon was the quickest route for people to take cash out of the stagnating Syrian economy. While the Syrian government worked to actively curtail this trend, Lebanon’s banks became, in some cases, the only repository for private Syrian cash, especially after the increasing imposition of sanctions on the country and restrictions on the global financial dealings of its citizens.

In a rather surprising gesture, Syrian President Bashar Assad made reference to these funds in his fourth inauguration speech, which he delivered on Saturday. Assad said estimates for the amount of cash Syrian citizens are unable to recover from Lebanon’s banks range between $40 billion and $60 billion. While making it clear that this includes huge sums that were illegally siphoned off across the border, the implication is to claim ownership of parts of any potential Lebanese economic bailout, as well as the huge losses in it.

Regardless of the exact sum, and of how problematic Saturday’s occasion was to many Syrians inside as well as outside the country, the point Assad made hit upon a fact. For Syrians, especially those whose entire savings were deposited across the border, having just a fraction of their cash after all withdrawal transactions is not an easy bullet to bite, especially after decades of hard work and responsible fiscal decisions. However, for most Syrians today, some cash is better than none.

Entire swaths of the Syrian population are surviving on rationed food packages, mostly sent by international donors. This is not unlike the situation of Syrians who have fled the country, including to refugee camps in Lebanon. They too are undergoing increasing difficulties in finding their daily bread. When I read about local corner shop closures in Beirut or see reports on middle-class families of two full-time professional parents struggling to make ends meet, I wonder if Syrian families who have been confined to the refugee camps without permission to work have bread on a daily basis. I know some in Syria do not.

After enduring waves of austerity measures over the past decade, compounded by the economic slowdown caused by the coronavirus pandemic, Syrians are now facing even bleaker uncertainties than those of their Lebanese neighbors. Early this month, a 50 percent salary increase was announced by the government. The next morning, the price of bread increased by 100 percent. Overnight, the cost of a standard batch of bread went up from 50 Syrian pounds to 100. Against the US dollar, the value of the Syrian pound, or lira, continues its steep decline. One dollar this week equaled 3,150 Syrian lira on the black market and 2,500 at Central Bank tills. Compared with pre-war exchange rates of between 50 and 52 Syrian lira to the dollar, this shows that the numeric increase in salaries is an effective decline in purchasing power.

For better or worse, Syria’s financial well-being has been closely tied to that of Lebanon. Lebanon, after all, shares with Syria the vast majority of its land border, which is permeable not only to the flow of goods, people and many other things both legally and illegally, it is also permeable to crises and shortages, as well as to the effects of sanctions and corruption, officially and unofficially.
As the Syrian president entered and exited the marble-floored hall of the People’s Palace, accompanied by music from the Syrian National Symphony Orchestra, I wondered how many of those musicians playing near the colored marble fountain, or indeed of those attending the exclusive invitation-only event, had all the meals they and their children needed last week.

Mutual dependency between Lebanon and Syria, and the inevitability of crises spilling across their shared border, make me wish that more expatriates might visit this summer. That is the only chance for many people to have their daily bread, probably for months to come.

* Tala Jarjour is author of “Sense and Sadness: Syriac Chant in Aleppo.” She is visiting research fellow at King’s College London and associate fellow at Yale College.