Syria accuses Israel of carrying out strike, 2nd this week 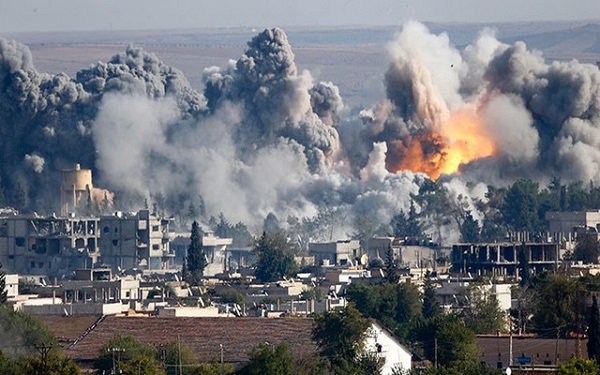 Syria accused Israel of carrying out an airstrike in a central province early on Thursday. srael has launched hundreds of strikes against Iran-linked military targets in war-ravaged Syria over the years but rarely acknowledges or discusses such operations. Airstrikes also destroyed ammunition and weapons depots belonging to the Iranian backed Lebanese militia Hezbollah in Homs.
Share:

DAMASCUS (AP) — Syria accused Israel of carrying out an airstrike in a central province early on Thursday, the second such attack this week. The aerial attack caused material damage, it said.

The country’s state news agency quoted an unidentified Syrian military official as saying the air defense systems shot down most of the missiles in the attack in the region of Quseir in Homs province. The report did not say what was targeted.

Neighboring Lebanon’s president, Michel Aoun, urged his foreign minister to protest with the United Nations the use of Lebanese airspace to carry out attacks on Syria. Lebanese media meanwhile reported that a rocket fell inside Lebanon — in Lahfed, a village in the north — on Thursday, causing a large crater in the ground.

A video captured by residents, distributed on social media and broadcast on Lebanese TV, shows a crowd gathering around the crater in the night, inspecting the rocket. One resident says: “If this fell 500 meters away, it would have damaged many homes.”

Israel has launched hundreds of strikes against Iran-linked military targets in war-ravaged Syria over the years but rarely acknowledges or discusses such operations. Late Monday, Syria reported an Israeli airstrike near northern Aleppo province, but did not elaborate.

The Britain-based Syrian Observatory for Human Rights, a war monitor that has activists on the ground in Syria, said Monday’s strikes targeted weapons depots belonging to Iranian-backed militiamen operating in Aleppo’s Safira region.

The group also confirmed Thursday’s strikes, saying they destroyed ammunition and weapons depots belonging to the Lebanese militant Hezbollah group in Homs. The Iran-backed group has been operating in Syria for years, siding with President Bashar Assad’s forces in the devastating civil war and helping the government reclaim most of the country.

Separately, the Israeli military said it detained two people after they were seen crossing from south Lebanon into Israeli territory. In a statement, it said the suspects were detained after an extensive search of the border area. Following initial questioning at the scene, the two appear to be job seekers, it added.