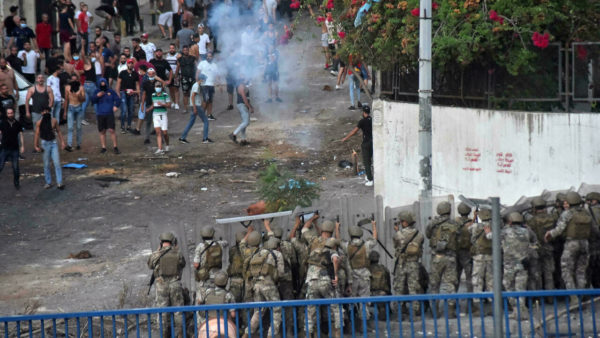 Lebanese soldiers clash Thursday with supporters of Lebanon’s Saad Hariri, who stepped down as prime minister-designate saying he was unable to form a government – AFP
Share:

Lebanon will steer deeper into abyss after the exit of premier-designate Saad Hariri, and as France prepares to host an aid conference on the first anniversary of the country’s port blast.

Hariri’s exit on Thursday comes amid a financial downturn branded by the World Bank as one of the planet’s worst since the mid-19th century.

It leaves the country rudderless as Lebanon faces soaring poverty rates, a plummeting currency, renewed street protests and shortages of basic items including medicine and fuel.

“Lebanon, towards more danger,” read a headline on the front page of the country’s Annahar newspaper on Friday.

France, which has spearheaded international efforts to lift Lebanon out of crisis, said on Friday that it will host an aid conference on August 4.

Organised with the support of the United Nations, it coincides with the first anniversary of a Beirut port explosion that killed more than 200 people and levelled swaths of the capital.

The conference will aim to “respond to the needs of the Lebanese whose situation is deteriorating every day,” France’s foreign ministry said in a statement.

The international community has pledged millions of dollars in humanitarian aid since last year’s port blast, but made the money conditional on installing a government capable of tackling corruption.

Even as international pressure led by France mounted, with the European Union threatening sanctions on Lebanese leaders, political squabbling has repeatedly stymied efforts to form a government.#photo1

The French foreign ministry said Hariri’s failure to form a government “confirms the political deadlock which Lebanese leaders have deliberately continued for months, even as Lebanon sinks into unprecedented economic and social crisis.”

After nine months of deliberations with President Michel Aoun over a cabinet line-up, Hariri threw in the towel on Thursday.#photo2

He accused Aoun of seeking a share in government that would give his supporters a “blocking third” of seats — effectively a decision-making veto — a charge the president has denied.

“If I formed the government that Michel Aoun wanted… I wouldn’t have been able to run the country, because this isn’t a cabinet I can work with,” Hariri told Lebanon’s Al-Jadeed TV after he stepped down.

Aoun will now have to call on parliament to pick a new premier-designate, who will be tasked with assembling another cabinet, which in turn will have to be approved by the president and political factions.

This takes the political process back to square one, and Lebanese media warn there is a clear risk of many more months of drift, a delay the country can ill afford.

With cabinet berths and parliamentary seats distributed according to religious sects, Harri’s exit will further complicate negotiations, as Hariri is widely seen as the pivotal representative of the country’s Sunni Muslims.

Media reports have circulated the name of former premier Najib Mikati, who was last in power in 2014, as a likely favourite to replace Hariri.

The Al-Akhbar newspaper reported Friday that Mikati, a Sunni Muslim, “is the most likely option”.

Hariri has already said he would not endorse Mikati’s candidacy.

Hariri, who has previously led three governments in Lebanon, is the second candidate to fail at forming a government in less than a year.#photo3

He had been nominated prime minister designate in October 2020, replacing Mustapha Adib, a relatively unknown diplomat.

Adib had been nominated in late August, but quit less than a month later, because of resistance from factions over his proposed line up.

Outgoing prime minister Hassan Diab, who resigned in the wake of the August 4 explosion, has lingered on in a caretaker capacity until political leaders can agree on a new premier.

“It is critical that a government committed and able to implement priority reforms be formed now,” he added.

Jean-Yves Le Drian, foreign minister of ex-colonial power France, said Hariri’s move was proof that “Lebanese officials are unable to find a way out of the crisis,” accusing them of “cynical self-destruction”.

The Lebanese pound, officially pegged to the dollar at 1,507, plunged to new lows on the black market following Hariri’s announcement, selling for more than 21,000 to the greenback . On Friday the pound hit another low of 23, 000 to the dollar

The currency crash sparked roadblocks and protests on Thursday night amid growing anger against a ruling class long-accused of negligence and corruption.