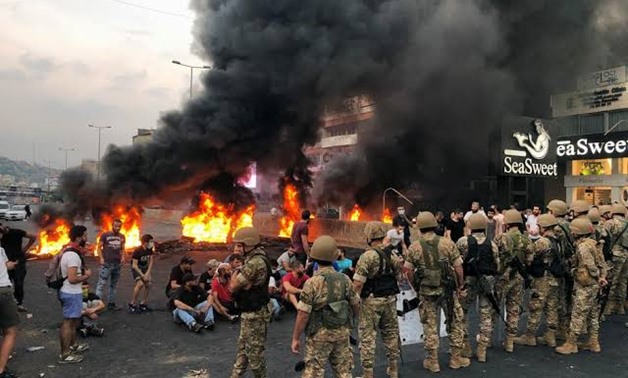 The Lebanese army said on Wednesday it had started clearing roadblocks eight days after protesters burnt tyres to block roadways across the country in anger over the country’s economic meltdown and political deadlock.
Share:

By Emma Graham and Hadley Gamble

Lebanon’s armed forces need an immediate $100 million to cover its soldiers’ basic needs, a general told CNBC, as a currency crisis pushes their salaries below the poverty line.

His comments come as the country’s military tries to avoid collapse.

“Without the morale and the motivation of our soldiers, it’s going to impact negatively the mission,” Brig. Gen. Youssef Haddad told CNBC. “If the army collapses, Lebanon will be lost.”

He said that by September, the army will be in a “critical condition.”

The Lebanese Armed Forces (LAF) pay the equivalent of $84 dollars per month to enlisted soldiers based on the exchange rate of 15,500 Lebanese pounds per U.S. dollar.

With the currency now approaching 20,000 LBP to the dollar on the black market, that salary now places the average soldier below the poverty line.

Haddad said each soldier needs “an additional bonus to help him cover his basic needs on a monthly basis for 12 months” — which should total around $90 million to $100 million, he said.

Lebanon is in its worst economic crisis in decades after the country failed to form a government that could enact reforms and access crucial aid.

The Mediterranean country of 6 million has seen its currency lose 90% of its value over the last 18 months on the informal market, hitting new lows against the U.S. dollar this week on the black market. Food inflation has soared to 400%.

Since 2017, Lebanon’s army has adopted an austerity policy in reaction to the crisis, instituting a hiring freeze and a moratorium on early retirement.

Many soldiers with families have sought second or third jobs. Such work violates official policy of the army, but commanders say they’re sympathetic to their soldiers’ plight.

“There is a hidden contract between the command and the soldiers,” Haddad said. “We ask the soldiers to work 24/7, and maybe to sacrifice his (or her) life, to be killed in action for the interest of his country.”

“The only thing that we can offer to the soldier is the peace of mind that we are here to protect your family, to ensure they have the adequate medical coverage and that the kids (can go) to school,” he added.

There’s also growing fear that disgruntled soldiers could leave the Lebanese military and join other armed groups that can offer higher salaries and more lucrative benefits than the LAF.

Funding for the army

The Lebanese army — a force which the defense ministry says is 77,000 to 80,000 strong — is viewed by many in the international community as the country’s only honest broker.

They’ve also been deeply criticized for their handling of the 2019 protests, which is outside the army’s official mandate.

Still, convincing foreign governments or members of the Lebanese diaspora to the pay the bill will be a tough sell.

Years of donations by Gulf-Arab countries have come to a halt as Western nations call for Lebanon’s intractable political class to step aside in favor of an interim cabinet to get reforms moving.

The army’s austerity could hit operations like border security hard, important for a country that shares a border with Syria to its north and east. To the south of Lebanon lies Israel.

The LAF patrols external borders, while official checkpoints are under the authority of customs and Internal Security Forces.

David Hale, former U.S. Under Secretary of State for Political Affairs, told CNBC: “We continue to provide our assistance to the legitimate institution that is meant to defend Lebanon and secure Lebanon, and that’s the army.”

The United States has sent over $2.5 billion to the country’s army since 2006, and pledged a further $120 million in May