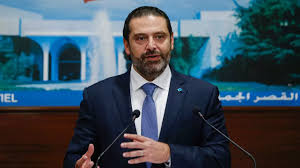 Prime Minister-designate Saad Hariri on Thursday announced that he is quitting the government formation mission, following talks with President Michel Aoun in Baabda.

“I met with the President and we held consultations over the government. During the discussions, the President requested essential changes and we discussed the issue related to the vote of confidence and the issue of naming the two Christian ministers,” Hariri said after a 20-minute meeting.

“I asked President Aoun if he needs more time to discuss the line-up but he answered that it seems that we won’t agree, that’s why I submitted to him my resignation and may God help the country,” Hariri went on to say.

Hariri had been nominated for the post in October 2020, as a long-running political and economic crisis intensified following a devastating port blast in Beirut in August that killed more than 200 people and forced the previous government to resign.

The development is likely to plunge the country further into chaos and uncertainty. Lebanon is going through an unprecedented economic crisis, described by the World Bank as one of the worst in the world in 150 years.

Hariri’s move comes after weeks of a stalemate in renewed efforts to resolve the political deadlock and following a quick trip to Cairo, a close ally. In a meeting with Aoun on Wednesday, Hariri had proposed a new 24-minister Cabinet line-up and said he expected a response from Aoun by Thursday.

Hariri, 51, resigned from his post in October 2019 in a bow to nationwide protests which had demanded major reforms and condemned the entire political class. A year later, he was named once again to the post by parliament amid a crippling economic crisis and months after the massive explosion that compounded the country’s woes.

Lebanese pound is the first victim

Following PM Saad Hariri’s announcement to quit his mission of forming a cabinet , the Lebanese pound crashed to an unprecedented of 21500 LL to the dollar

According to media reports , “young men in Tyre destroyed the contents of some restaurants and cafes located on Parliament Speaker Nabih Berri Avenue and expelled customers from them, after hearing Prime Minister-designate Saad Hariri’s resignation over for government formation.”