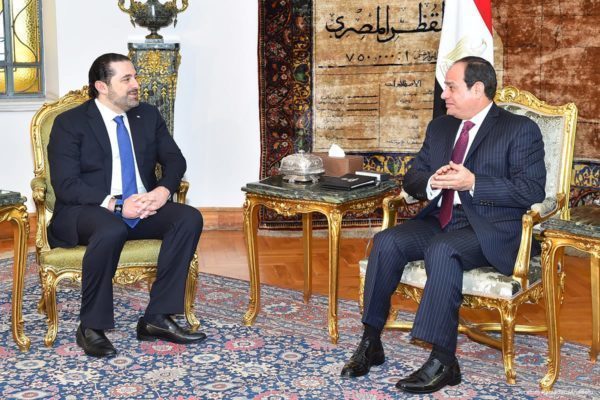 Lebanon is battling an economic meltdown dubbed by the World Bank as one of the deepest depressions in modern history.

The financial crisis, that has propelled more than half of the population into poverty and seen the value of the currency drop by more than 90% in nearly two years, has been deepened by political deadlock.

Hariri has been at loggerheads for months with President Michel Aoun over forming a new government. He is due to meet Aoun at the Baabda presidential palace on his return from Cairo.

Earlier on Wednesday Aoun said he hoped he hoped Hariri would carry “positive indications” to the meeting, and said efforts were still under way to form a cabinet.

In Egypt, Sisi welcomed Hariri, “reaffirming Egypt’s full support for Hariri’s political path which aims at restoring stability to Lebanon”, and for his attempts to deal with challenges including the formation of a government, a presidency statement said.

Hariri also met Egyptian Foreign Minister Sameh Shoukry, who stated Egypt’s support for Lebanon’s “exit from the current situation, and the necessity for all Lebanese parties to prioritise Lebanon’s highest interest over any narrow interests”, according to tweets from Hariri and the Egyptian foreign ministry