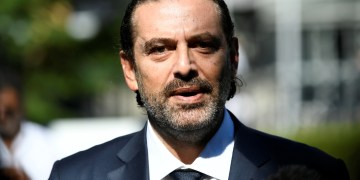 Egypt has asked PM-designate Saad Hariri not to quit his mission of forming a new government, agreeing with him on a “timeframe” for consultations over the formation of the much-awaited cabinet, media reports said on Wednesday, shortly after Hariri met with Egyptian President Abdel Fattah al-Sisi.

Egypt will “invite several Arab countries to coordinative meetings over Lebanon and will work on creating an international economic group for supporting Lebanon,” the sources added.

Furthermore, a top-level Egyptian delegation will visit Beirut soon to back the government formation efforts and Cairo has informed Hariri that it will lead “an Arab dialogue aimed at supporting Lebanon and preventing the escalation of the situation,” the sources went on to say.

Egypt also told Hariri that it will “fully” support the Lebanese Army and security agencies.

An official statement distributed by Hariri’s office meanwhile said that al-Sisi “stressed Egypt’s full support for PM-designate Hariri’s political course that is aimed at restoring stability in Lebanon and dealing with the current challenges.”

Commenting on the “government formation efforts,” the Egyptian president called on the Lebanese parties to unify their efforts to “pull Lebanon out of its current state” and to “put Lebanon’s national interest first.”

Lebanon is battling an economic meltdown dubbed by the World Bank as one of the deepest depressions in modern history.

The financial crisis, that has propelled more than half of the population into poverty and seen the value of the currency drop by more than 90% in nearly two years, has been deepened by political deadlock.

Hariri has been at loggerheads for months with President Michel Aoun and his son in-law MP Gebran Bassil over forming a new government. He is due to meet Aoun at the Baabda presidential palace on his return from Cairo.

Earlier on Wednesday Aoun said he hoped he hoped Hariri would carry “positive indications” to the meeting, and said efforts were still under way to form a cabinet.