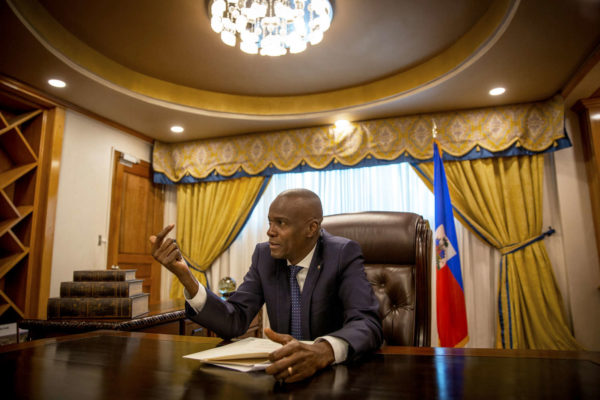 A Haitian man arrested under suspicion of playing a leading role in the assassination of President Jovenel Moïse appears to have presented himself as a potential leader of the impoverished Caribbean nation for as long as a decade.

Police said Christian Emmanuel Sanon, 63, planned to assume the presidency and hire some of the men involved in the attack on Moïse as his security team. Sanon, who reportedly has lived on-and-off in Florida for about two decades, landed in Haiti on a private plane in early June with “political objectives,” Haiti’s police chief, Léon Charles, told reporters Sunday. He recruited the team through a Venezuelan security firm based in the United States, but its mission changed when one member was presented with an arrest warrant for Moïse.

Many questions remain about the bizarre plot that led to the president’s fatal shooting July 7 at his home in Port-au-Prince, Haiti’s capital. Chief among them: how a man who filed for bankruptcy in Florida in 2013, according to the Miami Herald, listing himself as a church pastor, could be behind what authorities have described as a commando operation.

A video posted on YouTube in 2011 and titled “Dr. Christian Sanon — Leadership for Haiti” presents Sanon, who refers to himself as a doctor, as a potential leader of the country. In it, the speaker denounces Haiti’s leaders as corrupt plunderers of the country’s resources.

Haiti only has limited natural resources. The Washington Post was unable to verify the authenticity of the video or the identity of its speaker. Haitian authorities haven’t released any photos of Sanon.

A post on a now-defunct website, “Haiti Lives Matter,” presents Sanon as a leader of a coalition “chosen to lead Haiti,” according to an archived version of the page. The website lists several other members of his “transitional government,” including academics, a business person and even a senior member of Haiti’s permanent mission to the United Nations.

When reached by The Post for comment, one of the people named on the site said they had never even heard of Sanon and suggested their details appeared to have been clipped from an old résumé. The person spoke over the phone on the condition of anonymity to avoid repeating details of what they said was a falsified account of their involvement in any plot to install a new government.

“The whole thing is stupid. You’re not going to become president like this,” the person said. The person, a retiree of Haitian descent who has not lived in the country for years, said they had “zero intention of going to Haiti. Especially with my name now on a website.”

Haiti’s U.N. delegation didn’t immediately respond to an emailed request for comment about its employee.

The announcement of Sanon’s arrest came as senior FBI and Department of Homeland Security officials arrived in Haiti Sunday to discuss how the United States might assist after Moïse’s killing last week.

Police said two other people have been implicated in the alleged scheme as “intellectual authors” of the assassination, but did not name them. Police last week arrested two Haitian Americans who allegedly worked as interpreters for the team; they have taken at least 21 people into custody, most of them Colombians.

Sporadic gunfire erupted in Port-au-Prince over the weekend, piercing the relative calm that followed Moïse’s killing as violent gangs threatened to fill the power vacuum in a country that has no clear leader. One powerful gang leader called his followers to the streets as residents shuttered their doors against the possibility of more bloodshed in a city already terrorized by criminal violence.

In the mystery and confusion immediately after Moïse’s assassination, the gangs gave the city something of a reprieve from the torrent of gunfire that has killed hundreds this year. But while answers remain elusive — the motive for the president’s killing remains unclear, and at least four men have claimed they are in charge — the peace has been broken.

The city’s most powerful gang leader, Jimmy “Barbecue” Cherizier, called followers into the streets in coming days to demand “justice against this cowardly assassination carried out by foreign mercenaries in the country.” In a video message Saturday, the self-styled revolutionary asked other gang leaders to join him in the violence.

In Haiti, coronavirus and a man named Barbecue test the rule of law

One resident of the Port-au-Prince neighborhood of Martissant, a journalist in his 20s, spoke of fleeing if conditions worsen.

“Anyone who stays in Martissant can be a victim any time,” said the man, who spoke on the condition of anonymity out of fear for his safety. “Anyone who chooses to take the road knows there are three possibilities: Either you die, you’re wounded or you get home safe.”

Joseph, who has been recognized internationally but challenged at home, has asked the United States and the United Nations to send troops to help provide security. Pentagon spokesman John Kirby said Sunday the request was under review.

U.S. officials have pressed Joseph to keep his pledge to hold elections scheduled for September. But many here argue elections are impossible while the gangs rule the streets.

Cherizier and his alliance of gang leaders, called the G9 Family and Allies, say they are engaged in a revolution to liberate Haiti from a corrupt wealthy and political class. Human rights organizations had accused Moïse of maintaining links to Cherizier.

Cherizier said his followers would “practice what we call legitimate violence.”