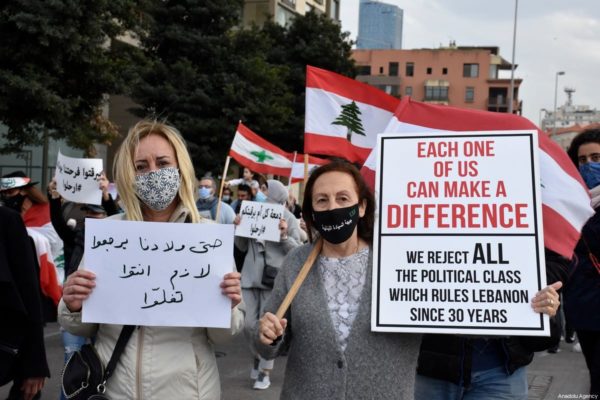 Protests against Parliament for not lifting immunity over suspects in Beirut Port blast . One banner read in order for our kids to return to Lebanon you ( politicians ) should leave
Share:

Lebanese parliamentarians have held up an investigation into the Beirut port blast, less than a month before its first anniversary, demanding more proof before they lift immunity for ex-ministers wanted for questioning.

Hundreds of tons of ammonium nitrate fertilizer exploded on the dockside at Beirut port last August 4, killing more than 200 people, injuring thousands and ravaging swathes of the capital.

Afterwards, it emerged that officials had known about the explosive substance being stored unsafely at the port for years.

Bitar said he was looking at possible charges of “probable intent to murder” and “negligence.”

Deputy Speaker Elie Ferzli said parliament’s administration and justice committee met and decided to “request all evidence available in the investigation, as well as all documents that prove suspicions.”

He said the committee would reconvene once it had received a reply, to decide whether or not to waive immunity.

Lawyer and activist Nizar Saghieh said the committee’s request went against the separation of powers between the judiciary and the legislature, and “violated the confidentiality of the investigation.”

The hashtag #lift_immunity_now began trending in Lebanon as protesters gathered outside the residence of Parliament Speaker Nabih Berri where the committee meeting took place.

“Immunity has to be lifted immediately,” said Ibrahim Hoteit, a representative of families of those killed in the explosion.

The activist, who lost his brother in the disaster, said stalling the decision was “shameful, in view of the size of the crime.”

Protesters then headed to the Interior Ministry following media reports that the caretaker minister had not allowed Bitar to question General Security chief Maj. Gen. Abbas Ibrahim over the blast.

There was no statement from the minister’s office.

Ibrahim said he was “not above the law,” but did not offer to meet with the judge for questioning

The outgoing premier, Hassan Diab, has been charged in the probe and Bitar has called him in for questioning.

The judge has also said he is looking at interrogating former public works minister Youssef Fenianos.

Rights groups including Amnesty International and Human Rights Watch have called for a U.N. investigation into the explosion.