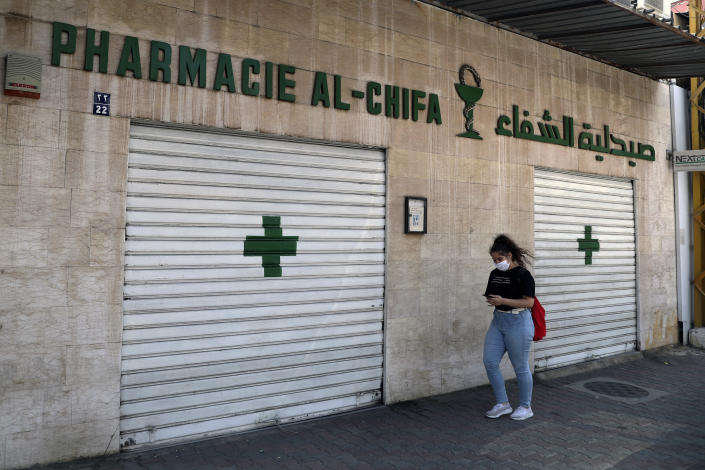 Several pharmacies in Lebanon closed because of shortage of medicine
Share:

Lebanon’s medicine importers Sunday said they had run out of hundreds of essential drugs and warned of more shortages, as the country’s dire financial crisis batters the health sector.

Lebanese are grappling with a raft of shortages, including petrol, as the caretaker government discusses lifting subsidies it can no longer afford amid what the World Bank says is one of the world’s worst financial crises since the 1850s.

The local currency has lost more than 95 percent of its value on the black market, but the central bank had been providing importers with dollars at a much more favourable official rate to cover a large part of the cost of imported drugs.

Medicine “imports have almost completely ground to a halt over the past month”, the association of pharmaceuticals importers said in a statement.

The syndicate said the central bank has not released the promised dollars to pay suppliers abroad, who are owed more than $600 million in accumulated dues since December, and importers cannot obtain new lines of credit.

“Importing companies’ stocks of hundreds of medicines to treat chronic and incurable diseases have run out,” it warned.

“And hundreds more will run out through July if we cannot resume imports as soon as possible.”

If nothing is done, “the situation will be catastrophic by the end of July” depriving “hundreds of thousands of patients” of their medication, he warned.

On Thursday, President Michel Aoun said he had agreed with ministers and the central bank chief to “continue subsidising medication and medical supplies” selected by the health ministry according to priority.

The Lebanese state is providing less than five hours of electricity a day in most areas, as it struggles to come up with the foreign currency for fuel imports.#photo1

For the past months, Lebanese motorists have had to queue for hours outside petrol stations in scorching heat as fuel has become in short supply.

Filling up a car with petrol has increased by 55 percent in the past two weeks, as the government has slashed fuel subsidies.

Asharq Al-Awsat newspaper quoted the head of the private hospital syndicate Sleiman Haroun as saying that hospitals had enough fuel stocks to operate generators for just two days, instead of two weeks.

Firass Abiad, the head of the Rafic Hariri main public hospital battling the Covid pandemic, said the lives of patients were also at risk.

“For most hospitals in Lebanon, the major concern currently is not the (coronavirus) Delta variant, nor shortages in supplies. The major worry now is electricity, without which medical equipments cannot work,” Abiad wrote on Twitter.

“Old generators cannot continue running nonstop. When they breakdown, lives will be at risk.”

The government resigned after a deadly port explosion on August 4 last year, but a deeply divided political class has failed since to agree on a new cabinet to lift the nation out of crisis.