What would the collapse of Lebanon’s army mean? 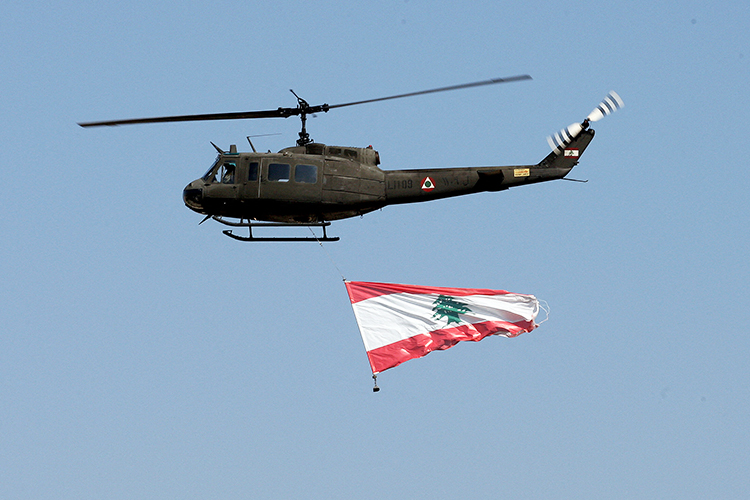 This image has been used for illustrative purpose. The army helicopters are lifting tourists and giving them a joyride in their helicopters.The kind gesture has left tourists absolutely delightful. The fees are meant to help the cash-strapped institution pay its soldiers to make ends meet.
Share:

Lebanon’s army chief Joseph Aoun has warned the armed forces might collapse if not financially supported.

Beirut, Lebanon – A Lebanese air force chopper flies over a blurry landscape of green fields and snow-peaked mountains, promising the tourists a view of the Levantine country from above.

The image posted on the armed forces’ website leaves out the seaside and is a poorly taken shot that fails to capture the sprawling beauty of the tiny country on the Mediterranean Sea. The idea, however, is ingenious and much-needed at such desperate times.

Each ride would cost just $150, but the payment must be made in cash. Dollars are scarce in a country that is fast depleting its reserves since the economic crisis exacerbated in 2019.

The money is meant to help the cash-strapped institution pay its soldiers, one with the civilians in their penury and struggling to make ends meet.

As Lebanon’s currency plummeted, losing over 95 percent of its value last month, the Lebanese armed forces, too, were affected.

The institution roughly employs more than 80,000 men, most of whom earned the equivalent of $800 a month but now take home between $70-$90. That is far from what they need to buy food, pay for commute, educate their children, and for healthcare.

Sami Nader, a Lebanese political analyst, said jungle law would prevail if the forces were not helped immediately.

“With just $2-$3 that they earn a day, the soldiers are unable to cover transportation costs. How are they expected to guard the borders and keep the peace within?” Nader asked. “All the ingredients of civil strife are there. If we don’t have a functioning army it will be total chaos.”

Since the end of a 15-year-long bloody civil war in 1990, the Lebanese armed forces have trodden carefully and effectively between the country’s many sects and kept the peace internally.

They have maintained calm on a volatile border with Israel since the 2006 war between Israel and Hezbollah, an Iran-backed militia that opposes Israel. They have also had to navigate a balance of power with Hezbollah, often seen as a challenger to them.

They guarded Lebanon’s borders against the armed group ISIL (ISIS) as it expanded in neighbouring countries and contained the threat of Jabhat al-Nusra – a former affiliate of al-Qaeda that emerged on the scene in the Syrian conflict.

Moreover, it is the only institution in Lebanon that is respected by the Lebanese people and exerts some sort of moral authority when the political class is deeply despised for its corruption and inefficiency.

A gaping hole in their pockets has caused panic among the highest levels of the hierarchy about how to feed their men and support their families so they can continue to guard the country’s many troubled frontiers.

The armed forces might collapse if not supported, warned the Lebanese army chief Joseph Aoun in a video posted on Twitter. “How can a soldier support a family with a salary that does not exceed $90?” he asked.

“Where are we going? What are you waiting for? What do you plan to do? We have warned more than once of the danger of the situation,” Aoun exhorted the political class to abandon their indifference to the plight of people and come up with a plan.

The ruling elite, however, has paid no heed and continued to squabble over cabinet posts halting the formation of a government needed to negotiate the rescue package with the International Monetary Fund (IMF). Late last month, Aoun rushed to France to rally support from the international community and save the armed forces.

“The Lebanese army chief apprised us of the problem and we are very worried about the possible disintegration of Lebanon’s army,” a French diplomatic source told Al Jazeera.

“France has started to help with food rations, medicines, and basic equipment but a lot more is needed. We tried to mobilise international partners in the conference.”

More than 20 countries participated in the conference in Paris in mid-June but they did not reveal details of how exactly they intended to support the Lebanese armed forces.

The international community fears if the armed forces were to disintegrate, local sectarian militias would rise in a country ripe to catapult into complete chaos.

Lebanon has been an oasis of stability in the region grappling with myriad conflicts and the last outpost of the refugees from war-torn countries fleeing to Europe.

The survival of the Lebanese army is essential to avoid another wave of migration to Europe and a bulwark in any future confrontation between Hezbollah and Israel.

Elias Farhat, a retired Lebanese general, said the army needs cash support and not just aid. “Paris didn’t mention cash money, they don’t allow cash to be given in foreign aid and only help with materials – ammunition, etc,” said the general.

Otherwise, he warned, most soldiers might leave the forces. “Many are thinking about finding another job to find a living. Others want to leave the country.”

At the start of the year, the numbers witnessed a steep fall, at least 3,000 less than previously reported.

The United States has offered an additional $15m in aid to Lebanon’s military for 2021 following a conference in May between chief Aoun and senior State Department and defence officials. But it is still a trickle of the billions the US hands out to Israel yearly.

Lebanon’s armed forces have sent an SOS to world powers – “Help us before it’s too late.”