Egypt, Iraq, and Jordan: A new partnership 30 years in the making? 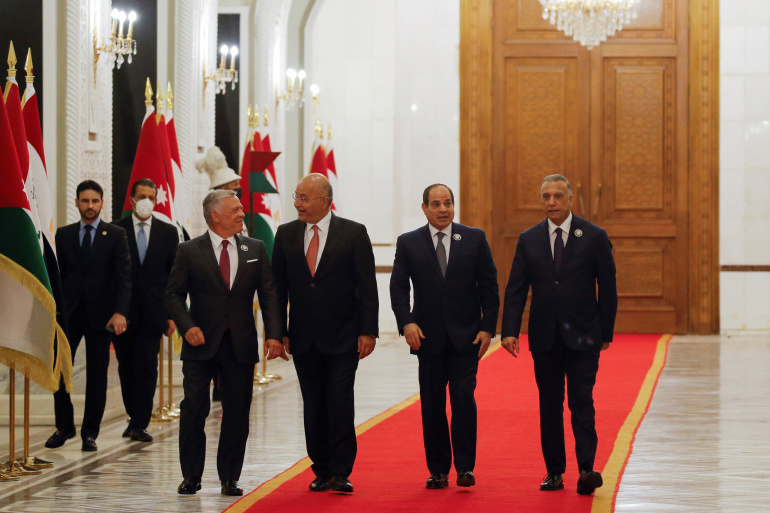 In April, the news that Iraq was mediating between longtime rivals Saudi Arabia and Iran captivated Middle East watchers. Iraq’s new role as a Saudi-Iran intermediary comes as the Saudis have taken concrete steps in recent years to build a meaningful relationship with their northern neighbor, such as reopening their border last November for the first time since 1990. Yet while the new Saudi-Iraq relationship is indeed noteworthy, Iraq has simultaneously been forging a regional partnership with two other Arab states: Egypt and Jordan. Indeed, Baghdad hosted a summit in late June attended by Egyptian President Abdel-Fattah el-Sissi and King Abdullah II of Jordan. It was the fourth time leaders of the three countries have met together since March 2019, and the first time on Iraqi soil. It was also the first visit by an Egyptian president to Iraq in more than 30 years.

At first glance, a partnership grouping together Egypt, Iraq, and Jordan appears rather strange. One commentator, not without reason, called it an alliance composed of the “region’s odd fellows.” However, Iraq has historically had important economic relationships with both Egypt and Jordan, and in fact the three countries — along with North Yemen — came together in a very short-lived partnership called the Arab Cooperation Council (ACC) from 1989 to 1990. Today, like 30 years ago, economic cooperation lies at the heart of the trilateral relationship. But then and now it has also had strategic goals. And in the longer term, the new partnership potentially heralds a far more ambitious project to bring together not just Egypt, Iraq, and Jordan, but the countries of the Levant more broadly.

BACK TO THE FUTURE

Iraq’s close economic ties to Egypt and Jordan date to the 1980s, during the Iran-Iraq War. Jordan became Iraq’s economic lifeline at that time, serving as a conduit for imports and oil exports through the port of Aqaba. Jordan also received most of its own oil, highly subsidized, from Iraq. King Hussein was Iraqi dictator Saddam Hussein’s closest ally at the time, visiting Baghdad often during the war. Egypt, meanwhile, saw more than one million of its citizens relocate to Iraq during the 1980s to fill jobs made vacant by the mass conscription of Iraqi men into the armed forces — so many that Iraq constituted Egypt’s largest source of remittances.

Soon after the end of the war, the three countries, joined by North Yemen, formed the ACC. Each had a political motive to forge the pact. All wanted allies to balance against the Gulf Cooperation Council, the Saudi-led alliance of the six Gulf monarchies created during the war. Saddam owed the Saudis billions of dollars in loans from the war, while Amman and Sana’a had longstanding concerns about Saudi expansionism and interference in their internal affairs.

Nevertheless, economic cooperation formed a central pillar of the formation. The ACC was envisioned as a mechanism to increase trade among member states, as well as to facilitate labor movements, particularly from Egypt and Jordan to Iraq.

The ACC had barely launched before it fell apart due to Saddam’s invasion of Kuwait in August 1990. But even during the 1990s, while Iraq faced an onerous international sanctions regime, trade between it and Egypt and Jordan continued. Iraq continued to be Egypt’s second biggest export market, under the U.N. Oil-for-Food Programme. Jordan remained dependent on Iraqi oil, which it continued to receive with U.S. acceptance. King Hussein only very reluctantly broke with his long-time friend, Saddam, when Washington agreed to welcome Jordan back as a close ally.

Not surprisingly, therefore, Egypt and Jordan were among the first Arab states to build ties to the new Iraq following the 2003 U.S. invasion. In 2005, then-Jordanian Prime Minister Adnan Badran became the most senior Arab official to visit Iraq since the invasion; three years later Abdullah was the first Arab head of state to visit. Egypt and Iraq reestablished trade ties in 2004. The following year Cairo sent an ambassador to Baghdad, although tragically the Egyptian diplomat was assassinated by al-Qaida in Iraq a few weeks after his arrival. The Jordanian embassy in Baghdad was also among the first targets of al-Qaida in Iraq.

The development of Iraq’s economic relationships with Egypt and Jordan was significantly hindered by its sectarian civil war of the 2000s and the rise of the Islamic State group in the 2010s. But in recent years, the three countries have again taken meaningful steps to rebuild economic ties. In 2017, Egypt began to receive oil from Iraq, after its oil supply was cut off by Saudi Arabia. Jordan began to take delivery of Iraqi oil in 2019. Since at least 2017, the three countries have anticipated undertaking a major joint energy project, linking Iraq’s oilfields in Basra to Aqaba via pipeline, which could be further extended to Egypt. Meanwhile, Iraq has also looked to Egyptian and Jordanian companies for the massive reconstruction projects it will need to undertake to recover from four decades of wars. There are also plans to connect Iraq to Jordan and Egypt’s electricity grids to reduce its dependence on electricity exported from Iran.

Nevertheless, all three countries are cash-strapped — a major challenge for their ambitions. At the end of last year, Egypt and Iraq agreed, in effect, to trade Iraqi oil for Egyptian reconstruction assistance. In the longer run, the three countries will need to look to outside parties for financing.

While Iraq is heading to elections this fall, most of its leaders appear enthusiastic about the partnership’s economic promise. Discussions for the project were already underway during the premiership of Haider al-Abadi. Subsequently, Adel Abdul-Mahdi, on his first trip abroad as prime minister in March 2019, attended the first trilateral summit in Cairo. President Barham Salih met with el-Sissi and Abdullah in New York, on the sidelines of the U.N. General Assembly, in September 2019. Current Prime Minister Mustafa al-Kadhimi headlined Iraqi attendance at the third summit in Amman in August 2020.

Economic cooperation is the driving force behind the formation, but as in 1989, each of the three has a political incentive to come together. Iraq wants to diversify its regional relationships beyond Iran — though it is important to emphasize that Baghdad does not aim to develop its relations with its Arab neighbors at the expense of its relationship with Tehran. Iraq wants friendly relations with both. The Iranians, for their part, might actually look favorably on Iraqi economic cooperation with Egypt and Jordan – if, down the line, they will also be able to benefit economically. By contrast, if Egypt and Jordan, and for that matter the United States, seek to use the formation as a means to isolate Iran, Tehran will undoubtedly sow problems. The extent to which Iran may be allowed to benefit will ultimately depend on the outcome of its ongoing negotiations with the Biden administration.

Egypt and Jordan, meanwhile, want to reduce their dependence on Saudi Arabia. For Jordan, this is particularly critical following reports of Saudi involvement in a recent conspiracy to destabilize the country and replace King Abdullah with former Crown Prince Hamza. The new formation would give Jordan, as well as Egypt and Iraq, greater leverage vis-à-vis Saudi Arabia and the other Gulf countries.

But the most significant, if still implicit, political objective may be to provide a means in the longer term to rehabilitate Syria. Leaders from the three countries have begun to call their formation “the new Levant,” or “al-Sham al-Jadid” in Arabic. Sham is a reference to the city of Damascus, and more broadly to Syria and the Levant. By definition, there cannot be a new “Sham” without Syria. Perhaps unsurprisingly, Egypt, Iraq, and Jordan have let it be known that partnership in their new bloc will be open to other countries in the region, without specifying which. In fact, this aspect of the new formation also has roots in the short-lived ACC experiment. ACC member states did not view their partnership as exclusive, and there was some anticipation that Syria and Lebanon might have joined at some point.

The Egypt-Iraq-Jordan formation is in many ways the resurrection of the old ACC, which was disrupted for 30 years by instability and war in Iraq. The U.S. has welcomed and should continue to support this growing partnership of three of its close partners in the region. In the longer run, if Syria and Lebanon are invited to join, U.S. support would be complicated by the continuation in power of Bashar al-Assad, rightfully seen as a war criminal. Nevertheless, the “new Levant” project could ultimately serve as a means to undertake the massive reconstruction needed in Syria and to reduce the considerable economic misery of the people there and in Lebanon.

After a decade of war in Syria, and four decades of war in Iraq, there has never been greater need for a new vision for the region. The nucleus of a new beginning might just lie in an economic partnership first launched more than 30 years ago.