‘This is the end of times’: Lebanon struggles to find political path through its crisis 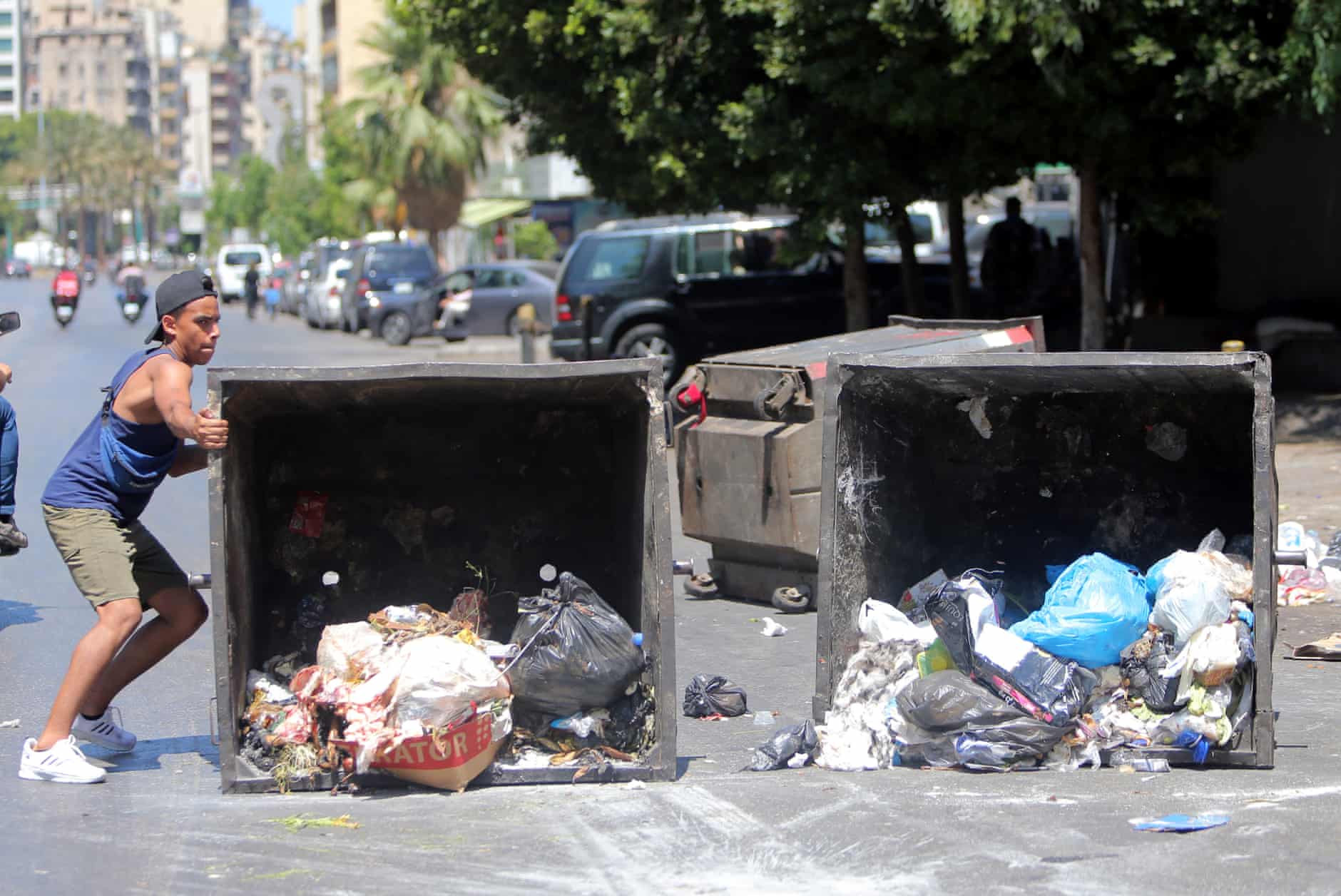 Demonstrators use garbage containers to block a main road in Beirut during a protest against the increase in prices of consumer goods and the crash of the local currency. Photograph: APAImages/Rex/Shutterstock
Share:

As the country suffers from hyperinflation and shortages of fuel and medical supplies, pressure is growing at home and abroad to address its governance quagmire

The lights dimmed further in Lebanon last month when two giant barges that had boosted its electricity grid were switched off. The result was six hours less power a day for most homes, or more need for generator fuel for those who could afford it.

However, fuel is also in short supply in the crisis-hit nation. Giant queues clog roads near filling stations and top-ups are limited to 20 litres, making most journeys precarious.

Over the weekend, troops deployed in the northern city of Tripoli, surrounding key state institutions after a night of protests and riots against worsening living conditions left several protesters and 10 soldiers injured. Drugs and medical supplies are scarce too, with many acute diseases going untreated.

According to many Lebanese, those now include the rot at the heart of the state, which 18 months after the first signs of economic crisis remains as potent as ever. As Lebanon disintegrates, diplomats, aid chiefs, global officials and even some local leaders are pondering the very viability of a state that refuses to reform even to save itself.

Almost 11 months after last August’s catastrophic explosion at Beirut’s port, there have been no breakthroughs in attempts to form a government – even as hyperinflation and a broken banking system destroy savings, food insecurity soars and a brain drain quickens.

“The explosion … has accelerated a lot of things, that’s for sure,” said Najat Rochdi, UN resident and humanitarian coordinator for Lebanon. “The crisis in the economy, the currency devaluation, as well as the governance vacuum, has meant a breakdown of public services at a time when they are most needed.”

Across Lebanon, extreme poverty has risen threefold since the first signs almost two years ago that the economy was approaching a precipice. For many households, basic services including health, electricity, water, internet and education are almost out of reach, but this has made little impact on politicians intent on protecting a patronage system run along the sectarian lines that has undermined competent governance for decades.

The country’s politicians remain incapable of compromising on cabinet portfolios and quotas, and their intransigence serves as a reality check to hopes that ministries could in the future be run as institutions instead of fiefdoms.

But where global bodies and international governments had been more or less willing to support Lebanon during past – far less severe – crises, the catastrophe this time is seen as largely avoidable – more a governance issue than a humanitarian one.

Such bluntness has been difficult to digest for civil war leaders and their loyalists who still hold sway over the country’s affairs. France, a long-term benefactor of Lebanon, has repeatedly told senior officials that aid will only start flowing after reforms, such as transparency and a central bank audit, are introduced.

“They still think a bailout is coming,” said one Lebanese acting minister. “Because they see the global community as secular humanists who won’t let us drown. What if they’re wrong? We all go down with the ship, and the villains get a life raft to France?”

Even that seems increasingly unlikely. As the Lebanese pound hits record levels of 18,000 to the dollar – it was 1,500 to the dollar 18 months ago – and reserves kept in the country’s central bank fall to near-critical levels, there is more readiness both in Lebanon and abroad to examine the system that paved a way for such a mess.

Extra attention has been paid to the schemes that lined the pockets of the political class and a range of other untouchables, including some security chiefs. Among the biggest sources of corruption have been Lebanon’s essential contracts – covering fuel importation, electricity generation, telecommunications, biometrics and passports.

“Lately, it has become the sale of subsidised goods [by the central bank] to Syria, especially fuel and medicines,” the minister said. “It’s all taking place in plain sight.”

One European diplomat described the fuel crisis as a scam. “There is no fuel shortage. It is being kept on ships by local suppliers as a way to increase margins and it is being smuggled to Syria where it is sold at much  higher prices than they could reach on the local markets. The mark-ups are being pocketed by all manner of players.”