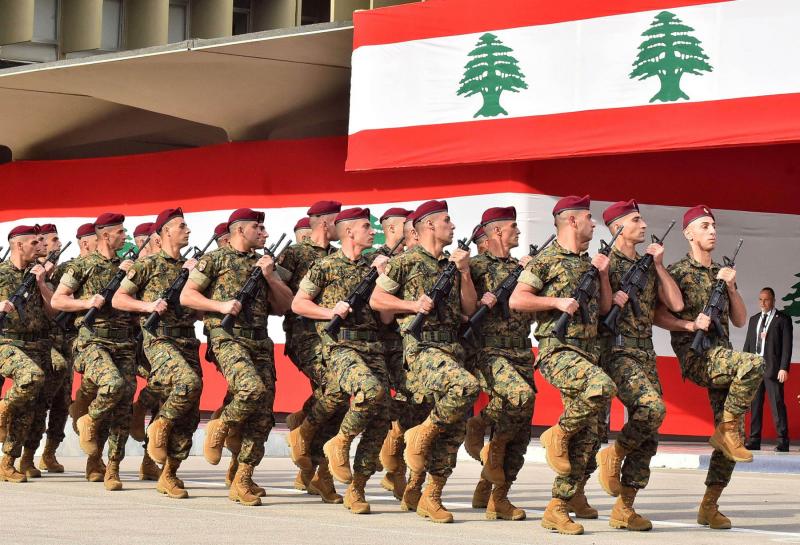 A file photo shows Lebanese army soldiers marching during a military parade commemorating the 76th anniversary of Lebanese independence from France at the Defence Ministry headquarters in Yarze. (AFP)
Share:

PARIS – International donors pledged tens of millions of dollars’ worth of emergency aid Thursday to help prop up Lebanon’s struggling army, a key institution for the country’s stability that is lacking basics, including food. From Paris, Lisa Bryant has more for VOA on the meeting, hosted by France and Italy.

Donations were made during a virtual meeting that France and Italy hosted. A French government statement, issued after the talks, said the support for Lebanon’s army would be  aimed at meeting human and basic maintenance needs and was no substitute for essential reforms the country needs.

An army spokeswoman told VOA the aid would go toward such things as food, fuel and medical supplies and would be released within weeks or months.

Since 2019, the Lebanese pound has lost 90 percent of its value against the U.S. dollar. Added to that, the government plans to cut subsidies on key goods like fuel and food.

“Essentially,” he added, “the soldiers are going hungry. And the budget that the army has to buy anything — to buy spare parts, to buy anything they need for their daily affairs — those budgets have become completely meaningless.”

For Lebanon, and the donor community, the funding would prop up one of the few institutions remaining above the country’s deep divisions. Army chief Joseph Aoun, who visited Paris recently, said the military was forced to turn to allies to survive.

“Even if numerous countries have already provided significant bilateral aid, the gravity of the Lebanese crisis calls for increased commitment and coordination from everyone,” to help the Lebanese Armed Forces (LAF), the French ministry said in a statement.

“The LAF remain an essential pillar of the Lebanese state” and “play a key role in maintaining security throughout the country,” the statement added.

“Their cohesion and their professionalism remain essential to preserve stability.”

The statement added that the assistance, which was not detailed, “cannot replace indispensable reforms that Lebanon today imperatively needs for its stability.”

University of Geneva international relations professor Hasni Abidi said that for the international community, the implications of letting Lebanon’s army collapse were too big. A failed army means a failed state, a population in deep trouble and victory for Iran-backed Hezbollah, the military group dominating Lebanon’s power structure. The army also secures Lebanon’s border with Israel.

Lebanon’s economy began collapsing in 2019, after years of political corruption and mismanagement. French President Emmanuel Macron has visited the country several times and has led international aid efforts, including this one. But he has also sharply criticized its political leaders for failing to carry out key reforms.

The problem with Thursday’s meeting, analysts said, was that it offered only a stopgap solution.

“But the alternative is to say, ‘OK, fine, let it all collapse and crash and let it burn’ … to finally force these [political] players to face the music,” said the International Crisis Group’s Wimmen. “That is of course a big gamble. We have seen in the region what state collapse can mean.”

Once split along sectarian lines during Lebanon’s 15-year civil war, the army recovered to become a unifying force that is one of the most professional in the Middle East.

The army’s biggest foreign backer, the United States, has promised to increase its support this year.