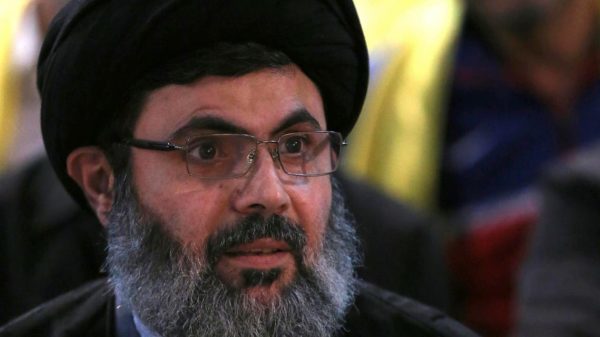 Hashem Safieddine, cousin of Hassan Nasrallah may replace as Hezbollah chief. In October 2008, he was elected to succeed Nasrallah as secretary general of Hezbollah
Share:

According to Wikipedia, Hashem Safieddine, born in 1964, is the head of the Executive Council of Hezbollah in Lebanon, one of the prominent leaders of the party, and the maternal cousin of the party’s Secretary General, Hassan Nasrallah.

By virtue of his position as head of the Executive Council of Hezbollah, he supervises the social and economic activities of the party, and among those activities is his supervision of the reconstruction of the southern suburb of Beirut, which was subjected to great destruction during the July 2006 war with Israel , and is considered the second man in the party, according to observers.

Zainab Mughniyeh, the daughter of slain Hezbollah military commander Imad Mughniyeh, announced the marriage of Zainab Soleimani and Reda Safieddine . Mughniyeh was killed in a car bomb explosion in Damascus in February 2008.

Zainab Mughniyeh published on her Instagram account last Saturday a picture in which the name of Zainab Soleimani appears alongside the name of Reda Safieddine, against a background full of candles.

The timing of the marriage raised the eyebrows of many Iranians, which came about 6 months after the killing of Qassem Soleimani in a lightning US operation in Baghdad, where Iranian families usually avoid marriages before the first anniversary of the death of a family member.

In his last statements, Hashem Safieddine saluted the Palestinian people and their fighters, and said that the resistance in Palestine is much more than what the “enemy” can imagine .

He added that all of Palestine today is Jerusalem, and Jerusalem today shines with the martyrs of Palestine, pointing out that the resistance in Palestine is very large in terms of military capabilities and more than what the Israelis can imagine.

He pointed out that “targeting Ben Gurion Airport is a qualitative targeting, and it is one of the blessings of defending Jerusalem, and all of this does not happen without sacrifices,” noting that “what is happening today in Palestine is the motive that will make all parties join the axis of resistance.”

At the conclusion of his speech, Safieddine confirmed that “the Quds Force today is making great achievements and at the level of vision, it appears that these are the results of what Hajj Qassem Soleimani did.”

An Israeli website revealed the possible successor to the Secretary-General of the Lebanese “Hezbollah”, Hassan Nasrallah, in light of recent rumors that he was infected with the Corona virus, which were later denied by party officials.

On Friday, the Walla website stated: “The rumors and news that flooded social networks (about Nasrallah’s deteriorating health), including WhatsApp, on Monday/Tuesday night, caused great joy in Israel.”

In a report prepared by Arab affairs analyst, Avi Issacharoff, he stated that “it can be said with relative certainty that the man who will inherit Nasrallah will be none other than his cousin, Hashem Safi al-Din.”

Safieddine was designated as a terrorist by the US and Saudi Arabia in 2017.

He studied theology in Najaf, Iraq, and in Qum, Iran, together with Nasrallah until he was recalled to Lebanon by Hassan Nasrallah in 1994.

In October 2008, he was elected to succeed Nasrallah as secretary general of Hezbollah

His appointment as heir apparent to Nasrallah was supported by the Iranians.