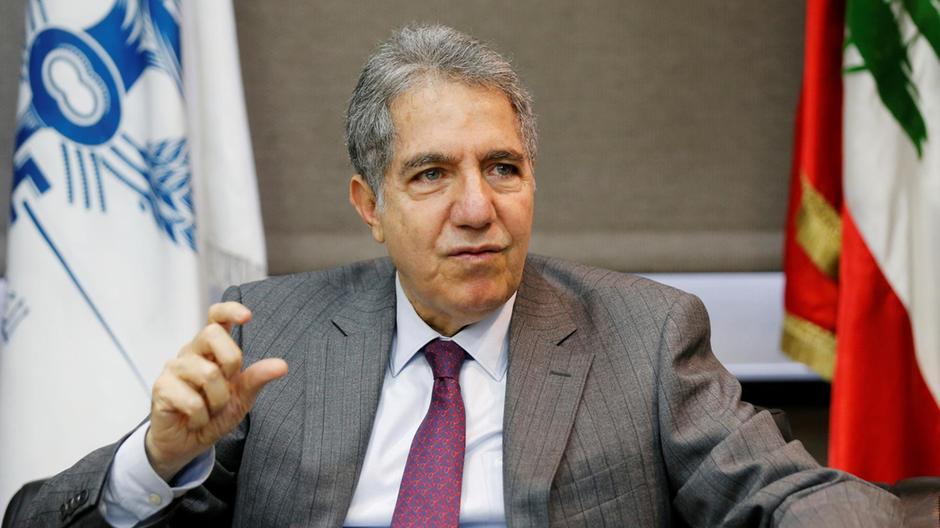 Lebanon’s Finance Minister Ghazi Wazni faces a situation where foreign aid is being distributed directly to recipients in cash Dollars because of corruption concerns. Reuters
Share:

Lebanon’s numerous exchange rates are forcing international donors to use cash dollars instead of the local currency in an effort to support the country’s poor amid a severe economic crisis, sources told The National.

The World Bank and Lebanon’s Finance Ministry agreed this week that a $246 million loan to supportLebanon’s poorest families would not be disbursed in Lebanese pounds, as initially announced in January, but in US dollars.

The announcement came a week after the Lebanese army, which is increasingly dependent on international donations to feed its soldiers, asked Iraq to send a $2 million donation in cash instead of going through Lebanese banks. A plane laden with banknotes landed in Beirut on May 17.

The request was confirmed by a Lebanese army source and an Iraqi Defence Ministry official.

“There will be more financial aid, but details have not been agreed on yet,” the Iraqi official said.

The army source said that the money would be spent on food and medicine for its 80,000 soldiers.

Neither side gave an official explanation for the army’s request, but analysts were not surprised.

“We have been moving to a cash economy for the last 18 months as the banking system remains insolvent. The currency crisis and multiple exchange rate system makes it challenging to do business in Lebanese pounds.”

Several exchange rates have co-existed in Lebanon since November 2019, when Lebanese banks severely restricted access to foreign currencies and banned transfers abroad, plunging the small Mediterranean country into its worst economic crisis yet.

The official peg of 1,507.5 Lebanese pounds to the dollar, in place since 1997, remains artificially in place.

But the market rate, which fluctuates daily, has reached nearly 13,000 Lebanese pounds to the greenback, causing inflation to rocket as importers buy products in cash, using dollars.

Shops, restaurants and hotels are increasingly adjusting their prices in Lebanese pounds to the market rate.

Day-to-day living is a challenge for the impoverished Lebanese, whose salaries have not followed the steep inflation curve.

Meanwhile, banks allow depositors to withdraw their dollars stuck in banks at the rate of 3,900 Lebanese pounds to the dollar.

Lebanon’s central bank chief Riad Salameh has repeatedly said that depositors’ money was safe and promised on Monday that small depositors would be able to access some of their dollars at the end of June.

But his claims have done little to boost confidence in Lebanese banks. In a report released on Monday, S&P Global said that bailing in depositors, for example, by paying them below-market exchange rates, or converting deposits into equity, seems likely.

The World Bank struck a deal last year with Lebanese authorities to disburse its $246 million loan at the rate of 6,240 Lebanese pounds to the dollar. At the time, this rate was close to the market rate, which has since plummeted.

But the decision came under fire from civil society. They accused the World Bank of enriching the central bank. “The deal wasn’t balanced any more,” said a diplomat who closely followed the negotiations.

The source told The National that donors will continue disbursing aid in cash dollars, or in Lebanese pounds at the market rate – which is technically illegal but largely tolerated by local authorities – until the exchange rates are unified.

“The dollarisation of aid is an extreme and temporary solution that has only ever been implemented in countries like Zimbabwe in the past,” they said.

“The fundamental driver is to give aid that is fair to the people,” the diplomat said.

“It’s not the rule, it’s not recommended, it’s done on an emergency basis and should not be done for ever,” said Jamal Saghir, distinguished fellow at the Institute of Financial Economics at the American University of Beirut.

“But keep in mind that what is happening to Lebanon is also rare. Lebanon’s economy is now in a situation of sudden stop. It is facing multiple exchange rates and deep accumulation of interrelated political, social, economic, financial, and environmental crises, with no action from the government. So the international community is doing substitution work,” he said.

The World Bank told The National in an email that beneficiaries of its social safety net programme, which will target 147,000 extremely poor Lebanese households, will receive prepaid cards. They can use them to pay for products in shops or withdraw cash dollars from ATMs.

Most ATMs do not dispense foreign currencies any more, but there are exceptions for so-called “fresh dollar” accounts, which allow depositors to withdraw dollars sent from abroad under certain conditions.

Unlike Iraq’s direct cash donation to the Lebanese army, the World Bank loan is expected to be deposited at the central bank and then transferred to an account managed by the World Food Programme.

The World Bank said that the Lebanese government must meet “effectiveness and disbursement conditions” before the programme, which also aims to support education costs and social services, can begin.

Caretaker prime minister Hassan Diab suggested a cash assistance plan that would cost close to $1 billion. The plan was signed off by President Michel Aoun on Wednesday and must now be approved by parliament, but it seems unlikely this will happen soon.

Local MPs criticised it after Mr Diab told the media that Lebanon would have to dip into the central bank’s mandatory foreign currency reserves to finance it.

The Lebanese government has been paralysed since a deadly explosion at the port in Beirut last August that forced Mr Diab to step down. Politicians, who are widely perceived as corrupt, have been bickering over how to allocate ministerial posts in the new Cabinet.

“What is fundamental is transparency. If it’s not transparent there is room for corruption,” said Mr Saghir, a former director at the World Bank.

“From my experience, going through the World Bank is much better than a government cash transfer system. The World Bank will establish a strict framework, do follow-up and close supervision,” he said.

The World Bank told The National that anti-corruption and transparency measures will include “rigorous targeting and verification” of all beneficiaries and the “recruitment of an independent third party monitoring agent” to verify their eligibility.