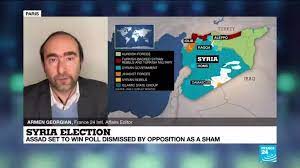 Syrians are voting in presidential elections widely dismissed by experts and activists as a sham poll, rigged in favor Bashar al-Assad.
Share:

Syrians voted in presidential elections widely dismissed by experts and activists as a sham poll, rigged in favor of President Bashar al-Assad. Assad, 55, who has repeatedly been accused of war crimes and crimes against humanity, is expected to win an election for the second time since an uprising in 2011 spiraled into civil war.

In 2014, Assad received 88.7% of the vote in an election that took place in government-controlled parts of the country. At the time, opposition groups ran large swathes of Syria — Assad’s forces have since wrested control over most of that territory.

Turkey controls some territory in the northwest of the country and the US military has a presence in the country’s northeast. Hundreds of thousands of people have died in Syria’s war, and millions have been displaced. Assad is accused of launching at least three major chemical attacks on civilians in opposition-controlled areas since 2013. Syria’s government denies allegations of war crimes and of having used chemical weapons. It also dismisses criticism of its election process.