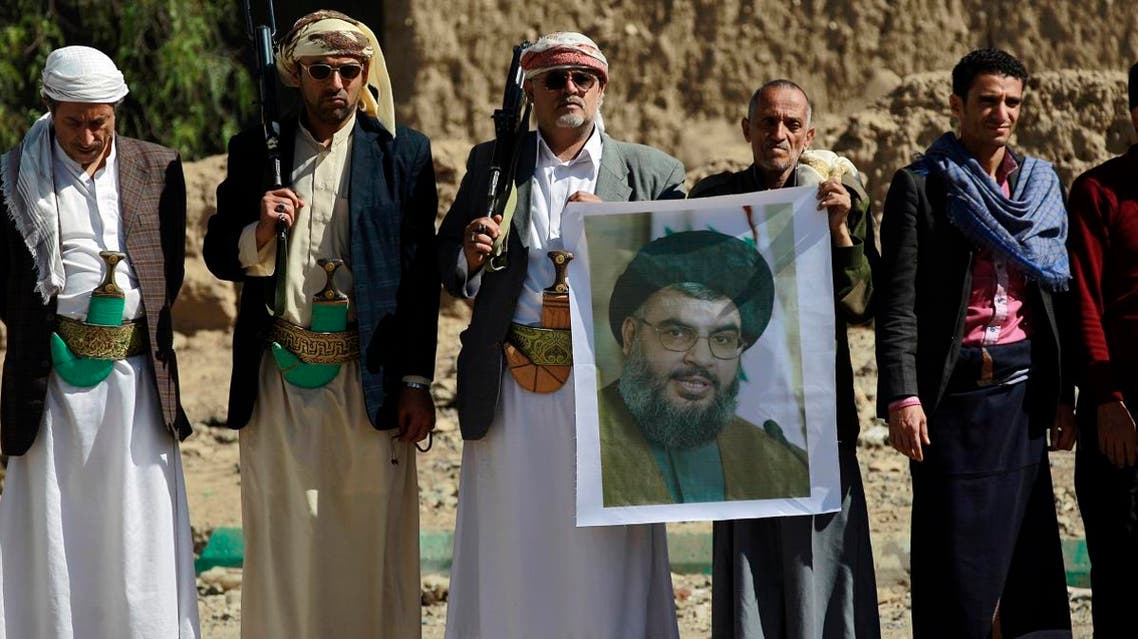 File photo: Houthi militiamen hold posters depicting Lebanon’s Hezbollah chief Hassan Nasrallah during a gathering in the capital Sanaa . A Hezbollah missile expert who was helping the Iranian backed Houthi rebels was reportedly killed by the legitimate Yemeni government forces and the coalition in the raids battles in the Marib province
Share:

The legitimate Yemeni government confirmed on Tuesday reports of the killing of a Lebanese Hezbollah commander, fighting for the Iran-backed Houthi militias, in the ongoing battles in the Marib province.

Mustafa al-Ghrawi was killed in a Saudi-led Arab coalition air strike on Houthi positions on the Sirwah front in Marib.

He slammed the party’s meddling in Yemen, saying it reflects the extent of Iran’s involvement in the Houthi military escalation on all fronts in Marib.

This Iranian involvement is evident through its deployment of hundreds of Revolutionary Guards and Hezbollah experts and operations commanders, he added.

He also cited Tehran’s smuggling of weapons, such as ballistic missiles and drones, to the Houthis and its dedication of a political and media campaign to promote its battle.

All of these actions are an extension of Iran’s expansionist agenda in the region, warned Eryani.

He called on the international community, United Nations and permanent members of the Security Council to take “firm stances against the flagrant Iranian meddling in Yemeni affairs and put an end to Tehran’s role in escalating the military operations and undermining peace efforts.”