Why Lebanon is headed for more fragility 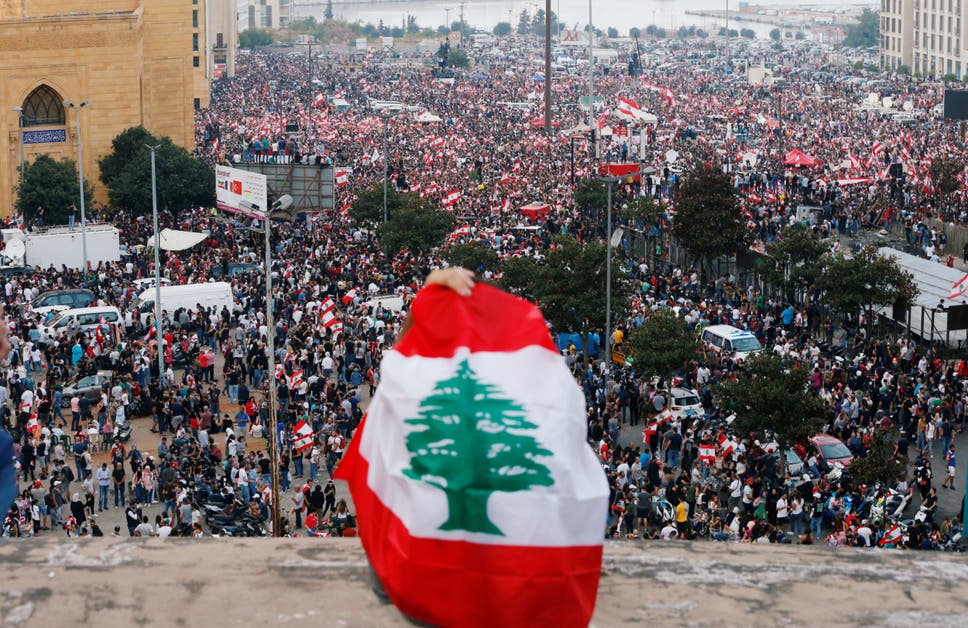 File photo off An anti-government protest in downtown Beirut all of them means al of them ( Reuters )
Share:

The Middle East is a region where one can never say that things cannot get worse, simply because they always can and will.

As the region was already overloaded with dangerous geopolitical files and disastrous humanitarian conditions, things indeed got worse and the international community’s attention has now shifted again and focused mainly on the terrible situation in Gaza.

This spells bad news for Lebanon, as countries involved and trying to help will no longer have the capacity to engage to find a political solution that is the key to unlocking the desperately needed international financial support.

As the situation between the Israelis and Palestinians evolves, efforts and support will be shifted to this more urgent and dire situation.

In fact, and unfortunately, international efforts on Lebanon led by France have already failed. They have been unable to bring the lowest level of concessions from Hezbollah. This was clearly voiced on its behalf by the entire political leadership of the country.

The initial objective of a complete transformation of the political landscape initiated by the calls of protesters as early as October 2019, slowly but surely trickled down to trying to convince these actors to form a government to unlock the International Monetary Fund’s financial support.

Even as the country and people are starving, this failed, and France has been dragged into meaningless and sterile negotiations between political leaders that have no intention of finding a solution.

If the devil is in the details, then Lebanon’s politicians have mastered the craft of the devil by pushing forward useless details and creating confessional and minority conditions to any government formation in the unique objective of drowning any foreign support.

Not only this, but Hezbollah keeps everyone guessing by shifting positions on the IMF bailout which is still far away. At the end, they only understand hard power.

Unfortunately for the Lebanese people, Hezbollah has been successful at keeping the status quo and there is little chance of a breakthrough.

People are left running around trying to get their daily necessities: Medicine, milk, diesel, currency, and security. They are not even able to protest or try to think about building a better future; they are now busy trying to survive. They have lost all their savings to a wicked banking system and are now losing their dignity and safety.

The immediate and clear outcome of the current path will be the complete disintegration of the state and its authority. As state financial resources dry up, pensioners will no longer receive their benefits and soldiers as well as all government employees will no longer receive their pay. What happens to an army when its soldiers are left to starve? What happens when police officers can no longer feed their children?

In Haiti, as an example, where the executive power is in deliquescence, armed gangs have taken control. The main leaders of these gangs are former disgruntled police officers or military personnel. The country lives under the rule of kidnappings, killings, and pure violence. One can now legitimately ask if the same will happen in Lebanon.

Another expected outcome is that government services from healthcare to social support will completely cease.

Most recently, another worrying development is the state-owned Electricite du Liban facing a strain to limit outages. This comes as suppliers are threatening to halt their services due to unpaid bills dating back more than 18 months. And to make things worse, all these contracts, similar to most public entities, are surrounded by corruption allegations and bribe payments.

Yet unfortunately there is no justice in a country like Lebanon. Even with the best and most willing judges, they would face death before the truly criminal and guilty face a sentence.

When investigating other countries that went through similar collapses, one can already forecast and understand by looking at what is happening in Lebanon today, where the country is headed.

Let us forget the political landscape for a moment and just focus on the people’s food intake. In Venezuela, a university study — conducted in 2017 on the impact of the devastating economic crisis and food shortages — reported that Venezuelans lost on average 11 kg. This also translates to higher child mortality rates and a complete degradation of the citizens’ health.

As scenes of people fighting in supermarkets for subsidized basic products are becoming more common, we are already witnessing this plus the rise of illegal markets.

Basically, the state will become even more fragile. It is expected that Hezbollah will keep its grasp on the country as it is an environment it understands and controls. They will certainly benefit from their Syrian experience and through their international networks will be able to control a bigger chunk of the basic needs’ economy: Food, medicine, fuel, and security.

If it can manage this for its community and its allies, Hezbollah will not have the capacity to take over the entire state and control the entire situation. This means that it will accommodate itself with other armed gangs.

Hezbollah and Lebanese politicians will not yield and would rather see the country disintegrate than risk accountability. They do not want a solution; they want to maintain control of what they can.

The racist declarations of Charbel Wehbe toward Saudi Arabia symbolizes perfectly — if still needed — Hezbollah’s and its politicians’ state of mind. It is the defiance of the wicked, the arrogance of the corrupt, the pride of the thief; they do not deserve saving.

But even in a positive scenario, where a government is formed and IMF support is unlocked, how long will it last? It will only take a few months or a year before more is needed by these political gangs and we will be back in the same situation but with more debt piled up.

There is hence an important question that the international community and France should be asking: Should they stop efforts for a political solution and shift toward gathering momentum for the humanitarian aid the country and its citizens will soon need?

This is a difficult one, especially if this aid needs to be delivered bypassing the current political gangs whose greed and ruthlessness could make it a bargaining tool against the population. Regardless, a solution for the people must be reached urgently.