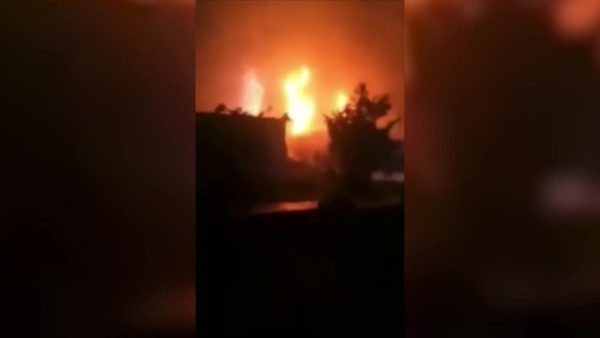 82 killed in Iraq as fire erupts at COVID-19 hospital . Iraqi PM suspended the health minister and referred him for investigation in response to the deadly
Share:

Iraqi PM suspends health minister and refers him for investigation in response to deadly fire at a Baghdad hospital.

At least 82 people were killed and more than 100 injured in a fire that broke out in the coronavirus intensive care unit of a Baghdad hospital, sparking anger and prompting the suspension of top officials in a country with a long-dilapidated health infrastructure.

The blaze on Saturday night at the Ibn al-Khatib Hospital in the Iraqi capital was sparked by an accident that caused an oxygen tank to explode, according to medical sources.

The health ministry announced on Sunday that 82 people were killed and 110 were injured in the blaze, while the Iraqi Human Rights Commission said 28 of the victims were patients who had to be taken off ventilators to escape the flames.

The flames spread quickly, according to civil defence officials, as “the hospital had no fire protection system and false ceilings allowed the flames to spread to highly flammable products”.

In response to the fire, Prime Minister Mustafa al-Kadhemi suspended Health Minister Hassan al-Tamimi amid angry calls on social media for him to be sacked, as part of a probe that would also include the governor of Baghdad.

The prime minister also declared three days of national mourning, while parliament said it would devote its Monday session to the tragedy.

Patients’ relatives scrambled during the blaze to save their loved ones.

Ahmed Zaki, who was visiting his brother when the fire broke out, described people jumping out of windows as the fire spread quickly throughout the unit equipped to treat COVID-19 patients.

“In the beginning there was an explosion,” he said. “People were jumping … Doctors fell on the cars. Everyone was jumping.”

Al-Kadhimi earlier on Sunday fired the director-general of the Baghdad Health Department in the al-Rusafa area, where the hospital is located. He also sacked the director of Ibh al-Khatib Hospital and its director of engineering and maintenance, according to a statement from the health ministry and his office.

After the fire first broke out, al-Khadhimi held an emergency meeting at the headquarters of the Baghdad Operations Command, which coordinates Iraqi security forces, according to a statement on his Twitter account.

In the meeting he said the incident amounted to negligence.

“Negligence in such matters is not a mistake, but a crime for which all negligent parties must bear responsibility,” he said. He gave Iraqi authorities 24 hours to present the results of an investigation.

Iraq’s healthcare system, already ruined by decades of sanctions, war and neglect, has been stretched even further by the coronavirus crisis.

Al Jazeera’s Simona Foltyn, reporting from Baghdad, said the death toll was likely to rise because many of the injured had severe burns.

There were 30 patients and dozens of relatives in the ICU – reserved for the capital’s most severe COVID cases – at the time the fire started.

Videos on social media showed firefighters trying to extinguish flames at the hospital on the southeastern outskirts of the Iraqi capital, as patients and their relatives tried to flee the building

At least two doctors at the scene confirmed they believed an oxygen cylinder had caused the flames that raged through the second floor of the hospital.

Iraqi hospitals do not usually have a central supply of oxygen and patients who need it are given a cylinder that is placed by their bed. Given staff shortages, relatives are sometimes required to change the cylinders, a doctor told Al Jazeera.

“The majority of the victims died because they had to be moved and were taken off ventilators, while the others were suffocated by the smoke,” the civil defence said.

The health ministry, which did not put out a statement until several hours after the fire, said it had “saved more than 200 patients”.

The fire triggered outrage on social media in spite of the prime minister’s investigation announcement.

“That is not enough for Iraqis,” Foltyn said. “We often hear the government promising investigations but we rarely see the results or the government officials responsible for what appears to be neglect or mismanagement being brought to account.”

In a statement, the government’s human rights commission said the incident was “a crime against patients exhausted by COVID-19 who put their lives in the hands of the health ministry and its institutions and instead of being treated, perished in flames”.

Baghdad Governor Mohammed Jaber called on the health ministry “to establish a commission of inquiry so that those who did not do their jobs may be brought to justice”.

UN envoy to Iraq Jeannine Hennis-Plasschaert expressed “shock and pain” over the incident in a statement and called for stronger protection measures in hospitals.

The total number of people who have been infected with COVID-19 in Iraq is 102,528 including 15,217 deaths, the health ministry said on Saturday.

Iraq launched its coronavirus vaccination campaign last month and has received nearly 650,000 doses of different vaccines – the majority by donation or through the COVAX programme, which is helping lower and middle-income nations to procure vaccines.

Health authorities have faced an uphill battle to convince Iraqis to get vaccinated in the face of widespread scepticism over the jab and public reluctance to wear masks since the start of the pandemic.