Diab calls on Qatar to rescue Lebanon from ‘total collapse’ 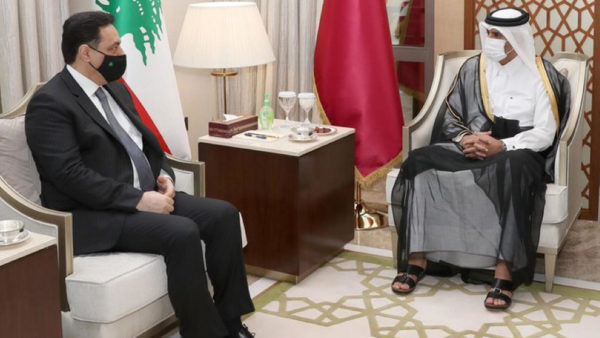 Lebanon’s caretaker Prime Minister Hassan Diab called for wealthy Qatar’s help during a visit to the Gulf country on Monday as his nation sinks deeper into economic ruin.

Diab has met with several prominent Qatari ministers and officials during the trip which Lebanese media has suggested has been mired in “secrecy”.

“Lebanon has reached the brink of total collapse, as a result of decades of corruption and policies that have encouraged a rentier economy at the expense of a productive economy,” Diab told local media.

“We knock on (Qatar’s) door just as we will knock on the doors of other sister Arab countries and wait for it to open its doors for us, as did sister Qatar.”

Despite public outrage and international pressure to form a government so as to enact reforms needed to unlock aid pledges, wrangling over cabinet posts persists eight months after Diab’s government resigned.

It followed a devastating explosion at the Beirut port in August, widely blamed on official negligence.

A steep depreciation of the Lebanese pound along with an explosion of poverty and unemployment have eroded purchasing power and fuelled anger among the population.

Diab did not give any details of what aid had been requested or what would be forthcoming from Doha.

“These details are owned by (Qatar’s) Emir and prime minister, but I think that there are positives that will be announced,” he said.

It is not clear if Qatar would provide assistance before Lebanon announces a permanent government.

Qatar indicated in February that it was ready to help kick-start Lebanon’s flailing economy, but only if its deeply divided political class agreed on a new government.

This week’s three-day trip is Diab’s first official visit since taking office, having cancelled trips to Cairo and Baghdad.

“Lebanon is in grave danger and it can no longer wait without a safety rope,” Diab added in the Qatari capital.

“We expect you to be on the side of this country — Lebanon hopes that you will be a safety net to protect your Lebanese brothers.”

Lebanese daily An-Nahar said in an editorial ahead of the trip that “the caretaker PM surrounds the visit with secrecy”.