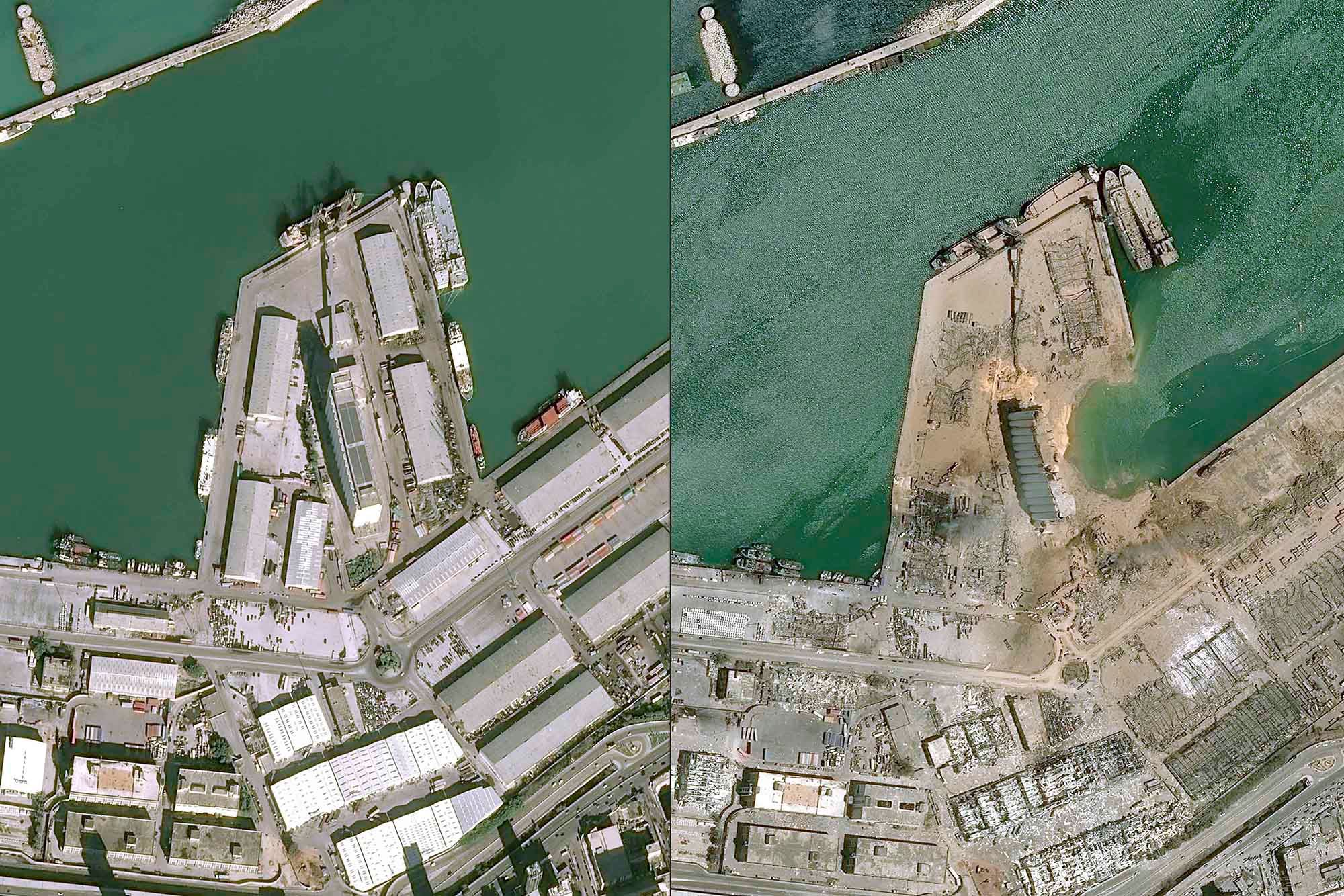 A combo of satellite images of the port of Beirut and the surrounding area in Lebanon, before the Aug 4 explosion and and after. 211 people were killed , 6500 Injured after several hundred tons of ammonium nitrate exploded . 2750 tons were stored there for nearly 7 years, reportedly for use by the Syrian regime in its barrel bombs. The shipment was reportedly confiscated by Badri Daher a close associate of President Michel Aoun and his son-in-law Gebran Bassil , both are allied with the Syrian regime . The shipment arrived at a time when Syria was surrendering its chemical weapons to a UN backed organization for destruction . Aoun officially knew about the Ammonium Nitrate 2 weeks before the explosion but did nothing about it . He , along with his Hezbollah allies refused an international investigation but promised a local investigation that will bring the culprits to justice in less than a week but 8 months later not one politician has been charged (AP Photo/Hussein Malla, Beirut, Lebanon(Photo by Anwar Amro/AFP)
Share:

PARIS – French container shipping group CMA CGM is pursuing a plan to rebuild Beirut’s port within three years, despite political deadlock in Lebanon that has prevented decisions on the port since a blast last August, a company executive said.

CMA CGM’s plan, first outlined to Lebanese authorities in September, envisages the reconstruction of damaged docks and warehouses, along with port expansion and digitalisation, at a total cost estimated at $400 million to $600 million, Joe Dakkak, general manager CMA CGM Lebanon, said on Saturday.

“Our offer remains on the table,” he told Reuters. “Our project is a realistic one because the situation is urgent.”

Dakkak said the German initiative was more focused on longer-term real-estate development but CMA CGM would be willing to contribute to the port part of that project if invited to.

The French government is not part of CMA CGM’s reconstruction plan, Dakkak said, adding French companies and financial institutions had shown interest, and that the Lebanese state would have a role through a public-private partnership.

As well as devastating the bulk section of Beirut port, last year’s blast destroyed equipment in the container terminal. This has doubled waiting time for vessels, adding to longstanding inefficiencies at the port, according to Dakkak.

CMA CGM is the leading shipping operator at Beirut port, accounting for 60% of volumes, and remains a candidate in partnership with Swiss-based MSC for the concession to run the container terminal, Dakkak said.

It has been told a tender process to run the container terminal, held up by the political crisis, will be relaunched in two weeks, he added.