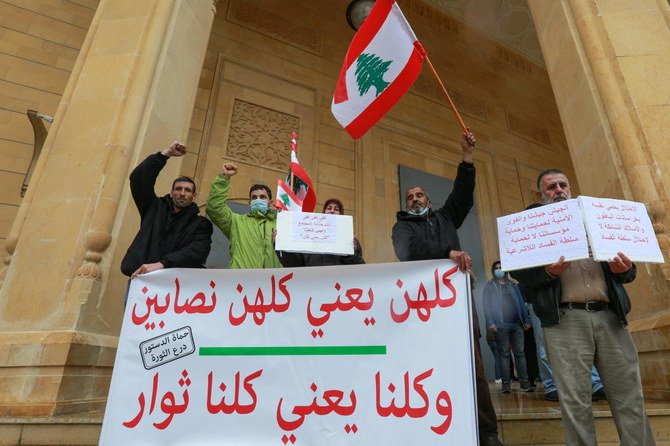 Demonstrators hold a banner in Arabic during a protest over the deteriorating economic situation, in Beirut, Lebanon April 10, 2021. The banner reads” they are all crooks and we mean all ( the politicians ) and we are all revolutionaries and we mean all of us (Reuters)
Share:

BEIRUT: Heavy rainfall on Saturday afternoon prevented large numbers of people from participating in a “Day of Rage” in the heart of Beirut, declared by the Oct. 17 groups demanding a transitional government with exceptional legislative powers.

These groups are trying to reactivate protests against the political class that they accuse of corruption.

Waddah Sadek, deputy head of the “I Am a Red Line” initiative, told Arab News: “We support these protests. The aim on this day was to mobilize school and university students to take to the streets and encourage people to gradually return to the streets to express their anger. Protest squares have been empty in the past few months due to the coronavirus and people are disappointed as demos did not manage to make any change on the governmental level.”

Sadek talked about “the recent mistakes of protesters, caused by some disputes over minor issues that could have been avoided.”

Sadek said that “the main revolutionary groups, opposing political parties, independent politicians and intellectual figures will announce the formation of an opposition political front by the end of April, that has a political program aiming to form a rescue government that would save the country.

“The current political class is unable to form an alternative government. Any government they form will only be the same as the current one,” he said.

Judge Shoukri Sader, who served as head of the State Shoura Council before retiring, told Arab News: “If protesters do not unite, the same politicians will be elected in 2022. Those in power now are seeking to divide us. If we present three electoral lists in the next parliamentary elections, they will beat us. Today, we are risking our own presence. We cannot remain divided; therefore, we are forming a political front to unify votes and priorities.”

He added: “We cannot play their game; they disagree on the government’s nature and quota. We, on the other hand, must unite and put the small details aside.

“Large groups of protesters are communicating via Whatsapp and Facebook and each one of them has their own demands and opinions. What is required of these groups at this point is to be mature and aware, before actually trying to wake up the silent majority of Lebanese who are suffering.

“Activists must agree on the priorities and must not force others to follow them. People quit their political parties and joined us not to be forced to follow opposing politicians and partisans nor to be marginalized.

“The top priority we should agree on is the rejection of Hezbollah’s arms. We must reclaim the decision of the state from its kidnappers. Our second priority is restoring the provisions of the constitution because the Lebanese constitution includes all our sovereignty demands; the neutrality of Lebanon, a parliamentary republic and a free economic system. Therefore, let us cut to the chase and call for early elections and a transitional government. The country is collapsing.”

He said: “President Michel Aoun’s experience in power has been unsuccessful, from the War of Liberation in the 1980s, the War of Cancellation until his current mandate. He has only done the opposite of what he promised and has put his personal interests above the national interests. We are aware that in Lebanon, revolutions are doomed to fail, and we are also aware that a new civil war is impossible since there is no equity among fighters in the presence of Hezbollah’s arms. Chaos might prevail and this is what is making us wait for the constitutional deadlines to make the change.”

One hundred and seventy days have passed since Saad Hariri’s nomination to form a new government, yet officials are still swapping responsibilities and accusations without establishing any social security network for the poor and needy amid the worsening economic collapse.

Zeina Akar, defense minister in the caretaker government, shed light on the living situation of soldiers during a visit she made to a town in the Bekaa valley. She said that soldiers’ salaries had lost 85 percent of their value against the US dollar. “Soldiers can no longer provide for their families or even pay transportation to and from work,” she said.

Akar urged soldiers “not to slip into anything that could prevent them from performing their duties because they represent the safety valve protecting Lebanon’s sovereignty and people, and preserving its security and stability.”