Armenia PM to resign ahead of snap election to defuse crisis 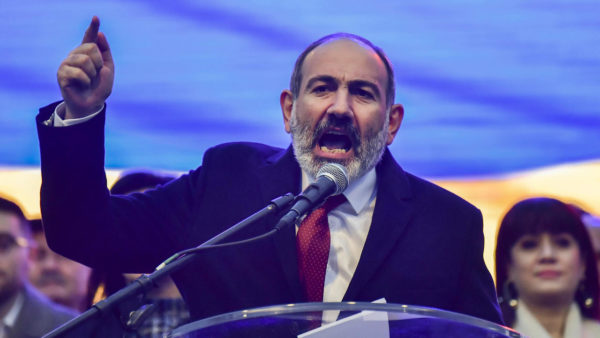 Armenian Prime Minister Nikol Pashinyan has been under pressure to step down after accepting a ceasefire with Azerbaijan, which many saw as a national humiliation ARIS MESSINIS AFP/File
Share:

Prime Minister Nikol Pashinyan announced Sunday he will resign next month but stay in office until parliamentary elections due on June 20, in an effort to curb the political crisis gripping Armenia.

Political unrest erupted in the Caucasus country after Pashinyan in November signed a Russian-brokered ceasefire agreement with Azerbaijan that ended six weeks of fighting for control of the disputed Nagorno-Karabakh region.

The prime minister this month announced snap parliamentary polls that he said were “the best way out of the current internal political situation”.

In a visit to northwest Armenia on Sunday, Pashinyan told villagers he will “resign in April” ahead of the vote.

“I will resign not to resign, but in order for early elections to take place,” he said, according to a video published on his Facebook page.

“I will continue to serve as interim prime minister,” he added.

Pashinyan has been under pressure to step down after agreeing to the ceasefire, which many in ex-Soviet Armenia saw as a national humiliation.

Yerevan handed over swathes of disputed territory to Azerbaijan under the deal and allowed Russian peacekeepers to deploy to regions it had controlled for three decades.

Both anti-government protesters and Pashinyan’s supporters have regularly taken to the streets in the months since.

Under election laws, Pashinyan has to resign by April 30 for early parliamentary polls to take place.

Pashinyan said that if voters support him and his team, they will “continue to serve you better than before”.

“If not, we will transfer power to whoever you select,” he added.

The 45-year-old former newspaper editor came to power spearheading peaceful protests in 2018 and initially brought a wave of optimism to Armenia.

But the war over Nagorno-Karabakh, an ethnic Armenian region that broke from Azerbaijan’s control during a war in the early 1990s, severely dented his popularity.

Fresh fighting erupted over the region in late September with Azerbaijan’s better-equipped army backed by ally Turkey making steady gains. The conflict claimed around 6,000 lives from both sides.

Pashinyan has insisted he handled the war correctly, saying he had no choice but to agree to the peace deal otherwise Armenia’s forces would have suffered even greater losses.

The post-war crisis reached a boiling point last month after Pashinyan fired the country’s most senior military official, accusing the army chief of staging a coup after he urged the prime minister to resign.

Prominent members of the opposition had welcomed Pashinyan’s announcement of snap polls earlier this month, saying that only a new government would allow the country to move past the Karabakh defeat.

Analysts however say that Pashinyan will likely retain his grip on power after the election, even if he has to form a coalition with other parties.