Suez shows civilization is more vulnerable than we think 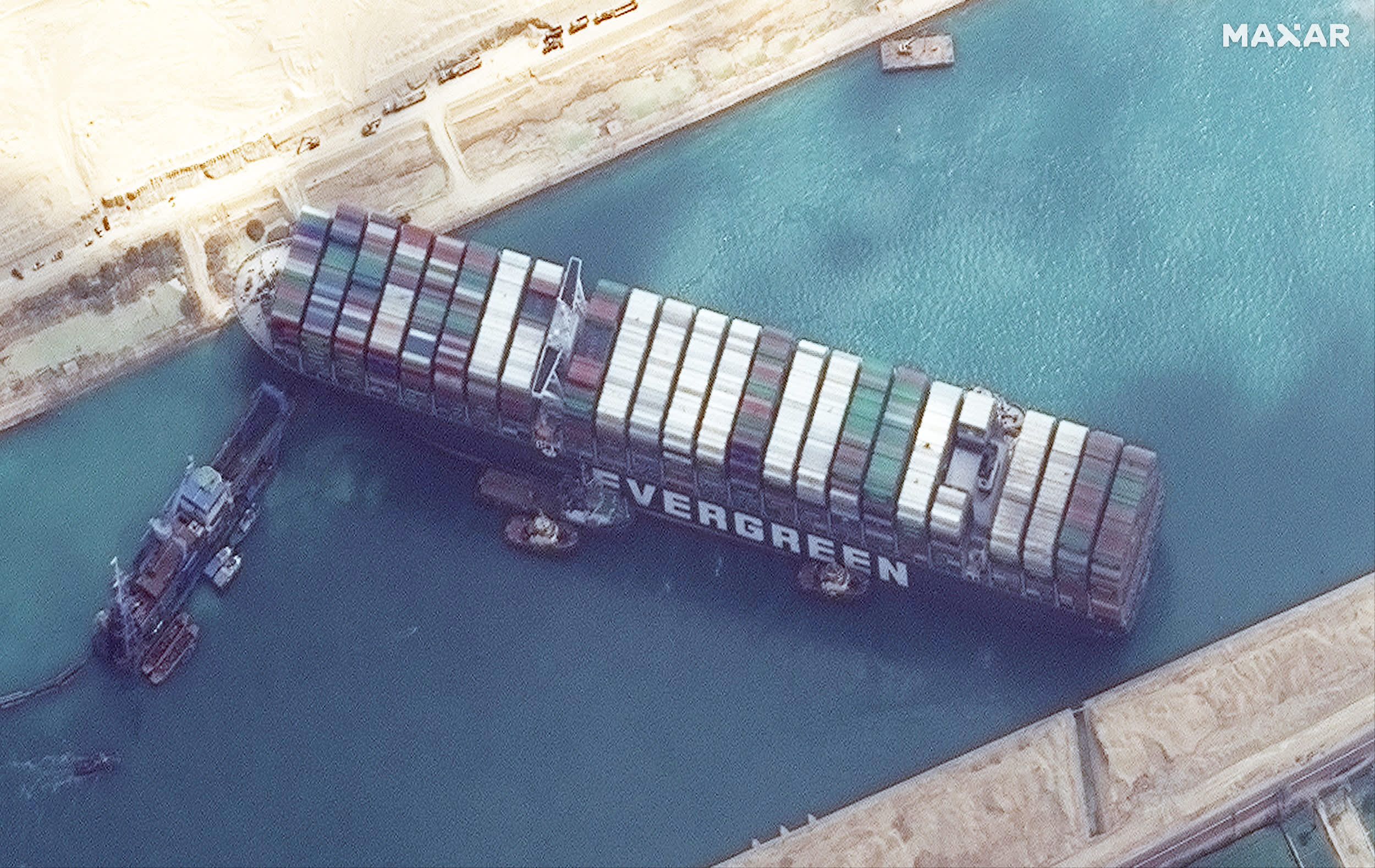 Satellite images of the stuck ship Ever Given, the mega container vessel that’s been blocking the Suez Canal for days.
Share:

A gust of wind was all it took to bring global container flows and oil shipments to a halt. The errant container ship that blocked the Suez canal this week has cut off a route that handles more than 10% of international trade.

Part of this situation was simply unfortunate: Egypt has expanded parts of the canal to enable two-way traffic and accommodate larger carriers. The Ever Given ship went off course and got stuck in part of the waterway that’s still narrow.

But it’s also a reminder that even an advanced civilization like ours has points of acute vulnerability. In the strategy and military realm, such bottlenecks are also known as “choke points.” And we often don’t pay enough attention to them until something goes wrong.

Systems designers strive to avoid these single points of failure, so that transport, energy and communication networks are able to withstand attacks or unexpected calamities. (The twin crashes involving a Boeing 737 Max are one example of a flawed design — a single sensor gave faulty readings to the plane’s automated flight system.) Technological advances and globalization were also supposed to make us less susceptible to this type of problem. The internet, for example, was conceived as a decentralized system that’s pretty difficult to break, as was Bitcoin.

But global infrastructure, defined broadly, still has a surprising number of pinch points. These can be difficult to remedy, as creating back-up options is expensive and counteracts economies of scale. In some cases, the problem is even getting worse: Industries are becoming more concentrated due to corporate takeovers. Furthermore, big chunks of our lives are now mediated by a just handful of technology companies. Nokia Oyj, Ericsson AB and China’s Huawei Technologies Co. Ltd control about 60% of the telecoms equipment market, for example.

The upshot is that governments are now more cognizant of the political and economic power held by those who control choke points. It’s one reason why the U.S. has big concerns about Huawei’s involvement in building critical 5G networks.

But first, back to canals. Our creator did a fine job with Planet Earth but if you were to nit-pick, she perhaps didn’t think enough about the needs of the shipping and oil industries. The Panama Canal (which connects the Atlantic and Pacific oceans), the Suez Canal (linking the Mediterranean and the Red Sea) and the Strait of Hormuz (at the mouth of the Persian Gulf) are places where container ships and oil tankers are forced to navigate narrow passages. The alternative is a long detour or more expensive air freight.

For decades these waterways have been recognized as areas of huge strategic importance and as being susceptible to military or terror attacks. Iran has frequently used the Strait of Hormuz to pressure foreign powers. Various back-up routes have been mooted but most haven’t materialized. Nicaragua pitched a canal linking the Pacific and Caribbean Sea, for example, but the rumored cost of $50 billion has been prohibitive.

One can perhaps excuse vulnerabilities arising from the natural world, but we should be less accepting of those in the economic sphere over which we have more control.

Consider energy. In seeking to rid itself of one pinch point — the fact that Europe gets much of its gas via pipelines that traverse Ukraine — Germany has created another: the twin Nord Stream gas pipelines that connect Russia and Germany under the Baltic Sea. The U.S. worries these will weaken eastern Europe and increase Germany’s dependence on Russia.

In the realm of finance, trillions of dollars of financial instruments are tied to the London interbank offered rate, which a small circle of banks found to be shockingly easy to manipulateuntil they were exposed in the years following the 2008 financial crisis. Libor is now being replaced. Similarly, Europe has long relied on the Swift payments system and the U.S. dollar, but that dependence came into question in 2018 as it disagreed with the U.S. over Iran sanctions.

In technology, people have warned for years that the U.S. needs a back-up for the Global Positioning System, the satellite-based navigation infrastructure that underpins much of the modern digital economy. The system can be spoofed or otherwise disrupted. It has yet to develop one.