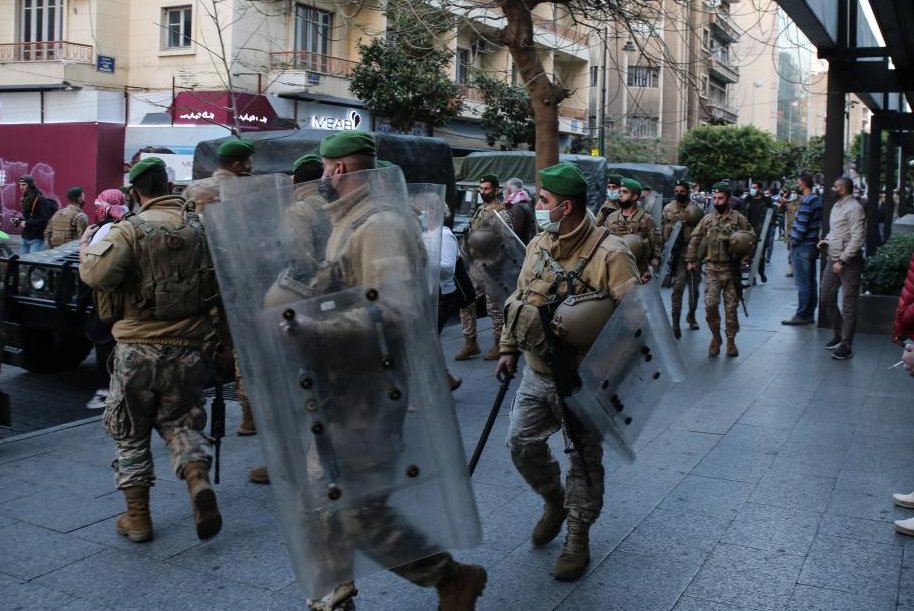 Lebanese army soldiers, shown guarding an area during a demonstration on February 26, face the prospect of not getting paid, as well as increased citizen uprisings. Lebanon’s army chief warned earlier this month that soldiers are hurting from the severe economic crisis engulfing the country, voicing rare criticism from the military of a ruling class that has done little to try and resolve a monthslong political deadlock. He said the army is hungry too Photo by Nabil Mounzer/EPA-EFE
Share:

Lebanon’s economic collapse appears to be accelerating. The national currency lost a third of its value in the past two weeks alone, crashing to a new record low on March 16 at 15,000 to the US dollar, sparking renewed protests across the country and placing further strain on Lebanon’s overstretched security forces. Meanwhile, political leaders continue to squabble over forming a new government that is supposed to launch a reform program that should unlock billions of dollars in pledged international assistance to help the economy begin a long-awaited recovery process.

In a clear signal that a total collapse is imminent, senior Lebanese officials—including the commander of the Lebanese Armed Forces (LAF)—have sounded the alarm about the deteriorating situation in recent days. Raymond Ghajar, the energy minister in the outgoing government, warned that Lebanon could witness “total darkness” by the end of March if funds are not allocated to purchase fuel for power stations. Economy minister Ghazi Wazni has said that government subsidies on gasoline will be gradually lifted in April, which spurred long lines outside gas stations, as motorists attempted to fill up their vehicles before prices rise.

Interior minister Mohammed Fahmy said on February 17 that the Internal Security Forces (Lebanon’s police) cannot carry out 90 percent of their duties. LAF Commander General Joseph Aoun added his voice to the flurry of warnings, delivering unprecedented public criticism of Lebanese politicians for their failure to tackle the economic crisis.

Serving LAF officers rarely comment publicly on politics, underlining the gravity of the economic crisis and its effect on the army. Prices of everyday goods have skyrocketed, businesses are shuttering, banks have slapped arbitrary capital controls on US dollar-denominated accounts, and the United Nations estimates that more than half of Lebanon’s population of six million live below the poverty line. Lebanon’s security services have been affected along with everybody else. A LAF sergeant received the equivalent of $860 per month before the financial crisis hit in October 2019. Today, his salary is worth around a mere $90.

The root of the economic crisis lies in three decades of inept government performances, massive waste of state funds, and rampant corruption by a cabal of sectarian oligarchs who have dominated the political landscape since the end of the 1975-1990 civil war.

The government of Prime Minister Hassan Diab resigned in August 2020 in the aftermath of a massive explosion in Beirut port that killed over two hundred people and decimated a swathe of the city. Saad Hariri, a former prime minister, was appointed to replace Diab, who continues to serve with his cabinet in a limited caretaker capacity. But the government formation process remains deadlocked seven months on, resulting from disagreements between Hariri and President Michel Aoun and his son-in-law Gibran Basil, head of the Free Patriotic Movement, over the size and composition of the cabinet.

The US has provided financial assistance to the LAF amounting to more than $2 billion since 2007 and has helped turn the army into a more effective fighting force. The LAF is the one state institution generally respected by the Lebanese and is the only security organ that can maintain stability as the situation worsens. But, in the past year, concerns have been raised that the LAF could begin to disintegrate if the economy continues to slide. There have been reports of soldiers going absent-without-leave, although the numbers cited have almost no impact on operational capabilities for now.

So far, the Joe Biden administration has not signaled any changes to ongoing US military support to Lebanon. Nevertheless, the LAF remains under scrutiny given accusations that it is too close to the powerful Iran-backed militant group, Hezbollah. The relationship between the two is complex, subtle, and nuanced, and often not fully understood in Washington. While the Directorate of Military Intelligence is generally cooperative with Hezbollah—particularly on counter-intelligence matters related to Israel and extremist Sunni groups—other regular LAF units have little or no contact with the organization. Many LAF officers and soldiers bristle at the notion of having to share national defense duties with a sectarian militia that is ultimately answerable to Iran’s Supreme Leader. The stark reality is that Hezbollah has grown too large and powerful for the LAF or any other Lebanese state security or political body to bring to heel. So long as Hezbollah can maintain the popular support of the majority of Lebanese Shias and the state backing of Iran, resolving its armed status will remain a regional and international problem, one beyond the capacity of the Lebanese alone.

Critics of US support for the LAF also cite allegations that it has used excessive force against protestors since demonstrations against the country’s political leadership erupted in October 2019. While some LAF soldiers have resorted to violent behavior at times, many of them quietly sympathize with the protestors as they share the same economic hardships. Additionally, General Joseph Aoun has pushed back against President Michel Aoun’s past demands to re-open—by force if necessary—roads blocked by protestors. From his comments on March 8, it is clear that General Aoun is acutely aware of the mood of rage and frustration most Lebanese feel toward the political class, and is carefully treading a path between his duty as an army commander beholden to the state and his responsibilities toward safeguarding the Lebanese people.

Much thought has been given over the past year to help ameliorate the impact of Lebanon’s economic crisis on the LAF so that it can maintain unit cohesion, continue to perform its duties, and safeguard stability. Currently, the LAF’s priority is not the acquisition of new weapons systems or military equipment. The key is to ensure the economic wellbeing of the soldiers so that they do not feel compelled to desert and find alternative means of earning a living, thereby undermining the institution’s integrity. A mechanism should be found that would allow US financial assistance for the LAF to be temporarily switched away from supplying military hardware to providing social welfare and logistical aid, such as food, clothing, diesel fuel for heaters, and gasoline for vehicles. Alternatively, goods could be subsidized at the LAF’s equivalent to the US military’s post exchange stores. Furthermore, to resolve the fiscal dilemma of LAF salaries, it might be worth examining if a structural mechanism could be established that would allow soldiers to withdraw lira from their accounts at the black market rate, instead of the central bank approved rate of LL3,900 to the US dollar. The US could help with this mechanism by delivering some of its annual financial assistance as an economic aid package for the LAF to either the Lebanese central bank or a vetted and trusted independent bank. The funds would cover the difference between the central bank’s current platform rate of LL3,900 to the US dollar and the LAF’s preferential salary rate, which would match the black market.

Admittedly, bureaucratic and legal obstacles in both the US and Lebanon may well weigh against such steps, but saving the LAF requires some urgent and creative thinking.

There is no magic wand that can be waved by the US or anyone else in the international community that will reverse Lebanon’s decline, especially given the venality and selfishness of its political barons who still seem content to fiddle even as the country burns. But another failed state in the Middle East—one that sits on Israel’s northern border and is home to the world’s most powerful non-state military actor—is in the interest of no-one. Lebanon’s total collapse will hasten a new wave of refugees—Lebanese, Syrians, and Palestinians—toward European shores. It will leave Hezbollah as the dominant security actor and open the country to greater Iranian, Syrian, and Russian influence.

The Biden administration is turning its attention away from the Middle East to address the growing global challenges posed by Russia and China. But the administration can help Lebanon by maintaining its overall support for the LAF while exploring the best means of delivering that assistance to allow the LAF to ameliorate its socio-economic challenges and contain the inevitable social explosion across the country as the situation deteriorates.

Nicholas Blanford is a nonresident senior fellow with the Middle East Security Initiative at the Atlantic Council’s Scowcroft Center for Strategy and Security.