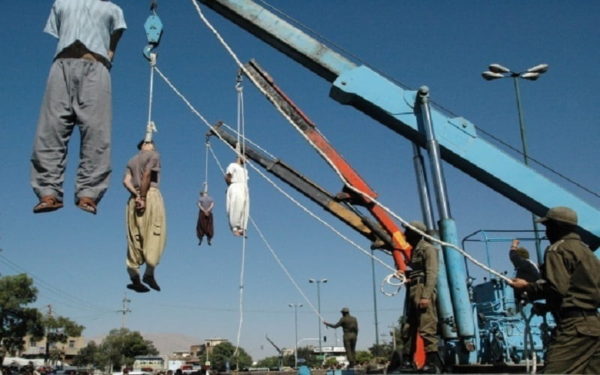 Hanging has been a common method of capital punishment in Iran . Human rights violations in Iran includes torture, rape, juvenile execution and execution of political prisoners, dissidents and minorities.
Share:

He issued a statement on introducing the “Iran Human Rights and Accountability Act of 2021,” which includes Lebanon’s Hezbollah and the Iran-backed militias in Syria and Iraq.

“I introduced the Iran Human Rights and Accountability Act of 2021, which stands with the people of Iran and their desire to live in freedom and with basic human rights,” the statement read.

“I am grateful for the support of Congressmen Jim Banks and Greg Steube on this legislation,” Wilson added.

He further recalled those lost during the crackdowns on peaceful protests, for which the regime is responsible.

Wilson considered that in any debate on US policy towards Iran, the rights of people to live in peace and freedom should not be forgotten.

The bill requires a determination on whether senior Iranian officials, including the Supreme Leader and senior ministers, meet the criteria for sanctions under the bipartisan Comprehensive Iran Sanctions and Divestment Act (CISADA) and an Executive Order by former President Barack Obama sanctioning human rights violators in Iran.

It further demands ensuring the US policy to support democracy and human rights is implemented in Iran, as well as the free flow of information into Iran, and holding the Iranian regime accountable for its human rights abuses against the people of Syria, Iraq, Yemen, and Lebanon.

According to the bill, a report into the wealth of the Supreme Leader of Iran including wealth obtained through corrupt or illicit activities is required.

It calls for issuing a report into human rights abuses in Iran in response to human rights protests in 2017, including a list by province in city of local law enforcement forces responsible for the violent crackdown.

In addition to the aforementioned requirements, the introduced bill requests a determination into whether Iran and its militias have committed war crimes or crimes against humanity against Iranian people and the people of Syria.