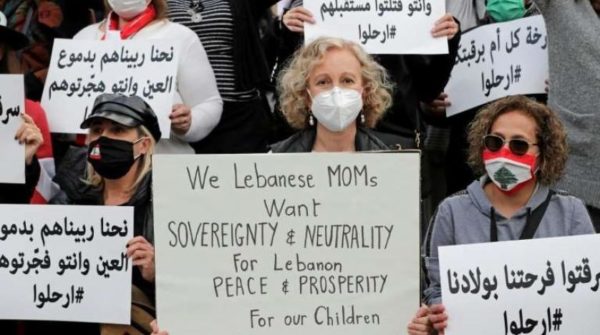 Lebanese women hold placards as they protest against the country’s political paralysis and deep economic crisis in Beirut on the eve of Mother’s Day in the country. (AFP)
Share:

Women demonstrated in crisis-hit Lebanon on Saturday on the eve of Mother’s Day in the country, expressing outrage at the ruling class.

The mothers, some with their children, marched from an area once on Beirut’s dividing line during the 1975-1990 civil war, to the city’s port, which saw a catastrophic explosion last year — blamed on official negligence — that killed more than 210 people and injured thousands.

“You have stolen our money and our children’s futures,” several placards read.

“The best gift would be your leaving,” read another.

Lebanon is battling its worst economic crisis in decades. The national currency has lost almost 90 percent of its value against the dollar on the black market and consumer prices have soared.

Some 55 percent of Lebanese now live below the poverty line, the United Nations says, and unemployment stood at 39.5 percent late last year.

The government resigned after the port explosion, but endless haggling between the main ruling parties has delayed the process of forming a new cabinet.

“They are all war criminals, warlords,” protester Nada Agha told AFP, referring to the fact that several politicians were militia leaders during the civil war.

“They have been dividing up the pie among themselves (for 30 years)… and have blown us up and stolen our money. We want them to leave!” she said.

Another demonstrator, Petra Saliba, in her fifties, said “no solution is possible while they are in power”.

“We want to destroy them as they have destroyed us.”