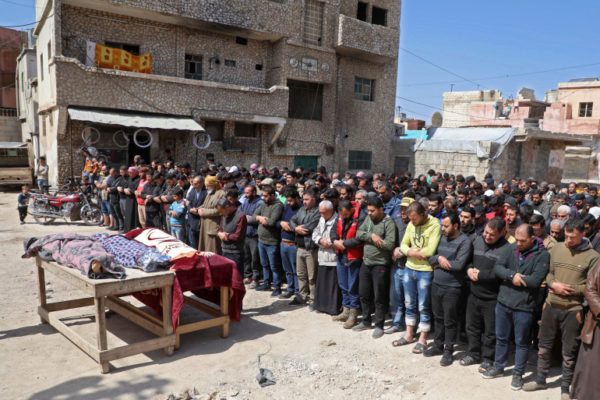 Syrian mourners pray during a funeral in the the village of Atareb
Share:

Five civilians, including a child, were killed after government forces fired on a hospital in Atareb, a town in rural western Aleppo.

The attack on Sunday on the town of Atareb in Aleppo’s countryside came despite a Russian-Turkish ceasefire since March 2020, supposedly to protect the wider rebel-held stronghold.

The shelling “hit the courtyard and main entrance of the hospital inside a cave, killing five civilians including a child and a hospital employee,” the Syrian Observatory for Human Rights said.

The Syrian Civil Defence – also known as the White Helmets – a volunteer search-and-rescue group that operates in rebel-held parts of Syria, confirmed that the attack had killed five people.

It also said that at least nine medical personnel were injured, and had put the hospital “out-of-order”.

Al Jazeera’s Adham Abu Hussam, reporting from neighbouring rebel-held Idlib province, said that the hospital used to serve some 100,000 people in the area.

The area is also included in the de-escalation zone agreed upon by Russia, Iran and Turkey – an area which stretches from the northeastern mountains of Latakia to the northwestern suburbs of Aleppo city.

The hospital is located underground, a tactic used by the opposition to avoid being targeted in the conflict-prone area.

In a statement, the White Helmets said the attack is a “continuation of the regime and Russia’s systematic policy of targeting medical facilities and hospitals”.

A Statement from the Syrian Civil Defense about the Massacre Committed by the Assad Regime, by Targeting the Al-Atareb City Hospital

In a report released earlier this month, the the International Rescue Committee highlighted the ways in which the war in Syria has turned hospitals from places of shelter to danger zones.

Hospitals and clinics have been targeted and destroyed in cities across the country amid fighting between government forces – backed by Russia and Iran – and armed opposition groups.

According to the report, an estimated 70 percent of the health workforce has left the country, leaving just one Syrian doctor for every 10,000 civilians. Only 58 percent of hospitals remain fully functional, the UN says.

This is also true in neighbouring Idlib, which was dubbed a “dumping ground” for evacuees who fled government offensives in other parts of the country, is now facing a raging coronavirus pandemic while much of its healthcare facilities are in ruins.

The region is home to nearly 3 million people, most of whom are internally displaced.

The ceasefire brokered by rebel-backer Turkey and regime ally Russia last March stemmed a months-long regime military offensive on the region – the last rebel-held bastion – that killed hundreds of civilians and displaced more than a million people from their homes.

It has since largely held despite repeated violations including Russian air strikes on the region, according to the Syrian Observatory.

Meanwhile, the United States-based Physicians for Human Rights has documented 598 attacks on at least 350 separate healthcare facilities in Syria since March 2011, the vast majority of them allegedly committed by the Syrian government and allied forces, including Russia. In the same 10-year period, at least 930 medical personnel were killed, the rights group said.

Between 2016 and 2019, the World Health Organization documented up to 337 attacks on healthcare sites in Syria’s northwest.

The health directorate in the rebel-controlled northwest said Sunday’s attack was the first on a medical facility in the region since February 2020.

The war, now widely seen as a proxy conflict, has killed more than 388,000 people and displaced millions at home and abroad since starting in 2011 with the brutal repression of anti-government protests.