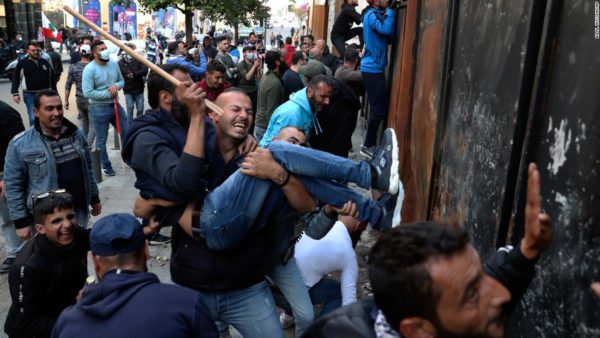 Beirut – In Lebanon, fistfights break out in supermarkets on a nearly daily basis. Long lines snake out of the few gas stations that remain open. Pharmacies have threatened to shutter. Gunfights inexplicably erupt in various parts of the capital. Angry demonstrators have blocked roads around the country, tightening an already stifling economic stranglehold.

The infernal scenes threaten to take a turn for the worse.

Increasingly, Lebanon’s officials and politicians raise the specter of internal conflict. This comes just 31 years after the end of the country’s gruesome 15-year civil war. That black chapter was drawn to a close by a modus vivendi that critics say systematized government corruption, culminating in a financial meltdown that has brought Lebanon, once again, to the brink.

A makeshift roadblock set up by anti-government protesters next to the Mohammed al-Amin Mosque in Beirut’s Martyrs’ Square on March 8.

In a statement to CNN this week, Lebanon’s caretaker interior minister Mohammed Fahmi said there was a heightened probability of “security breaches such as explosions and assassination attempts” in the country.

That fear is echoed by many high-profile politicians who cite conversations with intelligence agents. In a televised speech on Wednesday, Iran-backed Hezbollah’s secretary general Hassan Nasrallah also warned of civil war, drawing a bleak prognosis of the security situation, and calling on the country’s fractured political class to band together to stymy the financial tailspin.

But on Lebanon’s streets, that same political elite is overwhelmingly unpopular. Even ardent supporters of mainstream parties call for an overhaul of the country’s confessional power sharing system, which allots seats by sectarian group. MPs publicly admit their failures, and some of them say that they, too, ought to step down. Leftist groups, such as the communist party, have called for an “escalation” in the country’s popular uprising, which began in October 2019 with the aim of overthrowing the ruling class.

But there is little to no agreement about the future of governance in the country. A cabinet formation process has been in deadlock for four months over disputes between Prime Minister-designate Saad Hariri and President Michel Aoun. Hariri has promised that his future government would stop Lebanon’s collapse and reengage with the International Monetary Fund (IMF), which last year stopped negotiations with the government over a bailout.

But Hariri faces the grueling task of ushering in stinging economic reforms at a time when his popular mandate has greatly diminished. The fledgling parties that have cropped up in recent years in a bid to replace the elite also appear to lack the political clout needed to dislodge the status quo.

That crisis of leadership has exacerbated Lebanon’s financial woes on a spectacular scale. In its Fall 2020 report, the World Bank described Lebanon’s economic depression as “deliberate.”

The report details exactly what that means: A rapid deceleration of economic growth, a tanking currency, small depositors bearing the lion’s share of economic losses, a stunning depletion of the country’s resources including its human capital, and a poverty rate surpassing 50% in 2021.

The catastrophe could have been largely avoided, the World Bank says. Lebanon’s leaders have — to the shock of even some of the most cynical observers — steered clear of enacting policies that could mitigate the financial decline.

The state has done little to nothing to alleviate poverty. Formal capital controls have not been implemented, nearly a year and a half after banks began to limit cash withdrawals to depositors on a discretionary basis. That practice prompted the capital flight of the super-rich, while the working and middle classes helplessly watched their deposits lose most of their real value.

The country also does not have an official exchange rate platform, leaving the plummeting lira at the mercy of shadowy black markets and the ever-present possibility of currency manipulation.

The economic outlook gets bleaker on a nearly daily basis. The country’s currency on the black market has now lost 90% of its October 2019 value. As Lebanon burns through its foreign reserves, caretaker energy minister Raymond Ghajar raised the possibility of 24/7 power cuts during a presser this month, immersing the country in “total darkness.”

The food, fuel, and medicine subsidies that served as the country’s lifeboat may also soon disappear. This week, caretaker prime minister Hassan Diab said Lebanon would scale back those subsidies and added that most of them could only be maintained until June.

The loss of subsidies could be the watershed moment that threatens to tip Lebanon over to Venezuela-like scenarios, exacerbating the existing food, fuel and medical shortages.

Families living on a minimum wage — now less than $50 a month — will be unable to afford basic food staples as inflation skyrockets. Already strained security forces, which must contend with the frustrations of its newly pauperized rank and file, will have to deal with growing crime rates and the possibility of long-simmering political tensions coming to a head.

The only glimmer of hope is the possibility of an imminent political resolution which in turn produces an efficient and effective government. But to most of those familiar with the political elite’s largely miserable track record, this seems like a pipe dream. In the absence of leadership, the economy could continue to hurtle towards the unknown.