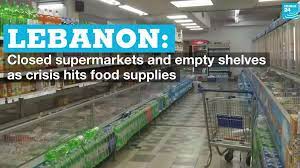 Protesters have returned to the streets of Lebanon in recent days as the country’s economic meltdown, which has brought about the collapse of its currency, continues to wreak widespread hardship. Now the crisis has forced supermarkets and grocery stores around the country to temporarily close, raising fears that a country reliant on imports could soon face food shortages.