Hezbollah chief warns of civil war, will accept a govt of specialists if Aoun and Hariri reach a deal 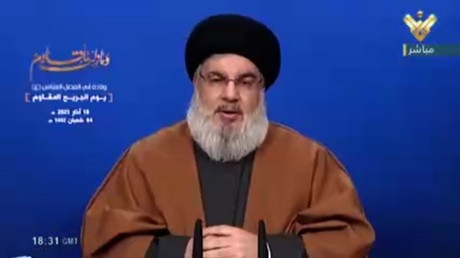 Here are the main highlights of his speech

“When they   find themselves impotent in the face of the resistance in Lebanon, they might resort to this choice (civil war)”, he said without elaborating

At the end of the 15 year civil war in 1990 , Hezbollah was the only party that was allowed by the Syrian occupying force to keep its arms . Hezbollah was reportedly allowed to keep its arms  to resist  Israeli occupation of South Lebanon . Israel pulled out of south Lebanon  about 21 years ago  but Hezbollah  kept its arms and  has since used them  to create a state within  the state of Lebanon . Thanks to Iran and to its alliance with the president of Lebanon Michel Aoun , who is the former army chief ,Hezbollah is now much more powerful that the Lebanese  army

He warned that if  a new government is formed he wants to reactivate the resigned caretaker government of PM  Hassan Diab . Whom he described as a” patriotic man who should not set condition”

Nasrallah blamed the financial crisis on Israeli wars, the Israeli occupation of the South, the U.S. project in the region, its repercussions on Lebanon, and the global war on Syria, the smuggling of deposits abroad, the freezing of deposits in banks, the Beirut port blast, the protests that began on October 17 and the tensions that followed.

Nasrallah did not mention the smuggling of subsidized goods to Syria and Iraq including fuel , medicine and flour  through the illegal border crossing that are under Hezbollah’ control, nor did he acknowledge any responsibility for the port explosion resulting from the   2750  tons of ammonium nitrate  that were stored for the Syrian regime for use in its  barrel bombs against its civilians .

Only about 500 tons exploded according to the FBI , the rest were shipped by  Hezbollah to Syria and to its cells in Lebanon and overseas.