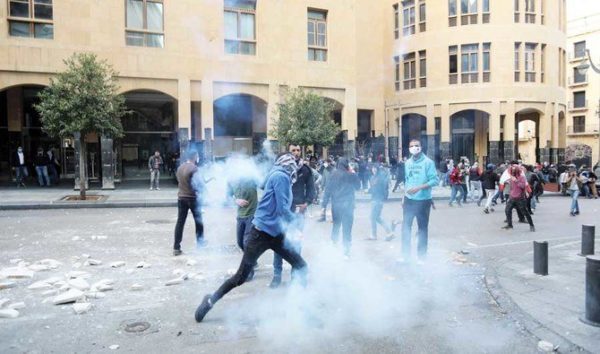 The protests were in Bekaa and came as the national currency continued to slide in value, with the black market dollar exchange rate hitting LBP13,000. (AFP)
Share:

BEIRUT: There is growing discontent among Lebanon’s Shiite community, with protests in areas that are traditionally supportive of Hezbollah and the Amal Movement.

The protests were in the south and northern Bekaa and came as the national currency continued to slide in value, with the black market dollar exchange rate hitting LBP13,000 on Sunday.
Activist Hussein Ezz El-Din said that many Shiites loyal to the two political parties worked in public institutions or those established by them.

“During the previous period of the popular uprisings, these people did not express their dissatisfaction in the street, and it was impossible to rise (up),” he told Arab News. “Most of the Shiite protesters in the street were either left-wing or independent. But, with the unprecedented collapse of the Lebanese pound over the past week, these people are beginning to show their anger. Their salaries, which are paid in the local currency, are no longer sufficient for them for more than a week. Even people who get their paychecks in dollars from Hezbollah have begun to feel the heat.”
There has been an increase in theft in Beirut’s southern suburbs, Bekaa and the south, according to reports from the Internal Security Forces, as well as an increase in clashes between clans. The uptick in fighting and criminal activity  suggests that the reach of Hezbollah and the Amal Movement, which are the de facto authority in these areas, was retreating. The Lebanese pound lost more than 20 percent of its value in 24 hours.
A videotape circulating on social media showed Sheikh Yasser Auda, who is loyal to Hezbollah, berating the party. He said the situation was no longer tolerable and that people were hungry. “If they are still silent, it is because they respect Hezbollah and the Amal Movement until now.”
Auda, who deals with jurisprudence and social issues, said that Shiites could no longer tolerate “humiliation” to this degree.
“Where have you taken us?” he demanded to know. “Stop asking us to be patient and stop laughing at our beards. Whoever gets hungry will turn into a thief and drug dealer. How can a person, who has to feed his children, buy medicine for his father, pay the rent or hospital expenses, be patient?”
He called on Hezbollah and the Amal Movement to think about Lebanon. He said they should think about how they integrated themselves into their homeland and respected their people because all sects were hungry, even the Lebanese army. “People are screaming under the table today, but tomorrow they will be screaming over the table, and then how will you respond?”
Activist Ali Al-Amin said that Hezbollah loyalists concealed their pain because, if they raised their voice, they would be accused of treason. “There is a muffled discontent that may appear when the time is right,” he told Arab News. “The needs will increase the chaos and congestion, and we do not know how people explode.”
Two prominent party loyalists, Anis Al-Naqash and Qassem Kassir, raised the issue of Hezbollah’s fate in light of the worsening economic crisis.
Al-Naqash said the collapse of Lebanon would be the end of the resistance, while Kassir asked the party to become independent of Iran, return from Syria where it fought for Iran in defense of President Bashar Assad, and to turn its attention toward Lebanon’s domestic chaos.
But Hezbollah loyalists accused Kassir of betrayal, with the campaign against him persisting until he offered an apology.
El-Din said that those who received their salaries in dollars from Hezbollah had begun to feel hostility from neighbors, relatives, and the community. “A social rift has taken place. People criticize them and tell them that the money in their pockets will not buy them anything when the shops close and ‘you will starve like us.’”
He added that these people did not have excuses to defend themselves. Instead, their flaunting of luxury cars had decreased and they had curtailed their social mobility. “In Tyre, people cannot afford to drive to work. When the neighbor of the rich man gets hungry, he will knock on his door, and when general stability is shaken, it will affect everyone.”