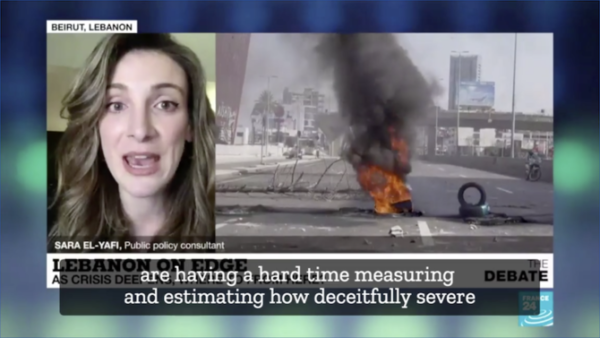 Sara El-Yafi was highlighting the severity of the country’s crises on France 24 and used strong language to describe Lebanon’s political leaders. (Screenshot)
Share:

LONDON: A video of a Lebanese public policy consultant and activist ripping apart the government during a TV debate went viral on social media platforms Thursday, with many lebanese sharing it as a way to express their mounting frustration with the current situation in their country.

Sara El-Yafi was highlighting the severity of the country’s crises on France 24 and used strong language to describe Lebanon’s political leaders.

“They are mafia lords, militia lords, a can of carcinogenic worms who thrive and survive in sectarian divides,” she said in a fiery monologue that summed up what many Lebanese people had been feeling over the past year. “Hyperinflation is a rare phenomenon in the world, but it is the daily bread of the Lebanese people. This comes at the backdrop of a country that has seen no economic growth for years due to the incomprehensible incompetence of a dreadful ruling class, a damning ruling class that has invested none of our resources on any form of productive investment or societal nation-building but instead was spending, embezzling, stealing the funds of the Lebanese people to uphold their mafia feudal kingdom.”

Lebanon is fighting battles across multiple fronts: An unprecedented economic crisis that has seen the national currency lose 85 percent of its value, a political struggle that has seen Prime Minister-designate Saad Hariri still without a government months after being tasked to form one, and the coronavirus pandemic.

In addition, half of the capital Beirut was levelled by last August’s explosion that killed over 200 people and left around 300,000 homeless, and the caretaker energy minister earlier warned that Lebanon was heading toward “total darkness” at the end of the month due to its inability to supply electricity.

A word about Sara al Yafi

Sara al Yafi is the grand daughter of the late prime minister of Lebanon Abdallah al Yafi . He served   twelve times as PM between 1938 and 1969.

Known for his rigorous integrity and his political impartiality , Abdallah al Yafi is considered to be one of the most popular politicians in Lebanese 20th century history. His ethical behavior in public service is cited as an example in the official civic education high-school textbooks as well as in the graduation of law students.

Abdallah El-Yafi was an unprecedented champion of human rights in Lebanese politics, He was adamant on instilling a culture of righteous service in his children through “education, honest work, and a good personality.”

El-Yafi was at the forefront of the struggle to give women the right to vote, which he was able to achieve with his cabinet in power in 1952.