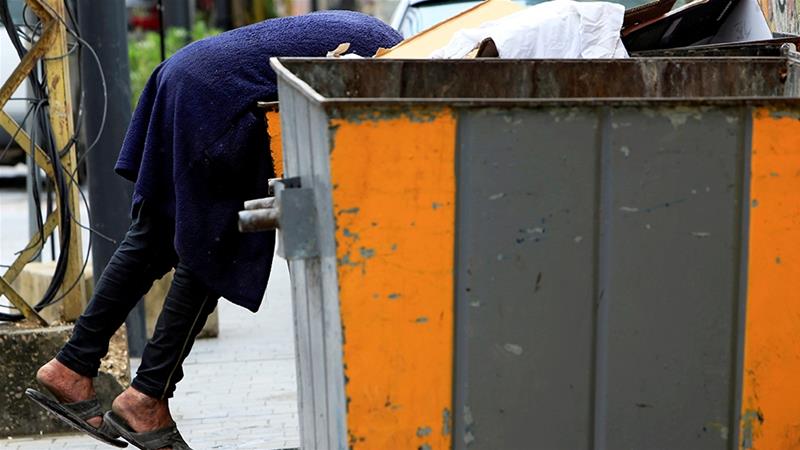 File photo: A man searches through a garbage bin during a countrywide lockdown to combat the spread of coronavirus in Lebanon where millions are at risk of going hungry [File: Ali Hashisho/Reuters]
Share:

But in a nation where many people blame the crisis on corruption and mismanagement, some analysts questioned MPs’ decision to cut at least $5 million from allocations for oversight and so-called capacity building to prepare for future shocks.

The World Bank, which agreed the loan in January, could not immediately be reached to comment.

The financing aims to cut extreme poverty by half through household aid payments of up to 800,000 Lebanese pounds, equivalent to less than $100 per month, as well as boost social services and fund the education costs of 87,000 students.

Parliamentarians who backed the changes to the loan’s spending structure said more poor families would be able to benefit as a result.

Ibrahim Kanaan, chair of parliament’s finance and budget committee, said the alterations would reduce running costs and make the programme “much better than it was before”.

Kanaan told the Thomson Reuters Foundation he had lobbied to slash spending on capacity-building because “in the past this never did its job. Large portions where mis-spent … there is a big margin for corruption”.

Other changes voted by parliament included cutting funding for an independent third-party monitor by half and reducing the timespan of an external financial audit to one year from three.

Instead of hiring companies to verify the eligibility of families for the handouts and oversee the payments, parliament voted to hand that task to the social affairs ministry and volunteers.

“What does Lebanon gain by slashing the budget for oversight and governance by a few million dollars while putting at risk the effective management of the $246 million programme?” said Mike Azar, a senior financial adviser based in Beirut.

He said such costs were often high for governments with weak institutions, but “the solution is to fix the institutions, governance and transparency, not slash the oversight costs which may end up costing the country much more in the long run”.

Few people in Lebanon trust government, and – citing the risk of corruption – rights groups and donors have said aid should be disbursed directly to people reeling from the economic crisis, COVID-19 and a massive August 2020 blast in Beirut.

The World Bank, which is partly financing the country’s COVID-19 vaccine rollout, threatened last month to suspend its support after some lawmakers got their vaccinations early.

They received the jabs during a February session discussing the loan endorsed on Friday.