Is Lebanon on the brink of a revolution ? 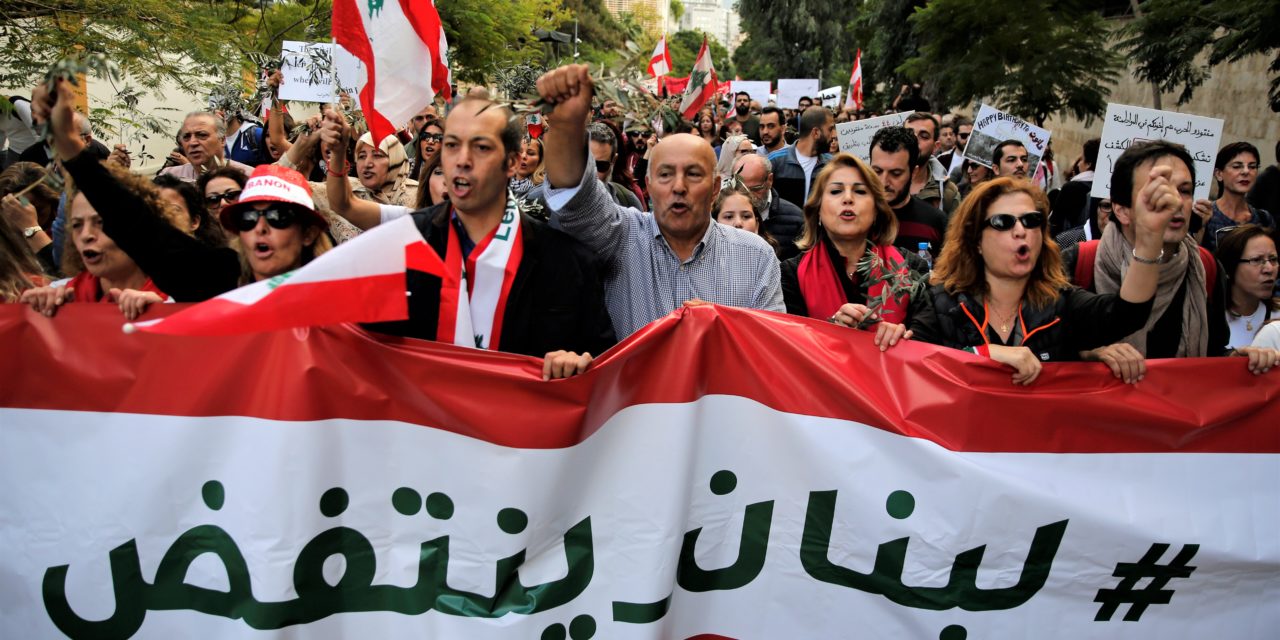 Lebanese protesters carry an Arabic banner that reads, Lebanon uprising, Beirut, Lebanon, Dec. 1, 2019. Protesters have been holding demonstrations since Oct. 17 (AP Photo Hussein Malla). The current all-time low of the Lebanese currency — known as the pound or the lira — has riled people all over the country. They have been pouring into the streets for more than a week now, taking the country to the brink of a revolution.
Share:

The current all-time low of the Lebanese currency — known as the pound or the lira — has riled people all over the country. They have been pouring into the streets for more than a week now, taking the country to the brink of a revolution.

A video that has been circulating on social media of the leader of the the Independent Nasserite Movement – Almorabidoun Mustafa Hamdan, in which he calls on people to occupy the Central Bank and go to the homes of politicians and the centers of main money changers went viral  .

The grand daughter of the late prime minister of Lebanon Abdallah al Yafi who  served   twelve times as PM between 1938 and 1969 described the Lebanese leaders as follows during an interview with France 24 :

“They are mafia lords, militia lords, a can of carcinogenic worms who thrive and survive in sectarian divides.”

She summed up what many Lebanese people had been feeling over the past year. “Hyperinflation is a rare phenomenon in the world, but it is the daily bread of the Lebanese people. This comes at the backdrop of a country that has seen no economic growth for years due to the incomprehensible incompetence of a dreadful ruling class, a damning ruling class that has invested none of our resources on any form of productive investment or societal nation-building but instead was spending, embezzling, stealing the funds of the Lebanese people to uphold their mafia feudal kingdom.”

Protesters are desperate as the government has for years failed to tackle the devaluation of the currency, poverty rates and the plummeting economy.

“We are denied our basic rights, such as security, education, water and electricity, even the air we breathe is polluted,” a protester on Beirut’s Martyr Square told DW’s correspondent Razan Salman via telephone.

The student is willing to keep protesting until the protesters’ demands are met. “It is unbelievable that the dollar is now worth 10,500 Lebanese pounds, which means that our currency lost around 90% of its value,” the man said, who asked to stay anonymous.

The Lebanese pound has officially been pegged to the US dollar since 1997 but has plummeted against the greenback in black-market trading.

Caretaker Prime Minister Hassan Diab has reacted by threatening to quit as caretaker in order to pressure local politicians to forge a new Cabinet.

“People have lost their hope and are utterly desperate. There is no indicator for the formation of a new government anytime soon. Just now, rumors have surfaced that there will be a total blackout in April, which adds to the feeling of insecurity on so many levels,” Anna Fleischer, program coordinator and analyst at the Beirut office of Germany’s Heinrich Böll Foundation Middle East, told DW on the phone.

From her point of view, an escalation of the situation is to be expected, as well as a decline in security. “People have a general sense of injustice that comes in addition to daily problems such as electricity, devaluated money, and hunger since basic food has become almost unaffordable,” she said and confirmed: “It has been unprecedented to this extent.”