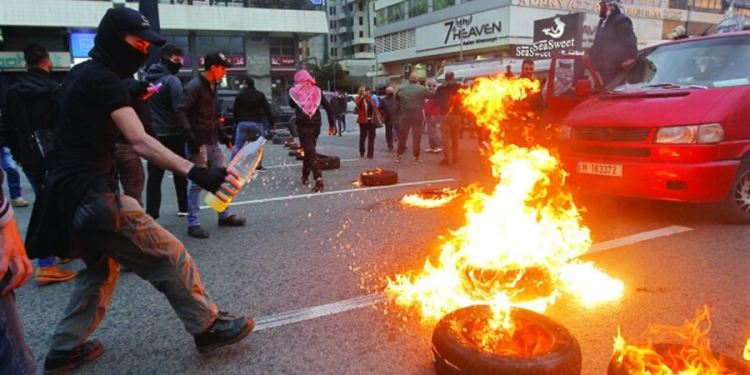 After what was described as ” the insane rise” of the black market dollar, which reached 12,500 pounds, protesters headed to the streets to protest over deteriorating living and economic conditions and blocked the roads in several cities
Share:

Lebanese on Friday protested the continued deterioration in living conditions and the severe collapse in the value of the Lebanese pound.

Anadolu Agency reported a rally from the Interior Ministry headquarters toward parliament in central Beirut in which protesters slammed financial and economic policies.

Retired Gen. George Nader, who is active in popular protests, confirmed that the protests would continue until the governing system is abolished. Other protests erupted across Lebanon, including the northern city of Tripoli where protesters blocked roads because of high prices and poor living conditions.

Demonstrations were also reported in Sidon and Jiyeh, southern Lebanon, because of the collapse of the currency.

Last week, the pound fell to 10,000 to the dollar, putting further pressure on the already deteriorating economy and living conditions.

Former Prime Minister Saad Hariri was designated to form a new government but is still at odds with President Michel Aoun regarding related matters.