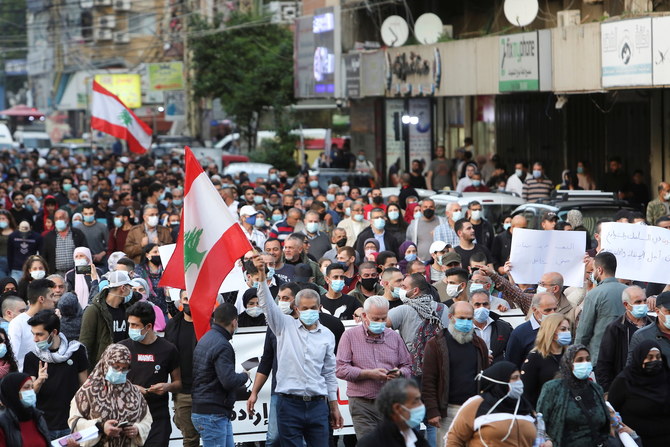 Demonstrators hold Lebanese flags as they gather during a protest against the fall in Lebanese pound currency and mounting economic hardships, in Sidon, Lebanon March 10, 2021. (Reuters)
Share:

BEIRUT: Lebanese troops on Wednesday reopened scores of roads closed by protesters across the country in the six past days amid anger at government inaction over the deteriorating economy.

Road closures slowed the national vaccination plan, stopped trucks transporting oxygen to hospitals across Lebanon, and resulted in the two deaths of two men when their car hit a truck blocking a highway.

Troops and security forces stepped in on Wednesday to prevent protesters in Hay Al-Sellom, a densely populated neighborhood in the south Beirut Dahye suburbs, from blocking roads with burning tires.

The army said that “as a result of the tragic accidents and violations that took place and in order to preserve the safety of citizens, army units this morning began to open closed roads.”

On Monday night, a car struck a truck blocking a highway north of Lebanon, killing both occupants instantly.

Protests also slowed the national vaccination rollout, which is still in its first phase, targeting the elderly and medical staff.

Fewer than 4,500 people had received the first dose of the vaccine on Tuesday, according to the health ministry, as access to vaccination centers was blocked.

Sharaf Abou Sharaf, head of the doctors’ syndicate, warned of “a rise in COVID-19 cases in the coming days since precautionary measures are not being fully followed.”

Access of oxygen supplies to hospitals, filled with coronavirus patients, was also hit by the protests.

Firas Abiad, director of the Rafik Hariri University Hospital in Beirut, complained about an alarming decrease in oxygen reserves due to the closed roads.

“Without oxygen, we will be losing lives,” he said.

Abiad also predicted a rise in the number of cases, saying: “Tough times are ahead.”

Meanwhile, protesters announced a strike on Friday, while others are planning to march on the interior ministry on Thursday.

The syndicate of public administration employees called for a strike by public sector workers from Monday, saying that “salaries and dignity have hit rock bottom.”

Worsening conditions meant many employees wanted to leave their jobs, which would lead to a collapse of state institutions, it said.

The syndicate demanded all employees receive a minimum of 1 million Lebanese pounds per month to meet the high cost of living until salaries are corrected.

The strike will coincide with a parliamentary session to approve a draft law related to a loan agreement between Lebanon and the World Bank for Reconstruction and Development in response to Lebanon’s economic and health crisis.

Nizar Hassan, a researcher in social movements, told Arab News that “after the Beirut blast, the Lebanese have been increasingly angry and desperate.”

Hassan added: “People doubt the relevance of the street protests, which is reflected in a decrease in the numbers of protesters. Some activists have fled the country since the blast, while others are still mourning.”

However, “hitting the streets will remain as a means to express anger,” he added.