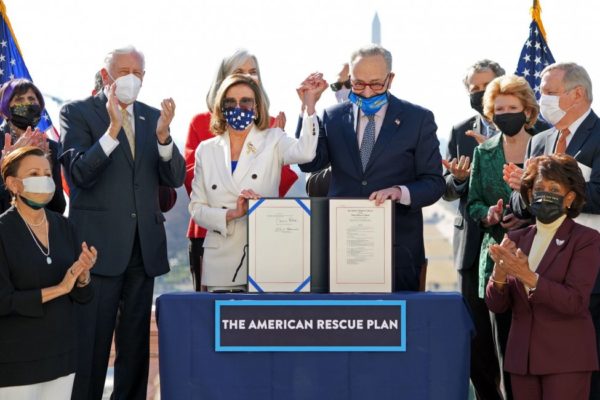 The legislation, which includes $1,400 direct stimulus payments as well as funding for vaccine distribution, an expanded child tax credit and recovery aid for state and local governments, passed by a vote of 220-211 largely along party lines.

No Republicans voted in favor of the bill and one Democrat, Rep. Jared Golden of Maine, voted against it. Rep. Tom Tiffany, R-Wis., did not vote.

“This is a momentous day in the history of our country,” House Speaker Nancy Pelosi said as she and Senate Democratic leader Chuck Schumer officially signed the legislation. “It would not have happened without a very collaborative spirit among our members.”

Schumer described Senate Democrats as “a seamless web” that worked together to ensure the passage of the legislation.

Biden issued a statement following the passage of the bill — his first major legislative victory and one of the most sweeping stimulus bills in American history — saying it was about giving a “fighting chance” to essential workers and other working people whom he described as “the backbone of this nation.”

“For weeks now, an overwhelming percentage of Americans — Democrats, Independents and Republicans — have made it clear they support the American Rescue Plan. Today, with the final passage in the House of Representatives, their voice has been heard,” he said.

In a press briefing on Wednesday afternoon, White House press secretary Jen Psaki said the administration is “moving full speed ahead on the implementation of the bill because we know the American people need help and need it as soon as possible.”

“Once it is passed, the bill text will be checked, rechecked, printed and signed by the appropriate leaders in the House and Senate,” she said. “The House clerks will then deliver it to the White House for the president’s signature. We expect that delivery to happen sometime tomorrow and then the president will sign it on Friday.”

After Biden signs the bill, the Internal Revenue Service will begin sending out $1,400 stimulus payments to individuals who earn up to $80,000. Couples who earn up to $160,000 will also receive a payment.

The legislation also will avert a lapse in benefits for millions that would otherwise expire on Sunday.

Many analysts, including the Organization for Economic Cooperation and Development, have hailed the legislation, saying it will turbocharge the U.S. economy amid a pandemic that has killed more than a half-million people and thrown millions out of work.

Rep. Jim McGovern, D-Mass., said Tuesday the bill attacks inequality and poverty “in ways we haven’t seen in a generation.”

The House began the voting process Wednesday morning as Democratic leaders said they received the legislation from the Senate on Tuesday after the upper chamber needed a little more time to finalize the bill. Tuesday night, the House passed a rule by a 219-210 vote that allowed for two hours of debate.

An attempt to delay passage of the bill by Rep. Marjorie Taylor Greene, R-Ga., was also defeated on Wednesday. Her motion to adjourn the House was opposed by 40 Republicans.

Prior to the vote, Democratic Caucus Chairman Rep. Hakeem Jeffries of New York told reporters he was “110% confident” the large-scale relief bill would pass.

“The COVID-19 pandemic is a once-in-a-century crisis,” he said on the House floor Wednesday. “It requires once-in-a-century comprehensive, compassionate and continuing congressional response. That’s what the American Rescue Plan is all about.”

House Republican leader Rep. Kevin McCarthy criticized Democrats for using the budget reconciliation process to pass the rescue plan, which allowed passage in both chambers without a single vote from Republicans.

“[Taxpayers] send the government tax dollars, but you only get a fraction of what you pay for, at best,” he said, arguing that the plan will cost taxpayers about $5,000 each.

“We know for sure that it includes provisions that are not targeted, they’re not temporary, they’re not related to COVID and it didn’t have to be this way,” House Republican Conference Chair Liz Cheney, R-Wyo., said in The Washington Post. “We could have had a bill that was a fraction of the cost of this one, it could have gotten bipartisan approval and support.”

Some Democrats have compared the rescue plan to the GOP-favored 2017 tax cut, which also cost $1.9 trillion, and the CARES Act a year ago, which most Republicans voted for.

“So much pain, suffering and death, and our Republican colleagues want us to do nothing,” Jeffries countered in his remarks Wednesday. “What is wrong with you?”

“We have over 70% of the American people think this bill ought to be passed,” Rep. Steny Hoyer, D-Md., told reporters Tuesday.

“I don’t know who our Republican colleagues are listening to … [but] this big and bold legislation fills an urgent need for our economy.”

The White House said Tuesday that paper checks with the new stimulus payment will have one small difference than the previous two, which were sent last March and in December — they will not have the president’s signature on them.

“We are doing everything in our power to expedite the payments and not delay them, which is why the president’s name will not appear on the memo line of this round of stimulus checks,” Psaki told reporters.

Former President Donald Trump was criticized last year when he asked that his signature appear on the first two stimulus payments, which have been the only two times in history that a president’s name appeared on an IRS disbursement. Typically, a civil servant signs checks issued by the Treasury to ensure that government payments are nonpartisan.

Trump’s signature went on the “memo” line of both prior payments, not in an actual issuing fashion, because the president has no legal authorization to sign any payments from the Treasury