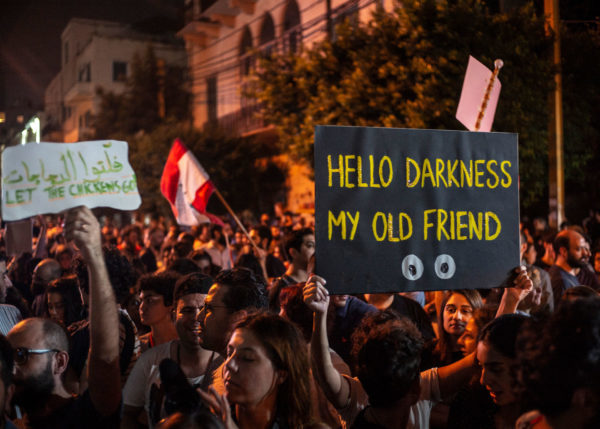 A protester holds up a placard reading, “Hello Darkness My Old Friend,” in front of the Lebanese electricity company headquarters, during protests against the Lebanese government and corruption, in Beirut, Lebanon, November 7, 2019. © 2019 Rafael Yaghobzadeh/Abaca/Sipa via AP Images
Share:

The Lebanese care-taker Energy Minister, Raymond Ghajar, yesterday warned that the country faces a total power outage at the end of the month if the funds needed to purchase fuel to generate electricity are not approved.

“Lebanon has sufficient funds to import fuel to generate electricity until the end of March, using an advanced payment from the treasury and if the necessary funds are not available, we may face a complete power outage after the end of this month,” Ghajar said in an interview with the Lebanese LBCI TV channel.

“We have sought in every way to secure an advanced payment for Lebanon’s electricity,” the minister said, explaining that he had asked the president, the caretaker prime minister, and head of parliament to approve an emergency loan for the state power company to purchase more fuel.

Iraq is scheduled to supply Lebanon with 500,000 tonnes of fuel to generate electricity, however, the country needs one million tonnes of fuel for power generation.

Over the past week, Lebanon has witnessed protests against the deteriorating living conditions and the collapse of the local currency, in addition to the failure to form a new government due to political conflicts between the ruling elites.

The exchange rate of the Lebanese reached nearly 11,000 LL against the US dollar, causing a significant rise in prices.