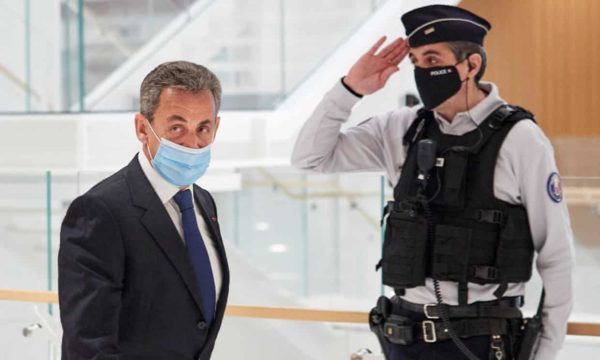 When the verdict came, it reduced the Paris court to a stunned silence: Nicolas Sarkozy was guilty of corruption and influence peddling, and sentenced to three years in prison, two of them suspended.

France’s president from 2007 to 2012 had played an “active role” in forging a “corruption pact” with his lawyer and a senior magistrate to obtain information on a separate investigation into political donations, the leading judge declared, and there was “serious and concurring evidence” of collaboration between the three men to break the law.

The conviction and sentence were dramatic, unexpected and historic. Sarkozy, 66, had repeatedly declared his innocence and dismissed the charges as an “insult to my intelligence”.

It is, however, unlikely he will spend a day in jail. His lawyer has announced he intends to appeal, a process that would lead to a new trial, and a one-year prison sentence can be served outside jail under certain conditions, including the wearing of an electronic bracelet or limited home confinement.

Sarkozy did not comment as he left the court but his wife, the supermodel turned singer Carla Bruni, on Instagram described the verdict as an “injustice”.

“What relentless nonsense my love,” she wrote. “The battle continues, the truth will out.”

While Sarkozy was not banned from holding public office, the verdict, delivered on Monday afternoon, is likely to quash his hopes of returning to public life in time for next year’s presidential election. His centre-right Les Républicains (LR) party has been struggling to come up with a credible candidate since Sarkozy’s former prime minister François Fillon was engulfed in scandal during the 2017 presidential race, opening the way for Emmanuel Macron to win.

At his trial last year, the court heard how Sarkozy instructed his lawyer, Thierry Herzog, to offer the senior magistrate Gilbert Azibert a cushy job on the Côte d’Azur in return for information on an investigation into whether he had received donations from the ailing L’Oréal heiress Liliane Bettencourt

The Bettencourt case was eventually dropped, but by then an investigation into corruption and influence peddling had been opened.

The judge Christine Mée, the president of the tribunal, said there was serious evidence of a “corruption pact” between Sarkozy, Herzog and Azibert. Herzog, aged 65, and Azibert, 73, were given similar sentences of three years, two suspended.

The case, based on telephone taps, became known as the “Bismuth affair”; Paul Bismuth was the name the former president employed in connection to two burner telephones used to communicate with Herzog.

French detectives began monitoring Sarkozy’s communications in September 2013 as part of an investigation into claims he had received an illegal and undeclared €50m donation from the Libyan dictator Muammar Gaddafi to fund his successful 2007 presidential campaign.

What they heard from the recorded conversations pointed investigators in a new and unexpected direction. They revealed the former president and Herzog were “secretly” communicating using mobile telephones registered under false names.

Additional wiretaps on these phones picked up conversations suggesting Sarkozy had been in contact with Azibert, then a member of the cour de cassation – the highest court in France – via Herzog to request confidential information about the Bettencourt case.

Sarkozy, who is embroiled in several legal cases, has repeatedly denied accusations of any wrongdoing in all past and present investigations.

He spent years attempting to have the Bismuth charges thrown out and the case dismissed. Herzog argued the secretly recorded conversations between him and Sarkozy were covered by client-lawyer privilege and could not be used as evidence.

Before his trial last year, Sarkozy had said he welcomed the hearing as a chance to “clean my name”.

“I am combative. I have no intention of being accused of things I haven’t done. I’m not corrupt and what has been inflicted on me is a scandal that will rest in the annals. The truth will out,” Sarkozy told BFMTV.

The former president is expected to appear in court later this month in yet another case, the “Bygmalion affair”, in which he is accused of overspending on his 2012 re-election bid.

He is also being investigated on allegations of influence peddling and “laundering of crime or misdemeanour” related to consulting activities in Russia.

Sarkozy supporters have accused French judges of making the former president the target of an unfair and relentless legal crusade.

He is the first former president to appear in court on criminal charges. His predecessor Jacques Chirac was charged and convicted, receiving a two-year suspended sentence, over fake jobs at City Hall when he was mayor of Paris – but was spared taking the stand because of ill health.

At the end of his two-week trial last year, Sarkozy’s said: “This case has been for me the stations of the cross. But if that was the price to pay for the truth to come out, I am ready to accept it … I still have confidence in the justice of our country.”

Herzog was also convicted of breaching the rules of professional secrecy between him and his client. Herzog and Azibert have announced they will appeal against their conviction.

After the verdict, Damien Abad, the president of LR’s parliamentary group, tweeted: “Today I want to again express my friendship with President Nicolas Sarkozy. His life has been a succession of trials that he has never ceased to overcome with energy and courage. Once again he will prove this. I am certain of it.”