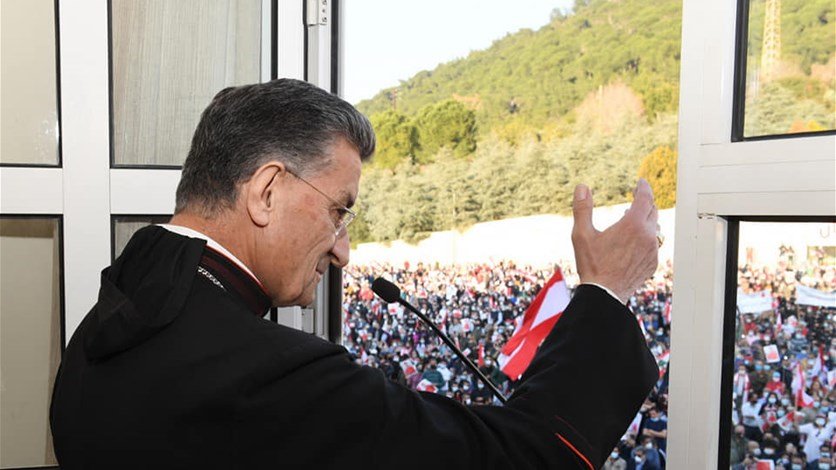 Lebanese from all over the country flocked to Bkerke on Saturday to support the master of the house, the Maronite Patriarch Bechara Boutros Al-Rai. I know Sunni activists from Tripoli and Shiites from Tyre who joined the crowd of supporters. This is “all of Lebanon to Bkerke and Bkerke to all Lebanon,” according to civil society activist Nawal Al-Meouchi, meaning the Maronite patriarch was speaking for all of Lebanon and has the support of all of Lebanon.

The crowd went to support the Maronite cleric after he was the subject of attacks by Hezbollah leader Hassan Nasrallah, who sent him a veiled threat by stating that the patriarch was seeking war. Lebanon is experiencing a deadlock in attempts to form a Cabinet, despite the country sliding into the abyss, as Hezbollah and its Christian ally President Michel Aoun are insisting on having a “blocking third” that would enable them to paralyze the government and give them control over the Cabinet. The patriarch has been calling for the neutrality of Lebanon and an international conference as the Lebanese have been unable to find a solution for themselves. He also called for the prevalence of “legitimate” arms, implying the need for Hezbollah to disarm. These calls by the patriarch resonated with most Lebanese, but there is one issue that should be the starting point for a solution that the patriarch has so far avoided: The resignation of Aoun.

Though the patriarch is on a collision course with Aoun, he has still not called on the president to resign. People close to the master of Bkerke have told me that he does not want to tarnish the presidency, which is the prime position for the Maronites in the Lebanese political system. He also does not want to create a precedent whereby the presidency becomes vulnerable to popular mood swings.

For the Maronite confession, the presidency is sacred, as it is a guarantee of influence amid a changing demography, in which the community’s relative size is decreasing due to immigration. Also, the Taif Agreement that ended the civil war in 1989 removed many of the Christians’ privileges. Their 6-5 majority in parliament was replaced with an equal share with Muslims and many of the powers of the Maronite president were transferred to the prime minister, who is usually a Sunni. Therefore, they view the presidency as their last bastion, especially as the region has been hostile to Christians with the rise of fundamentalist movements such as Daesh in Syria and Iraq.

However, Al-Rai’s attitude does not differ from that of his predecessor, the late Patriarch Nasrallah Boutros Sfeir. Following the assassination of Rafik Hariri in 2005, mass protests erupted demanding the resignation of President Emile Lahoud, who was an ally of the Syrian regime, the main suspect for the killing. Patriarch Sfeir stood firm and announced that the resignation of the president was a red line, despite the fact he did not have good relations with Lahoud.

However, today the situation is different. The protests are not the result of a general political mood but because Lebanon is nearing total collapse. The patriarch faces a conundrum. If the president resigns, there are two possible outcomes. The first is that the current Hezbollah-controlled parliament elects as president one of its two staunch allies, Suleiman Frangieh or Gebran Bassil. This would mean the current disastrous situation would persist for another six years. The other possibility is that the presidency remains vacant and its powers are transferred to the Cabinet, headed by the prime minister. The current prime minister-designate is Saad Hariri, a Sunni. How can the patriarch solve this dilemma of saving Lebanon while also saving the last bastion of Christian privilege in the country? Here a precedent in Lebanese history can be repeated.

In 1952, facing turbulence in the street, President Bechara El-Khoury resigned and appointed army commander Fouad Chehab, a Maronite, as the head of a transitional government that prepared for elections, which brought Camille Chamoun as president and stopped the country descending into turmoil. However, after Taif, the president lost the power to appoint the prime minister. The head of government can only be designated after compulsory consultations with parliament, which brings us back to getting the acquiescence of Hezbollah. Here, international pressure should be put on the group and the president to accept this outcome. Maybe a combination of pressure and guarantees would lead Hezbollah and Aoun to accept the commander of the army as the head of a transitional government of non-partisan technocrats. This government could conduct reforms, allow the space for free and fair parliamentary elections, and restore stolen funds. This path could lead to the salvation of Lebanon.

The head of the army is a Maronite. Though the tradition is for the head of the government to be a Sunni, by law there is nothing preventing a Christian from taking this position. This way, the Maronite confession does not lose its position at the helm of the state and the commander of the army is a consensual figure representing the Lebanese at large and not a specific faction.

The only person who has the legitimacy to make this proposition is the patriarch, who is the legitimate representative of the Maronites in Lebanon. He is the only one who can remove the cover from Aoun. In order to take this bold step, which could save Lebanon from total collapse, he needs international and, most importantly, popular support — as Al-Meouchi said — from Lebanon to Bkerke and from Bkerke to Lebanon.