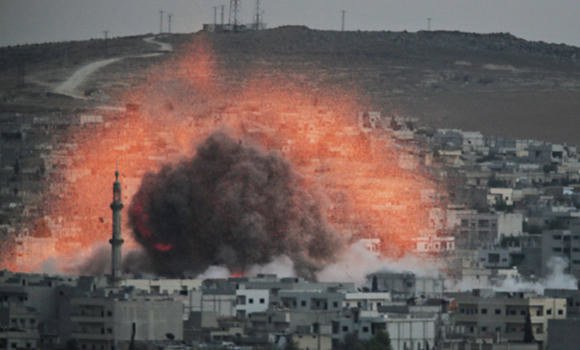 The United States conducted a military airstrike in eastern Syria along the border with Iraq on Thursday night targeting Iranian-backed militias in retaliation for a recent rocket strike in Erbil in northern Iraq that left several Americans injured, according to the Pentagon.

The airstrike targeted structures in the eastern Syrian town of Al Bukamal that belong to two Iranian-backed militias that have launched rocket attacks in the past against American facilities in Iraq, including the U.S. Embassy in Baghdad, according to a U.S. official.

“These strikes were authorized in response to recent attacks against American and Coalition personnel in Iraq, and to ongoing threats to those personnel,” Kirby continued. “Specifically, the strikes destroyed multiple facilities located at a border control point used by a number of Iranian-backed militant groups, including Kait’ib Hezbollah (KH) and Kait’ib Sayyid al-Shuhada (KSS).”

Another official described the airstrike as targeting a location through which both groups engaged in smuggling into Iraq.

“This proportionate military response was conducted together with diplomatic measures, including consultation with Coalition partners,” said Kirby. “The operation sends an unambiguous message: President Biden will act to protect American and Coalition personnel. At the same time, we have acted in a deliberate manner that aims to de-escalate the overall situation in both eastern Syria and Iraq.”

The airstrike was in retaliation for a Feb. 15 rocket attack against a U.S. base in the northern Iraqi city of Erbil that killed a coalition contractor and left several American contractors and a U.S. military service member wounded.

The airstrikes took place at about 6 p.m. ET Thursday.

Thursday’s airstrike “was probably calculated and scaled to avoid an escalation and send a message that Iran’s use of militias as proxies will not allow them to avoid responsibility,” said Mick Mulroy, a former deputy assistant secretary of defense for the Middle East and an ABC News contributor. “The decision to strike in Syria instead of Iraq was likely to avoid causing issues for the Iraqi government, a key partner in the continuing efforts against ISIS.”

As Biden administration officials said the attack remained under investigation White House press secretary Jen Psaki said last week that the U.S. “reserves the right to respond in the time and manner of our choosing” to the attack.

Earlier on Thursday, the Kurdish Government in northern Iraq claimed that it had identified suspects in the attacks and had provided that information to the Iraqi government and the U.S. military in Baghdad.

Thursday’s air strike was not the first time that the U.S. military has targeted Kait’ib Hezbollah. It did previously in retaliation for a rocket attack on a military base that killed two American service members, a British service member and wounded 14 others.