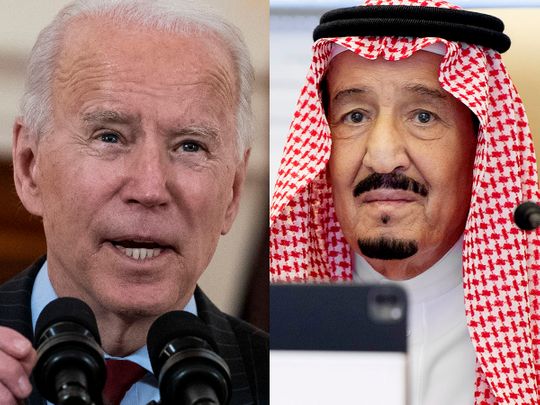 Washington (CNN) President Joe Biden spoke with Saudi King Salman bin Abdulaziz Al-Saud on Thursday ahead of the release of a long-awaited US intelligence report on the killing of Saudi insider turned dissident Jamal Khashoggi.

The congressionally mandated release of the report, which is expected to further implicate Saudi Arabia’s powerful Crown Prince Mohammed bin Salman in the Washington Post columnist’s death, is expected to take place imminently now that Biden and the King have spoken.

There was no mention of Khashoggi on the White House readout of the call, which said Biden welcomed the release of several Saudi-American activists and “affirmed the importance the United States places on universal human rights and the rule of law.” When asked Thursday by a reporter if it was a good call, the President replied, “Yes.” A source close to the Saudi government told CNN it “went well.” White House officials had said the report would not be released until the call had taken place.

The report’s release will be just the latest shift Biden is making, with support from Congress, in relations with US ally Saudi Arabia. Democratic lawmakers are expected to introduce a resolution on Friday to hold Saudi Arabia accountable for Khashoggi’s death and dismemberment as well as other human rights violations.

Biden and administration officials have stressed that they are committed to the kingdom’s security. At the same time, the President has ended US support for the Saudi-led war in Yemen launched by the crown prince six years ago.

Biden has also ordered an end to some weapons sales to the kingdom and will soon release the report, which is expected to highlight the prince’s lawless abuse of fundamental human rights.

Dennis Ross, who has worked on Middle East issues in multiple administrations, said Biden is using the report’s release to send a message to Congress, where bipartisan anger about Saudi Arabia simmered over the last few years, as well as to the kingdom itself.

“Apart from responding to what was a legislative mandate, it sends a signal to Congress and I think it’s also the administration’s way of saying to Saudi Arabia, ‘We’re not going to shield you from the consequences of bad behavior, and so it’s best to avoid those behaviors,’ ” said Ross, now counselor at the Washington Institute for Near East Policy.

“I think the Biden administration wants to demonstrate clearly that it is a new day after the Trump administration … also just to send a message to the Saudis that the relationship is going to be recalibrated,” Ross continued.

While the relationship is under strain, there continue to be areas where the US wants and needs to cooperate with the Saudis, including on regional counterterrorism, Ross noted. “It’s hard to imagine any issue in the region where Saudi partnership and support doesn’t play a significant role, but having said that, there have to be clear boundaries so we can temper Saudi behaviors that cross the line,” Ross said.

The administration may also be considering some sort of punishment for the Saudis after the report is released.

When asked if the administration would consider sanctions against those found responsible for Khashoggi’s murder, State Department spokesperson Ned Price said Thursday, “I expect that we will be in a position before long to speak to steps to promote accountability going forward for this horrific crime.”

Price added that Secretary of State Antony Blinken will have “full faith and confidence” in the findings of the report.

The release of the intelligence community’s report on Khashoggi’s killing is mandated in the National Defense Authorization Act. That law requires the director of national intelligence to give relevant congressional committees an unclassified report that includes a “determination and presentation of evidence with respect to the advance knowledge and role of any current or former official of the Government of Saudi Arabia or any current or former Saudi political figure over the directing, ordering, or tampering of evidence in the killing.”

The report’s basic conclusion is not expected to be a surprise.

Shortly after Khashoggi’s October 2018 killing at the Saudi consulate in Istanbul, the CIA assessed with high confidence that bin Salman had personally ordered the murder. In June 2019, a United Nations investigator found that it was “inconceivable” the royal heir hadn’t been aware of the operation.

Then-President Donald Trump, however, refused to condemn the Saudi prince, even after it became clear that Saudi Arabia’s initial claims that Khashoggi’s killing was a rogue operation were baseless. Instead, Trump dismissed intelligence that the prince had had a hand in the killing, saying that “maybe he did, maybe he didn’t,” and stressing that billions of dollars in US arms sales to Saudi Arabia weren’t worth sacrificing over the matter.

In contrast, Biden declared during a November 2019 Democratic presidential candidates’ debate that “Khashoggi was, in fact, murdered and dismembered, and I believe on the order of the crown prince.”

Biden went on to say he “would make it very clear we were not going to, in fact, sell more weapons to them, we were going to, in fact, make them pay the price and make them, in fact, the pariah that they are. There’s very little social redeeming value of the — in the present government in Saudi Arabia.”

Biden then drew a parallel between the Khashoggi murder and the terrible humanitarian toll in the Saudi-led war in Yemen, saying he would “end the sale of material to the Saudis, where they’re going in and murdering children, and they’re murdering innocent people. And so they have to be held accountable.”

White House spokeswoman Jen Psaki said last week that the President is working to “recalibrate” the US relationship with Saudi Arabia and will communicate with Saudi King Salman bin Abdulaziz Al-Saud, instead of the crown prince.

“The context here is the Trump administration approach to Saudi Arabia, which was so ‘see no evil’ that a recalibration was inevitable,” said Robert Satloff, executive director of the Washington Institute of Near East Policy.

“This doesn’t mean that the crown prince is going to be in diplomatic purgatory for this administration,” Satloff said. “Rather, this means there will be an early expectation of steps that need to be taken a) to define the boundaries more clearly and b) to define what constitutes ‘accountability’ for the Khashoggi killing that President Biden called for on its anniversary.”

Khashoggi’s murder was “obviously an extreme example,” but just one of several events that have caused real concern, Satloff said, leading the administration “to lay down the marker that for us to have the type of relationship we’d like to have, a partnership, there need to be substantial structural changes.”

Lawmakers are working to ensure there’s structural change in the relationship as well.

“It’s welcome news that the White House is releasing this info on Khashoggi that my colleagues and I have requested since his brutal murder,” Democratic Rep. Ro Khanna of California told CNN.

Khanna, a co-lead on a letter from lawmakers to the administration about Yemen, said there is “widespread support in Congress for the Biden administration to uphold their campaign promises of entirely ending military support to the Saudis and the [United Arab Emirates], which is imperative for the US to support an end to hunger in Yemen and the beginning of a political solution.”

The letter comes as two Democratic members of Congress — Reps. David Trone of Maryland and Gerry Connolly of Virginia — are expected to introduce their resolution to hold Saudi Arabia accountable for Khashoggi’s death and other human rights violations.

The resolution will call “for significantly reduced US assistance to Saudi Arabia until the kingdom demonstrates true accountability on human rights, rule of law, and nuclear issues,” Trone said in a letter to colleagues obtained by CNN on Thursday.

It also “seeks to curtail nuclear cooperation until Saudi Arabia signs a 123 Agreement for a civil program that expressly prohibits enrichment of uranium on Saudi territory,” Trone said in the letter.

The resolution is expected to be introduced after Biden speaks with King Salman and following the release of the intelligence report.