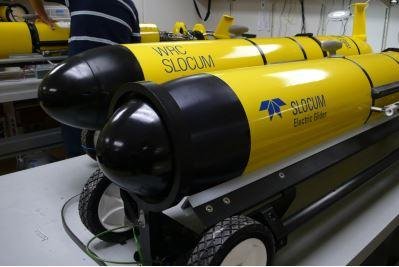 The system would improve the current Littoral Battlespace Sensing Glider, which generally deploy from oceanographic survey ships and would measure water conditions in areas to help fleet operational planning or hunt enemy submarines.

The Navy announced a request for proposals this week.

About 180 sensor gliders are in use by the Navy, and manufactured by defense contractor Teledyne Brown Engineering of Huntsville, Ala. The request classifies the drone under “Search, Detection, Navigation, Guidance, Aeronautical, and Nautical System and Instrument Manufacturing” categories.

The new LBS-G drone will be expected to operate for90 days at a time, dive to 657 feet, spend much of its time at the bottom of the sea, surface when it needs to transmit data to a satellite and take water samples every two seconds.

It would work in conjunction with Navy submarines and ocean surveillance vessels for maneuvers and ocean research.

The push for oceanic research is a part of the Navy’s reliance on its submarine fleet, with the drones serving as an anti-submarine warfare asset. One currently used drone was captured in 2016 by China, which returned it after referring to it as a hazard to navigation.