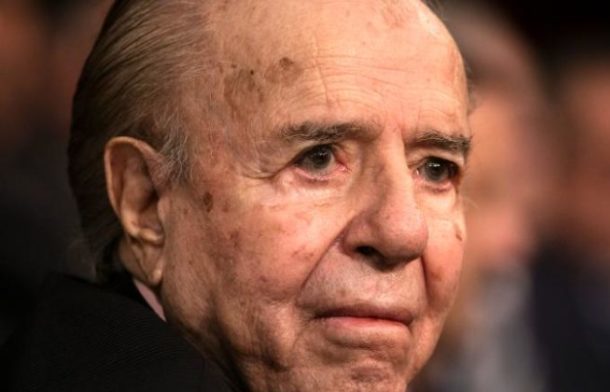 Former President Carlos Menem looks on during the opening session of the 138th period of the Argentine Congress on March 01, 2020, in Buenos Aires, Argentina.
Share:

Menem took office in July 1989 and promoted laws to reform the government and the economy after his predecessor, Raúl Alfonsín, resigned in the middle of a deep financial crisis caused by hyperinflation. Menem privatized some companies that had until that point been under state authority and was able to get inflation under control.

Menem left office in 1999 after unsuccessfully trying to modify the constitution to run for a third term. He ran again for the presidency in 2003, obtaining the highest percentage of votes during the first round of elections, but ultimately decided against advancing to the second round.

He remained active in politics by becoming a senator with the Justicialist Party representing La Rioja province from 2005 until 2019. He then joined forces with the Peronist coalition called “Front of All” and was re-elected to another term that would have run until 2023.

Menem had three children with his wife Zulema Yoma, before the couple divorced in 1991. He later married Chilean TV host and actress Cecilia Bolocco, with whom he had one child. Their marriage ended 10 years later.

The lawyer son of Syrian immigrants in La Rioja province, 750 miles (1,200 km) west of Buenos Aires, Menem became active in the Peronist party in the 1950s and 1960s and visited party founder Juan Peron in exile in Spain in 1964.

After a 1976 military coup Menem was arrested and imprisoned for five years, a time he dedicated to planning his bid for the presidency.

After his release he was re-elected governor two more times.

His body will lie in state at the capitol building before being buried in an Islamic cemetery in provincial Buenos Aires.

“Above all, he leaves us with memories of a good person, whom I will remember with great affection,” former President Mauricio Macri tweeted.